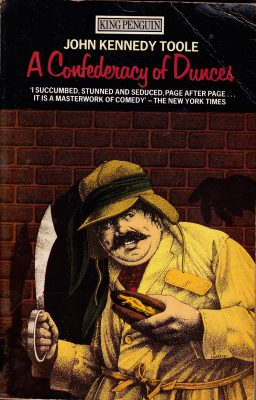 “What I want is a good, strong monarchy with a tasteful and decent king who has some knowledge of theology and geometry and to cultivate a Rich Inner Life.”

Incredible book. Maybe the funniest ever written. I dearly wish I could go back in time and experience it again for the first time.

How did Toole, a 26 year old who lived in a few places and met a few people, write a satire so sharp and cutting? And universal? You will encounter nearly every person you have ever met in A Confederacy of Dunces, and witness nearly every social absurdity. The book is a high-wattage laser focusing on excesses of human behavior until they either glow or shatter. It’s like an American version of Waugh’s comic novels: not as well-written, but funnier, moving with a lighter step, and with even more vivid characters.

He feels a sullen, burning anger against all of modernity. He is proudly jobless (“Apparently I lack some particular perversion which today’s employer is seeking.”) and occupies himself by writing “a lengthy indictment against our century. When my brain begins to reel from my literary labors, I make an occasional cheese dip.” He is laughable, gaseous, and contemptible, the spiritual ancestor of the neoreactionaries. He offends nearly everyone he meets, although not half as much as they offend him. He feels a kinship with the “Negroes”, however, his brothers in societal oppression.

But Toole makes Ignatius sympathetic, despite his tirades and hubris. We’ve all met this guy, or been him. He’s the kid who never got invited to any parties and has decided that it’s just as well: he’s too civilized for those nasty brutes. The sadness at the heart of Ignatius’s self-delusions cause something even stranger to happen, we start to like him.

Francois Truffaut famously said that it’s impossible to make an anti-war film because the nature of film makes exciting. Literary fiction (where we can see inside a character’s head and can witness their internal logic) does the same for egomania. From the outside, Ignatius is intolerable. From the inside, his gale-force personality wins us over. He does indeed have, as he puts it, a “Rich Inner Life”.

After a car accident puts the family in debt, Ignatius is faced with the horrific fate of having to work at a job. The bulk of the novel involves him trying to do so, and failing. The actual story’s pretty thin and episodic: this reputedly scotched its chances of publication within Toole’s lifetime – it was rejected by Simon & Schuster’s Robert Gottlieb because, apparently, he saw no point to it.

But there is a point: the ways arrogance is a mask for insecurity. Everything Ignatius says and does is a rationalization for his own failures. He watches far more movies than most people do, but justifies himself by saying he’s injuring himself against “perversion and blasphemy”. When he struggles to fit into a uniform, he laments that it’s made for a modern person’s “tubercular and underdeveloped frame”. In his off-hours, he writes invective-filled letters to a young female beatnik socialist named Myrna Minkoff who he is obviously obsessed with.

Myrna Minkoff is another character who comes alive on the page, which is saying something, because we never meet her until the end. She writes long letters back to Ignatius, focusing on his physical inadequacies, sexual repression, and urgent need for therapy. Supposedly, she is based on the hyper-aggressive female activists Toole encountered while teaching in New York. “Every time the elevator door opens at Hunter [University], you are confronted by 20 pairs of burning eyes, 20 sets of bangs and everyone waiting for someone to push a Negro.”

She is the opposite of Ignatius politically, but his equal at deluding herself. She’s putting on a play about interracial marriage, and has forged links with the female black co-star. “She is such a real, vital person that I have made her my very closest friend. I discuss her racial problems with her constantly, drawing her out even when she doesn’t feel like discussing them — and I can tell how fervently she appreciates these dialogues with me.”

There are other characters: a couple of ess-doubleyous at a French Quarter strip club, some gormless souls at a family-owned jeans factory, a bumbling police officer, etc. They are interesting on their own but become dim shadows when set against Ignatius and Myrna.

The book is famous for its detailed depiction of New Orleans. I always dislike it when reviewers say something like “the city’s almost like another character!” Cities are cities and characters are characters. An urban environment doesn’t have to be a person to be interesting, that’s just anthropomorphism. But New Orleans – the patois, the heat, the culture-clash – is an inseparable part of why Confederacy works. Whenever the action threatens to get a bit too ridiculous there’s always that anchor to pull it back to reality – this sense that it’s in a real place that actually existed. Little details, such as the daily life of a hot dog vendor, are rendered in believable accuracy.

The best part? The dialog. Confederacy is possibly the most quotable book ever written. I can recite large sections of it from memory.

“In my private apocalypse he will be impaled upon his own nightstick.”

“Do I believe the total perversion that I am witnessing?”

“If you molest us again, sir, you may feel the sting of the lash across your pitiful shoulders.”

“This liberal doxy must be impaled on the member of a particularly large stallion!”

“Go dangle your withered parts over the toilet!”

And so on. The book’s a ridiculous caricature, but like a caricature, we recognize everything it. Forty years after it was published, the book still seems eerily accurate to how people think and behave. Maybe life is more limited than it seems: its complexity spun out of a few repetitive people and scenarios, just as a jewel’s intricacies can be understood from seeing a single facet. Either way, when Confederacy of Dunces reaches its disastrous end, you’ll want Ignatius to prevail in his one-man war against the modern world.