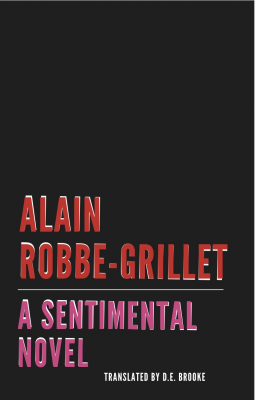 “…putting Sade back on the bookshelf” is how Le Figaro describes this book. If anyone has A Sentimental Novel on their bookshelf, it’s with a fake cover, the spine turned inward, and probably an explosive self-destruct device fitted so the the book can be safely 451’d if the police come knocking.

Robbe-Grillet’s final work is short and lacks a narrative. It’s a sequence of pornographic vignettes, where nymphets of questionable legality are defiled by middle-aged male châtelains exactly like the author (don’t ask questions). This is the kind of book where you hear the word “nubile” and the author isn’t trying to be funny.

On one hand, I approve of books written by maniacs. On the other, the world has moved past the Marquis de Sade, and Robbe-Grillet just retreads familiar ground for the most part. It’s well-written (or flattered in translation), but to what end? Bataille, Huysman, and Comte de Lautréamont wrote far more imaginative and creative work a century ago, and they lived a century ago. Robbe-Grillet spent a lifetime championing le nouveau roman. Was he trying to champion le vieux romain, too?

A Sentimental Novel is hard to analyse. Airy and light. Floaty. There’s an intentional lack of substance to the book that makes it strangely affecting, but which also renders it averse to study. Barthes described Robbe-Grillet’s style as “a theory of pure surface” (or I think he does – I can’t find a source for this quote), and that’s very evident: A Sentimental Novel is a neverending plain of surfaces, with your eye forever bouncing off them. The prose displays everything, but displays nothing. We get descriptions of reflections glissading across a set of shears as they snip away a nipple. Whose shears? Whose nipple? Why? It’s all heat. No light.

In this sense, at least, Robbe-Grillet leaves his inspiration behind. Donatien Alphonse François’s books were always clearly about something: they’re notoriously full of political and philosophical rants (to the point where they’re turgid and boring). But a critic will have to dig very deep to find meaning in A Sentimental Novel, and any interpretation is probably 90% critic, 10% book.

I’m personally not impressed by writers that word-vomit imagery and burden the reader with the task of “interpreting” it. It’s not that the author is lazy (effort doesn’t matter in art. It’s  not weightlifting). It’s that if the meaning is all coming from my own mind,  why do I need Alain Robbe-Grillet in the picture? I enjoy thinking about books, and analyzing them, but I’d ask that the author at least meet me halfway by taking responsibility for the things on the page. A Sentimental Novel could be a Sade written by a computer. There’s no crests, no rises and falls, no build-ups, nothing.

Does transgressive literature have a future at all? Maybe it’s in the too-gay-to-function Dennis Cooper, the computer-mangled sentences of Kenji Siratori, the alt-lit of the web, the heart-freezing paralysis of Michel Houellebecq. Writers who are doing something new, however incompetently.

Even average writers like Palahniuk and Ellis are able to find new angles to exploit, such as capitalism, mass media, and so on. They’re not just rewriting Sade for the millionth time. Meanwhile, here’s Robbes-Grillet toiling alone in an abandoned mine, seeking gold in a shaft that was mined out a century ago.