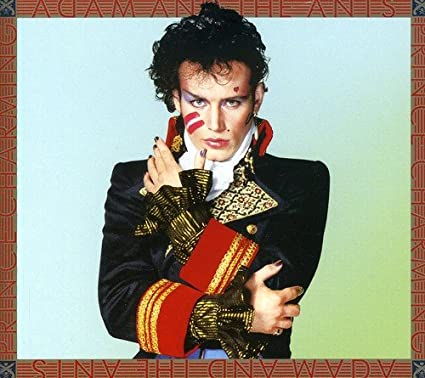 Bowie had a stock response to chameleon comparisons: “a chameleon’s trying to make you ignore him…that’s not my ambition!” Nor was it Adam Ant’s, who came from a similar art school background and cycled through an even more outlandish cast of characters: Indian brave, highwayman, cossack: visuals that sold (and were sold by in turn) some of the most exciting songs of the early 80s.

The first Adam and the Ants record is jittery, cold, and fraught, like ice cubes rattling in a glass. The second is a much easier listen, featuring powerful African-influenced drumming and really catchy songs. This is the third, which, as the title would suggest, is extremely charming and easy to like. It thus overcomes big problems, such as nearly every song on side B sucking.

It’s made of similar stuff to Dog Eat Dog, meaning sharp layers of vocals and guitars interspersed with empty space that crackles with energy. There isn’t the omnipresent Burundi drumming of Dog, but the busy tom fills achieve much the same effect. “Scorpios” is a nice, sprawling song with horns and many-tracked vocals that seems to stretch itself out on the airwaves. “Picasso Visita El Planeta De Los Simios” is even better, featuring lacerating funk-inspired guitar. “Stand and Deliver” is an amazing classic that summarises Adam Ant’s career, like a leaf that looks exactly like the tree it came from. Energetic danceable post-punk decked in brilliant visuals that saturate the music beneath it.

Quality control issues become evident as Prince Charming progresses. “Mile High Club”: dogshit. “Mowhok”: dogshit. “Ant Rap”: dogshit inexplicably released as a single. This is another trend of Ant: about half the songs absolutely do not work, despite containing similar ingredients as the ones that do. At least the bad songs mostly run together this time, so skip button jockeying isn’t necessary.

Ant broke through in the gulf between two eras, like a surfer trading one wave for another. The Ants were originally signed (according to Adam) because Decca Records wanted “in” on the then-waning punk rock trend, and grabbed the nearest band to hand. Then they blew up in the MTV music video era, when listeners started using their eyes as well as their ears and it began to pay to not be an absolutely hideous fucking goblin.

You know what they say about Elvis: 90% of what he did was worthless, and the last 10% made him king. Adam Ant was inconsistent, but when he was good, he was very good. You might say he burglarized the king.