Am I Cool Or What? 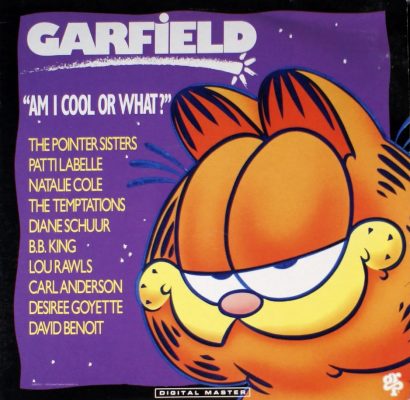 It has long been known that Garfield only has value as a deconstruction of itself. Jazz/R&B label GRP Records accidentally discovered this fact in 1991 when they released Am I Cool Or What?, the first ever Garfield concept album.

“Garfield concept album” sounds like a 4chan musical shitpost like Lolishit or MoonMan. Incredibly it’s a real product that exists and can be transacted for money. GRP released it on both cassette and CD, for a double dose of Garfield madness.

You might suspect that the Garfield mythos cannot support a full-blown concept album. The character isn’t exactly Ziggy Stardust: Garfield is to comics what “Jim Davis” is to names, a desolate TS Eliot wasteland of unfettered blandness. I was a Garfield fan for ten seconds in 1997 because it replaced a comic I hated (Cathy) in the Sunday paper. Then I actually read it and realized I’d cured a toenail disease with an amputation. It was the least funny thing I had ever seen. You can’t even use it as lavatory paper, because any paper containing Garfield already has shit on it by definition.

Want to know why Garfield sucks? It’s often asserted[1]once, by a guy on Quora that this is the all-time funniest Garfield strip…

…you’ll notice that Garfield is pointless. Not only could he be removed without affecting the gag, he actually makes it worse by being there. Why is he reacting in disappointment? Who wants to hear a long sponsored message? It’s peabrained nonsense, even within its own universe.

What can you do with a character so bland? What can’t you do? GRP’s pitch meeting must have gone like this:

“Our market research team has identified four traits with the core Garfield brand: he’s lazy, he’s fat, he eats lasagne, and he hates Mondays. If we took each of those traits and wrote a song about it we’d have almost 50% of 1/2 of a real, honest to God album! Ka-ching! This is an even better idea than our Samuel ‘Screech’ Powers prog-rock suite!”

Obviously they had to pad it out some. Neither “I Love It When I’m Naughty” and “Next to You I’m Even Better” have anything to do with Garfield. I think they were included because they were written by a person called Catte Adams, by which standard Cat Stevens, Jon Bon Jovi, and One Direction should be on here. You know…OD? Odie? Yeah, if Jim Davis could write KWALITY JOKES like that the comic would be cooking with gas.

The music isn’t an afterthought: that would imply thinking at all was involved. It’s very cheesy and cheap, with sampled lifeless drums that sound like they’re coming off a midi keyboard. It doesn’t sound close to jazz, it’s more like New Kids On The Block or Billie Ocean or something. “Shake Your Paw” has a stuttered horn sample (think “Owner of a Lonely Heart” by Yes) but that’s the only musical point of interest I can recall.

What’s amazing is that they recruited a stable of R&B/soul greats to make this turd. BB King. The Temptations. Natalie Cole. Just how broke were those guys by 1991? That leads to a fascinating possibility: with the demise of the music industry, there has never been a better time to recruit legendary musicians for cheap. Who’s with me? The world must hear Am I Cool Or What? II.