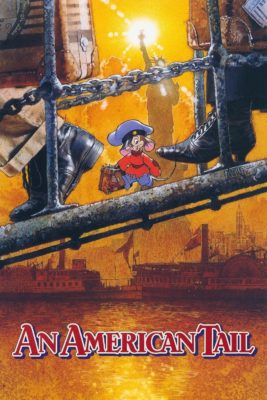 Movies about animals are legally required to have a pun in the title, and An American Tail walked so that Dog With A Blog and Alvin and the Chipmunks: Chipwrecked could run.

It’s one of the grim, high-concept films Don Bluth made after he left Disney. Secret of NIMH, An American Tail, and The Land Before Time are famed for their craftsmanship, but they’re tough sledding, darker than any Disney film except for The Black Cauldron. A lot of people remember these films as classics. A lot of them have forgotten that these films made them very scared or sad.

The setting is 19th century Russia. Fievel Mousekewitz’s family lives in a mousehole under a shtel, but then Cossacks burn down the shtel, while a gang of cats destroy their home. Tail is obviously an antisemitism parable, with mice representing (Jews and cats goyim). It’s setting is generations earlier than Maus, but it was still close enough for Art Spiegelman to ominously rumble about a lawsuit.

The opening scene is hilarious, with mice being chased around by fez wearing, black-mustached cats roughly the size of Shetland ponies. Their growls have been pitch-shifted down to half-terrifying, half-comical gurgles. If cats breathed radioactive fire, this would be a kaiju film.

The displaced Mousekewitzes board a steamer bound for America, where (they have been told) there are no cats. Fievel unwisely ascends to the fore-deck during a storm, is blown overboard, and eventually washes ashore on New York in a bottle. The rest of the film involves him looking for his family, along with some other complications.

Tail’s plotting is less surefooted than NIMH’s or Time’s. After the main drama is established (“Fievel has lost his family”), a huge number of supporting characters are dumped into the story – a friendly pigeon, a streetwise Italian mouse, a rabble-rousing agitator, a rich lady mouse, a back-slapping politician type, a helpful vegetarian cat, and more – turning the film into a top-heavy mass of character right when it needs to be racing into the third act.

I remember being confused when I first saw it. I couldn’t follow the story: it just became a series of events. Although the final showdown is impressive and memorable, the villain was so forgettable that I did exactly that.

And although the animation has the Bluth soul, it looks visually dull next to his other films. Secret of NIMH sparkled and twinkled, as if the cel sheets were studded with jewels. The Land Before Time was imbued with the hot, ferocious glow of the old world. Tail is just plain colorless. Dark seas. Sewers. City streets blanketed in smog. Average out all the pixels in the film and you’d get a muddy green-gray.

But it’s heartfelt, for all that. And again, the final showdown is both exciting and clever in how it pays off IOUs incurred at the start of the movie.

Roger Ebert criticized the film for being about anti-Semitism while not explaining this in a way that children can understanding.

One of the central curiosities of “An American Tail” is that it tells a specifically Jewish experience but does not attempt to inform its young viewers that the characters are Jewish or that the house burning was anti-Semitic. I suppose that would be a downer for the little tykes in the theater, but what do they think while watching the present version? That houses are likely to be burned down at random?

I understand his point, but children can hear music without understanding the words. Bigotry’s not a complicated concept, and you don’t have to be up to speed on the cultural milieau of 1880s Russia to have encountered smaller versions of it, like playground bullies who pick on you because you look different or talk weird.

We’re not meant to sense any difference between the cossacks and cats: they attack at the same time, like they’re part of the same collective evil. Additionally, the Mousekewitzes are clearly different from the others in a way that transcends species. One of Fievel’s problems in America is that everyone think his name sounds silly, so he changes it to a more goyische Phil. This is matched by a shot of a human Jew likewise changing his name. It’s pretty well done and I had no problems understanding it.

In short, a messy but compelling picture. It’s not true that Don Bluth could do no wrong, but he was doing very little of it the 80s.

Disney’s The Great Mouse Detective came out the same year, with nearly the same concept (a society of mice running parallel to ours). An American Tail is a worthy example of an animated twin film, along with Aladdin and The Princess and the Cobbler in 1992-3, Antz and A Bug’s Life in 1998, The Road to El Dorado and The Emperor’s New Groove in 2000, Treasure Planet and Sinbad: Legend of the Seven Seas in 2002/3, etc. How to explain this? Animated films typically take years to make, which prohibits quick imitations and knockoffs.

(I got Mandela effect’d. I distinctly remember that Fievel sees whales when on the ship. On the rewatch I conducted for this review: nope, no whales. His father describes “fish as big as this boat”, and we hear mournful whalesong, and a later Don Bluth film – The Pebble and the Penguin – features whales, so maybe my brain made mistaken connections. Another example of how movies in memories are not real movies.)