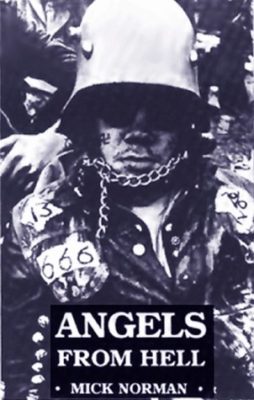 Mick Norman (the pen name of Laurence James) wrote four Angels from Hell novels in the 1970s, and this 1994 collection from Creation rescues them from out-of-printness.

The rescue effort was worth it: they’re fast, brutal, addictive novels about biker gangs, set in a dystopian 1990s Britain. Petrocarbons are burned, laws are broken, women are deflowered. The novels are short and were clearly quickly written (why didn’t Creation fix the copy errors?), but they’re loaded with energy, heart, and humor, and the only parts that have dated are the parts that don’t matter. There are read-in-one-go books; this is practically a read-in-one-go series.

Disillusioned vet Gerald Vinson becomes a patched-in member of the Last Heroes chapter of the Hells Angels, where his intelligence, training, and leadership abilities soon see him in command of the charter. But when you ride a tiger you can’t ever get off, and Gerry is enmeshed in Forever Wars against rival chapters, switchblade-wielding football hooligans, crooked journalists, and a fascistic British government that seeks to destroy the Angels (given the hundreds of homicides the Angels are involved in over the course of the series, one sees their point).

The main character, of course, is almost the bikes themselves. They serve the same function as horses do in Westerns – both a method of transportation (you can go almost anywhere on a bike, and very quickly) and symbol of masculinity. One way to know shit’s about to go down in the books is that a biker has his “hog” sabotaged or destroyed.

The political incorrectness is high. Mick Norman doesn’t seem to like homosexuals: his villains are flamboyantly gay far more frequently than chance would predict. I also don’t believe there’s one female character who isn’t killed, raped, threatened with rape, beaten to a pulp, or some combination of the previous – aside from the old lady at the start of Guardian Angels, who merely has a severed head flung through her car’s front windshield. There’s one British-African character that I can recall. He provides help to Gerry, and he and his family get burned to death by Gerry’s enemies for their trouble.

If I had a complaint, the books get smaller in scope as they progress, instead of bigger. The first one (Angels from Hell) is Gerry vs the government. The second (Angel Challenge) is Gerry vs a rival chapter. The third (Guardian Angels) is Gerry vs a couple of hoodlums. The fourth (Angels on my Mind) is Gerry vs a single psychotic cop, who (in a scenario reminiscent of Stephen King’s Misery, which it precedes by fifteen years) has illegally detained him in a basement, where his even more batshit psychologist wife seeks to “study” him.

They’re fine tales, but the first has an exhilarating sense of “us against the world” that is never quite recaptured, replaced instead by weary Ballardian nihilism.

The bikers = cowboys metaphor I posited above breaks down quickly. Cowboys in the paperback Westerns always had pro-social goals – saving towns from bandits and cattle rustlers is a noble deed. But none of Gerry’s men and women are good people. Their world has no use for good people. Nice guys don’t just finish last, they finish in body bags. But they also don’t have any long-term goals; everyone seems to be staring into the same black pit. Their battles and rides lead to more battles and rides. What’s the point? But then, what’s the point of a biker gang in real life? To have brothers? A brother that’s going to squeal on you at the first scent of a plea bargain?

How do you write a novel about a bad person and persuade the reader to care? Typically, by making the other characters even worse – gangster films traditionally pit “good” criminals (honorable men, bound by loyalty and brotherhood) against “bad” criminals (unprincipled lunatics). It’s sort of like making your worst-smelling clothes smell good by rubbing your nose in shit. Norman’s approach is different: he makes the “straights” equally bad, just in a different way. One of the books ends with an open-ended question: who is to blame for the Angels? They didn’t fall out of the sky. Our society made them. Our society will make more of them.

The best book is Angel’s Challenge, which features an absurd premise that at least gives the story some anchoring: two biker gangs agree to a scavenger hunt across London, with the losers being forced to disband and burn their colors. But in the third book, an existential loneliness sets in. The fascistic government is out of power. There’s nothing left to do, and Gerry’s bikers end up working as roadies for rock bands (echoes of the legendary Altamont Free Concert in 1969, where a Hells Angels security detail ended up fracturing skulls and stabbing people). They are empty men inside. It’s a miracle that they don’t shatter like eggshells when they crash.

They have their freedom, at least. Freedom to do what?