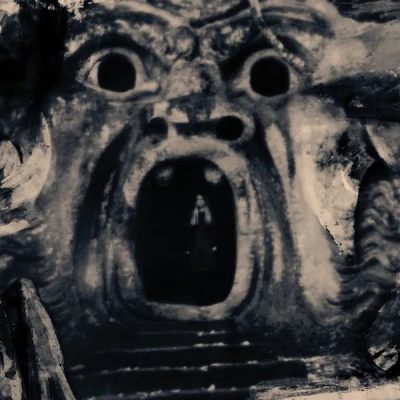 My favorite music from 2020 is All Thoughts Fly, a forty minute instrumental album with one huge instrument raging against its walls.

All Thoughts Fly is written so that there’s room for nothing else except a quarter-comma Meantone-tempered pipe organ. A second instrument would have killed it, and vocals would have buried it. Thomas Aquinas once said “hominem unius libri timeo” (“I fear the man of a single book”). Of All Thoughts Fly he might have said “hominem unius organum musicum timeo”. It’s formidable in what it achieves with a limited set of tones: maximal miminalism. At times it’s forceful enough to punch a hole through reality, but it also attains moments of subtlety, and even sublimity. Let go of the safety rails and listen to it.

It’s inspired by Sacro Bosco, or “Sacred Grove”, a late Renaissance Italian garden scattered with huge, grotesque statues. These depict whales, bears, dragons, mythological figures, a man-eating elephant, disconnected body parts, and more. The perverse statuary is marred by cryptic irruptions of poetry. “And all other marvels prized before by the world yield to the Sacred Wood that resembles only itself and nothing else.”

The sculptor (credited as Simone Moschino) did with stone what Hieronymous Bosch did with paint, but while Bosch was motivated by faith, Sacro Bosco’s inspiration was more earthly (and sad). The park was commissioned by condottiero Pier Francesco Orsini in an act of mourning for his deceased wife Giulia Farnese, and while the precise meaning of the deranged strew of statues is lost to time; they are probably either manifestations of grief or expressions of hope: that are bigger and weirder things than man and his pathetic threescore-and-ten life, and death is not final. It’s notable that many of the monuments (Orcus, Cerberus, and Persephone) relate to underworld and the afterlife.

It’s not classical music. The pieces are structured pretty simply and rely on force more than intricacy. There are suggestions of Godspeed You! Black Emperor, Sigur Ros, Vangelis, SUNN O))), Berlin-era Bowie instrumentals and so on. Even when classical music is hinted at, it’s closer to Phillip Glass than, say, Bach.

And then there are moments that hint at nothing, where the music sounds like nothing you’ve heard before. Von Hausswolff allows you to climb a ladder of familiarity and then kicks the ladder away. Soundscapes pulse like the heaving flank of an alien beast, the air streaming from Hausswolff’s pipes like bubbles from the gills of a fish. In reality, alien things are everywhere. Gardens are fantastical, and Sacro Bosco’s monuments are largely drawn from real, living creatures.

“Theater of Nature” begins with ripples fluttering across a tonal sea, before progressing into a sequence of four-and-five note ostinatos, puncturing the background drone in huge knife-thrusts of sound. The song is stumbles along in a 5/4 meter, capturing the feeling of the park: man’s purpose knocked astray by nature. We pave a courtyard, but plants grow through the cracks. A man marries a woman, but she dies. There are piercing treble notes that sound like synthesisers. They glide high across the rest of the sound, hints of a heaven you hope exists but cannot reach.

“Dolore di Orsini” is a keening lament from Pier Francesco ‘Vicino’ Orsini to his lost love. Very simple and pared back. All Thoughts Fly breaks things down and builds them up again, again and again, as if letting you catch your breath.

“Sacro Bosco” is one of the higher builds: big, ugly, dark, and challenging. Black gasps of air swirl out like a the breath of a steam engine. But soon the mechanical rhythm is overwhelmed by an ecstatic wall of sound; nature is falling down, falling in, eating up man and his works. It’s pretty violent, and violently pretty.

“Persephone” takes us back to minimalistic sadness. A nearly empty box, with a little lost melody wandering inside it.

“Entering” sounds like a compost of all the proceeding pieces: gathering up “Sacro Bosco”‘s noise and “Dolore di Orsini’s” melancholy and “Persefone’s” melodicism and even a reprise of the “Theater of Nature” theme, along with some beater-box percussion. The track is two minutes long and comes in and out like a wave, as if clearing the ground for the next track.

The twelve-minute “All Thoughts Fly” is high-vaulted and airy, like a cathedral. Hausswolff constructs clouds inside the space, and dashes them to raindrops. The oscillating arpeggios produce a mild hypnotic effect. This is the longest track, and the most Glassian – it was like listening to an outtake from Koyaanisqatsi at times.

The song (and album) title come from the most famous part of Sacro Bosco, the vast mouth of Orcus, the Roman god of the underworld. He was largely worshipped in rural provinces, which allowed him to survive for a time after Rome’s urban dieties fell before Christianity (it’s fitting that his most famous monument is surrounded by plants). The garden is private thoughts and feelings projected into the crudest biggest form imaginable, and the acoustics inside Orcus’s mouth mean that whispers inside are clearly heard by those outside. Hence the inscription on Orcus’s upper lip, “All Thoughts Fly”.

Sacro Bosco’s patron would have agreed that there’s beauty in largeness, and in music there’s nothing larger (or louder) than a pipe organ. They’re bestial. The biggest ones barely seem like instruments: they’re more like engineering feats akin to suspension bridges. The Boardwalk Hall Auditorium Organ in Atlantic City, New Jersey has eighteen meter long pipes weighing over a ton each, cold-rolled on machines normally used to make battleships. These immense pipes play notes so deep that they don’t even sound like notes, they’re like jackhammers or helicopters. The first time an organist hit the lowest register C, a shower of tiles fell from the roof.

They’re the most quintessentially masculine instrument, so maybe it takes a woman to wring texture and sensitivity out of them, as Von Hausswolff does on the haunting coda “Outside the Gate (for Bruna)”, which might be the album highlight.

Von Hausswolff could be described as a heavy metal musician who doesn’t play heavy metal. Indeed, her career has been marked by absurd moral panics that actual heavy metal seldom inspires anymore. In 2013, leftist groups attempted to deplatform her as a “fascist sympathizer” for the crime of wearing a Burzum shirt, and in 2021, she attracted protests and boycotts in France because of a hilariously tame reference to the Devil in her lyrics.

Her fash-symp Satanism sounds better with each new release. 2010’s Singing from the Grave, doesn’t stand out as exceptional. 2013’s Ceremony was massive and grand, though some of the “Pitchfork metal”* moments irked me. I like most of what I’ve heard from her next few releases, but here she’s delivered something truly complete and remarkable. All Thoughts Fly fills the the universe, and hints at luminous things beyond it.

(*What do I mean by “Pitchfork metal”? It’s a particular style that’s hard to describe, but bear with me. Imagine a Pitchfork writer with VERY thick framed glasses. No, thicker than that. You’re still not imagining how thick his frames are. Imagine someone with his head fully encased by a gigantic block of cellulose like an insect trapped in amber.  But he has a tiny hole drilled into his immense frames, and a wire descending down to his ear. The music he’s listening to is Pitchfork metal.)