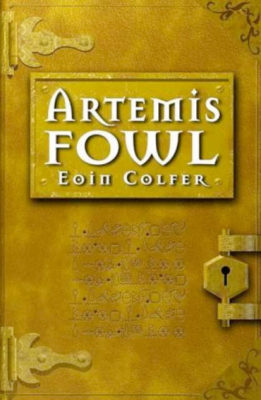 This book arrived bedecked in heraldry as The Next Harry Potter (every children’s book released 2000-2005 was officially The Next Harry Potter, just as every modern David Bowie album was “his best since Scary Monsters”). It doesn’t live up to that, and doesn’t want to: it’s something else entirely. It hardly feels like a book for children. The action is fast and kinetic, the writing is as taut as the wire-work in a Hong Kong action film, and the concept is pretty clever: a mixture of Lord Dunsany fairytales and Die Hard.

The plot sounds outright stupid in summary: like it was created by a desperate screenwriter in the 8th season of a show. “There’s a twelve year old supergenius called Artemis Fowl, and he’s also a criminal mastermind, and has a scary bodyguard who kicks ass like Bruce Lee, and he discover fairies exist…wait, don’t go! They’re high-tech fairies! They have gadgets and guns! He kidnaps one and holds it for ransom, but then the fairies stop time, and…yes, I DID past the office drug test. Stop asking!”

But the book is better than its synopsis, too. There’s storytelling ideas at work here that I haven’t ever seen attempted before or since (even in the book’s own sequels). Want another book like Artemis Fowl? Go to your local bookstore, find the fiction section, look up “Colfer” under the Cs, and purchase Artemis Fowl again. Now you’ve got two copies, and that’s the best you’re going to do. Sorry.

The plot is essentially a kidnap and ransom story, but Colfer’s masterstroke is in the details: particularly centering the story on its villain. Later books would turn Artemis into a good guy: they soon devolved into repetitive, uninteresting capers where Artemis and his fairy pals go gallivanting off to bust the Villain of the Week, and I got bored of them. In the first book, Artemis is genuinely sinister and unpleasant, and a great character. Hell for the company.

Here (as in many places), the book takes cues from Die Hard: that movie developed its villain to the point where he stole the show – you wanted to find out exactly how Hans Gruber would pull off this ridiculous heist, with all the odds stacked against him.

Colfer kicks it up a notch by pitting twelve year old Artemis against a supernatural police force who can do anything from make themselves invisible to removing memories. Of course, the fairy police are as bumbling and bureaucratic as Die Hard’s LAPD, sometimes almost comically incompetent. And they are bound by magical rules – if they enter a dwelling uninvited, the instantly lose their magical powers. And when you’re a guest in someone else’s house, you have to obey the host’s commands. This makes life interesting when the host decides you can’t leave.

The book becomes a fascinating conflict between an almost omniscient race of fairies…and a really smart, really evil kid. That adds to the rising drama: it’s genuinely unclear who will win at the end, and again we see the necessity of Artemis being a bad guy. Nobody would write a children’s book where the hero loses. But a villain…?

Artemis Fowl has flaws (some of which would metastazise like a cancer and kill the later books in the series), and often succeeds more on shock and awe tactics than amazing writing. Tip: read it very fast. That way you won’t have time to think about the finer details.

Details such as how the fairy cops are called the Lower Elements Police Recon, or LEPrecon (leprechaun!). That gets a laugh, but why do fairies use English words, when they’re explicitly described as having their own language? And how did “leprechaun” (a word dating back to the 17th century), come from “recon” (a military abbreviation of “reconaissance” that apparently dates back to the 1940s, if Ngram viewer is correct)?

Artemis apparently possesses magical powers of his own, such as when he uses a household magnet to unscrew a screw (magnetic torque can’t operate on a uniform substance such as a metal screw). This is also one of those books where a character translates a text in an ancient language, and it comes out in perfect rhyming English couplets. Sometimes Colfer just loses track of his own rules. A “bio bomb” is described, which explodes and turns living tissue into “a cloud of radioactive molecules”…but a group of characters journey into the fallout zone of one expecting to find bodies.

The Artemis Fowl books never gained the mass fame of the Harry Potter series. In my opinion, they’re collectively not as good. Harry Potter had an arc that continued from book to book, but Artemis Fowl didn’t even feel like it needed a sequel. The premise was fully explored, and afterwards there was nowhere left to go. The kid-friendly trappings held it back a bit: it feels like a story for grown-ups at its core, and it would have been improved by a bit more of an edge. Marketed wrong, promoted wrong, and developed wrongly by its own author, in isolation Artemis Fowl is an extremely good piece of work.