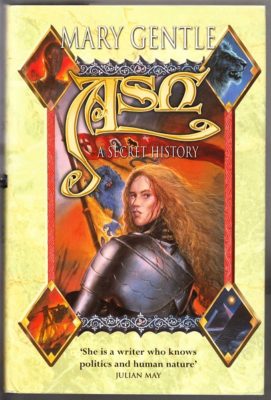 I heard the band Motorhead described as a perfect mix of 1/3 punk rock, 1/3 heavy metal, and 1/3 rock and roll, with no element outweighing the other.

This book is a mix of 1/3 fantasy, 1/3 alternate history, and 1/3 science fiction. It hooked me at age 12 because of its violence: if you want detailed descriptions of billhooks crushing skulls, this has them. Descriptions, I mean. But Ash: A Secret History is ambitious: the plot unfolds like Lemarchand’s box, becoming increasingly complex and intriguing.

It’s a book within a book within a book. The framing device is that a 20th century linguist is attempting to publish a biography of the female medieval mercenary captain, Ash, who lived in the 14th century and who is shrouded by myth and legend. She had a reputation for tactical brilliance. She also heard voices in her head, telling her the future. Or so the tales say.

The book soon starts getting weird. There are big hints that the world of Ash (and the biographer) is not our own. Christ wasn’t crucified on a cross, he was hung from a tree. The Visigoths didn’t disappear from history in the 8th century, they rebuilt the city of Carthage and established an empire on the northern coast of Africa. Certain world events went differently.

By the time quantum physics start getting involved the book, you’re heavily invested in its tale of bloodshed and war. Ash ends up defending 14th century Burgundy against an army of invading Visigoths – a bizarre war that’s found nowhere in history. Is it all a hoax? Are we are hoax? Are the true hoaxes the friends we made along the way?

The way the plot resolves is clever, but at every level the book is interesting: you feel sorry for the historian who wrote down Ash’s adventures and paid a terrible price for it, and for the modern-day linguist who keeps having the rug yanked out from under his feet by inconvenient historical discoveries (one wonders if Gentle isn’t writing about her own experiences in academia).

It’s not flawless – a lot of dialog scenes serve no purpose except to gargle and masticate information the reader already knows, and every conversation seems to run about thirty percent too long. But on the whole, it’s a superior work, unlike any story I can recall reading.

As I’ve alluded, Gentle is a heavily-credentialed midlist author with degrees in Seventeenth Century Studies and War Studies. She seems to be one of those writers who turns converts masters degrees into novels. Ash can a brutal book, revelling in blood, sordidness, and bathroom activities, and the fact that it’s also thoroughly researched and informative offsets this. Like George MacDonald Fraser before her, Gentle realises that the audience will tolerate a lot of depravity if you present it as an educational experience.