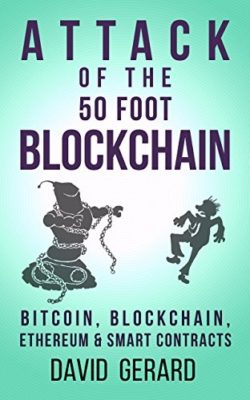 An investor once gave advice to a man invested in a speculative bubble. “Enjoy the party, but dance near the door.” If you own bitcoin, litecoin, or ethereum, Attack of the 50 Foot Blockchain will make you want to dance near the fire escape. Author David Gerard argues (successfully, I think) against virtually every technology derived from blockchains.

His view can be summarised as “blockchains fail at solving nonexistent problems.” They are speculative and sexy, making them flypaper for con artists, but that’s not the point – even good-faith implementations don’t work.

No major company utilises blockchain-based technology at scale. Ten years after the Satoshi Nakamoto paper, and after five years of loud media hype, cryptocurrency has few visible uses except as an asset (and perhaps it’s already time to remove “except as an asset” from that sentence). In light of this, dramatic fiascoes like the Mt Gox collapse seem more like irrelevant sideshows, distracting from the pervasive pointlessness of the technology. The problem isn’t “suppose your money is stolen.” It’s “suppose it isn’t. Then what?”

The book covers fifteen years of cryptocurrency, from the cypherpunks to the Satoshi whitepaper to the rapidly deflating bubble. It mixes tales of hilarious Wolf of Wall Street-style misadventures with serious analysis of the mathematical and economic weaknesses of blockchains. Bitcoin was supposed to be decentralised. In practice, it is chokepointed by a handful of big exchanges, subjecting their users to increasingly onerous KYC requirements. Bitcoin was supposed to limited to 21 million coins. In practice, any keyboard equipped with Ctrl, C, and V keys can fork the coin, defeating the purpose. Bitcoin’s tamper-proof ledger is frequently cited as a strength, but there are times when you want to tamper with the ledger. Transactions might be made by mistake, for example. The difficulty and risk of bitcoin has all but deep-sixed its small economy of legitimate users, leaving a small number of defiant “HODLers”, convinced that wide adoption is around the corner and things will be better tomorrow.

Gerard also discusses blockchain-based “smart contracts”. Again, they’re hip, and happening, but don’t appear to actually solve any problems with real world contracts, which have always been interpretation (what does “anticipatory breach” mean?) and enforcement (how do you punish anticipatory breach if it happens)?

A famous example: Robin Williams voiced the Genie in Disney’s Aladdin, he stipulated that the genie’s likeness not take up more than 25% of the space on any poster associated with the film (he didn’t want to be typecast as a cartoon character). Disney famously screwed him by making the Genie take up 25% of the space…and making the other characters significantly smaller. Williams joked that they drew Mickey Mouse with three fingers so he couldn’t pick up a cheque. How would putting his contract on a blockchain have helped Robin Williams?

These case studies, and many more, give the impression that blockchains aren’t a viable asset so much as a melon dropping towards the pavement. The book is comprehensive, and well written. Certainly out of date date by now, but that’s hard to avoid – in fast-moving fields, a book can easily be out of date before it reaches publication.

The most interesting parts (which could have been elaborated on more) were the mental psychographies of bitcoin’s users. Cryptocurrencies are a selection filter for unusual brains. The concept is futuristic. The very name sounds Gibsonian. They massage your preconceptions and ideologies: you’re John Galt, Johnny Mnemonic, and . Sadly, they’re also attractive to scammers: the concept is complicated enough that you can bamboozle laypeople, but not so complicated that you can’t fake the jargon with a little practice.

I’ve seen bitcoin evangelists in action. They’re like robots. They probably aspire to be robots – robots that don’t need to eat or sleep or do anything except refresh market depth charts twenty four hours a day. Their arguing styles are almost thrilling in their casuistry and dishonesty. “Blockchains might be used for x” is equated to “blockchains are used for x”, which in turn is equated to “blockchains are the best solution for x”. Sometimes they bust out tu quoque arguments. “Fiat money is imaginary, too!” I don’t follow the logic. All money is worthless…so buy bitcoin?

But they’re making money. Or at least, they used to, and they’re convinced they will again, if they weather the storm of negativity and FUD stirred up by the enemies of freedom. In short, they’ve fallen prey to self deception. “I have invested in bitcoin. This can’t possibly be a bad decision, because this would mean I am stupid. And I’m not stupid, so investing in bitcoin was smart.” I think many of them will look back after the crash and wish they could erase every single post and Tweet they ever typed about bitcoin. But that day is not today.

When the Hindenburg fell, it fell hard, billowing fire across many acres. By then, its failure was obvious, but for the people on board this knowledge came too late to save them. Why not get ahead of the curve? Why not stay clear of the Hindenburg altogether? Attack of the 50 Foot Blockchain has all the information you need not to throw your money into the blockchain bubble, or at least to be very cautious if you do.