Babylon Zoo – The Boy with the X-Ray Eyes 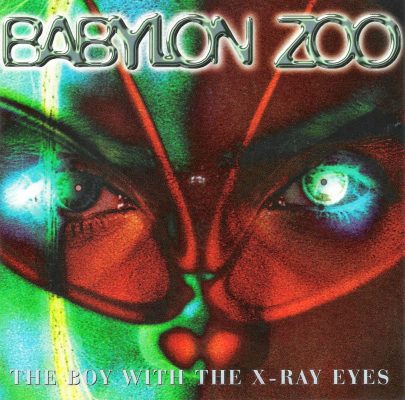 Nobody wants their entertainment to surprise them. Musicians that change genre usually kill their careers (unless it’s a very slow, stage-managed, and natural shift between two adjacent styles). On Goodreads, it is a criminal offense for a book to differ in any way to what the reader expects, punishable by 1 star and gifs of Robert Downey Junior rolling his eyes. “Ugh, the cover made this look like queer neurodiverse BIPOC dystopian YA, but it’s actually aro/ace instead. Do better.” The world is full of thumbsuckers who want to be comforted with the familiar. The idea that art might sometimes confound or surprise is foreign to most of them.

Even “countercultural” art is confined by audience expectation: noncomformists that all dress the same, striking rebellious poses inside tiny prison cells. Marilyn Manson is often classified as “shock rock”. He has released ten albums and counting of distorted guitars, industrial samples, and Middle America baiting lyrics, and I just can’t wait to see how he shocks his fans next.

Babylon Zoo is a cautionary tale of what happens when a band genuinely defies expectations. It isn’t pretty.

They were a rock band from Wolverhampton, fronted by Jas Mann, who had just left his previous project, the Sandkings. Their style was a modern fusion of 70s glam rock (Mann’s wavering snarl is an attempt at Marc Bolan) with 90s grunge. A brilliant idea. So brilliant that Smashing Pumpkins had already gotten there first, along with many other bands.

Nevertheless, they scored a lucky break in 1995 – Levi used their song “Spaceman” for a TV commercial. The concept was fun in the way that British ad spots often were: an alien girl (played by Kristina Semenovskaya) returns from a trip to Earth, and shocks her conservative alien parents with the ultimate fashion statement – a pair of Levi jeans.

The ad got Babylon Zoo’s music in front of millions of people…except it didn’t. The ad didn’t use the album version of “Spaceman”, it used an Arthur Baker remix that sped up the track, muted the guitars, and pitchshifted Mann’s vocals upward into an ethereal whisper of ice. It was a bright, futuristic sound, congruent with the ad campaign.

However, it sounded nothing like the actual song. The thousands of clubbers and ravers that bought the “Spaceman” single soon discovered that Babylon Zoo played turgid grunge rock, impossible to dance to. The Boy With the X-Ray Eyes held more of the same. Much more.

Once the summer of 1996 was over, so was Babylon Zoo. The couldn’t follow up “Spaceman”, and subsequent singles landed increasingly far from the top, as though fired by a marksman who drinks a double vodka soda between shots. Their second album album King Kong Groover (first single: “All The Money’s Gone”) sold just 10,000 copies, and then they were dropped from EMI.

Jas Mann was the first British-Asian to top the charts (2nd, if we count Farrokh Bulsara), and most of the publicity focused on him. It must be said that he handled his sudden fame sub-optimally, bigging himself up in the UK press (“I was expecting this success […] A racing driver knows when he’s got the best car – and I know I’ve done something that’s far superior to most things out there. […] I’m a great songwriter and I could become a musical genius.”[1]https://www.thefreelibrary.com/Spaceman+band+falls+back+to+earth.-a060199381), and making a Brass Eye appearance where Chris Morris ran circles around him and baited him into saying silly things.

Bowie always had a tight command over his public image – adopting disposable personas, then killing them when they threatened to consume him. Mann just came off as a callow youngster, trying to blast off into space with matchstick heads and a bottle rocket.

Babylon Zoo quietly ended, and Mann left the public eye, moving to an ashram in India. He now works in film. His main creative work these days might be this IMDB bio, which contains possibly the most lie-filled paragraph written in the English language.

“In 1996 Jas developed a visual/music project “Babylon Zoo”, writing and selling the concept to “Levis” as a visual and music advert broadcasted in over 30 countries. The first Babylon Zoo Album “Boy with the X-ray eyes” would go on to sell 5 million copies and achieving 21 number one hit records worldwide at the time entering the Guinness book of records as the fastest selling record of all-time

All false. The band formed in 1992. “Spaceman” was released as a promo CD by Warner Bros in early 1995, and then as a single on CD/vinyl/cassette by EMI. The Levi’s commercial happened afterward. It’s improbable that Mann (a 24 year old from Wolverhampton) had any creative control over the ad.

Five million copies sold in the UK? No. In 1996 the BPI certified the album gold, which meant it shipped (not sold) 400,000 copies in Britain. Perhaps it sold five million worldwide? Still no. Let’s assume for argument’s sake that the figure now stands at 599,000 (just under the 600,000, the level required for a BPI platinum cert). Are you telling me that Babylon Zoo, a UK band famous for a UK TV commercial, only moved (at most) 11.98% of their total units in the UK? Not a chance. This album shifted a million copies worldwide, max.

Revisionism aside,  The Boy With the X-Ray Eyes was definitely a victim of success. The gap between what it seemed to be and what it was proved too big to bridge, and the chasm swallowed the album, the band, and its creator alike.

But what if you listen to it on its own, and ignore the hype?

It has strengths and weaknesses. The production is raw enough to bleed. The entire album sounds like it was barely mixed – the drums are boxy and fake, the guitars are just a harsh SKRONK that’s somehow thin and overpowering at once. Jas Mann’s vocals are a tough sell, a weak and untrained sneer without any real tone. There’s precedent for this kind of through-the-nose singing in grunge (it’s not like Billy Corgan is vocalist of the year), but the album sounds like he tracked it while suffering from a head cold.

Around half the songs are uninspired or bad. “Animal Army” is dreck, a riffless, hookless alt rock song that sounds like a Dynamite Hack 45RPM played at 33RPM instead. “Confused Art”? I’m not confused at all, the song sucks. “Zodiac Sign” is distinguished only by its irritating chorus. “I’m Cracking Up I Need A Pill”? I’m Cracking Up I Need A Skip Button.

And that leaves a number of songs that are actually listenable, or well thought out. “Fire Guided Light” is a clear stand-out track, with moody verses and an explosive chorus. “The Boy With X-Ray Eyes” has quite a bit of dynamic contrast and some densely layered instrumental, including Indian santoors and sitars. “Is Your Soul For Sale?” has a cringeworthy intro that exposes how weak Mann’s voice is (“…we dahhnced the nahhht awayyy”) but it ends up being quite good.

The story of Babylon Zoo is not that of a band (or “visual/music project”, in Mann’s own words) that was a complete waste. It only adds tragedy to the comedy, but there was actually something here.

(NB: “N-rays (or N rays) were a hypothesized form of radiation, described by French physicist Prosper-René Blondlot in 1903, and initially confirmed by others, but subsequently found to be illusory.”[2]https://en.wikipedia.org/wiki/N-ray)