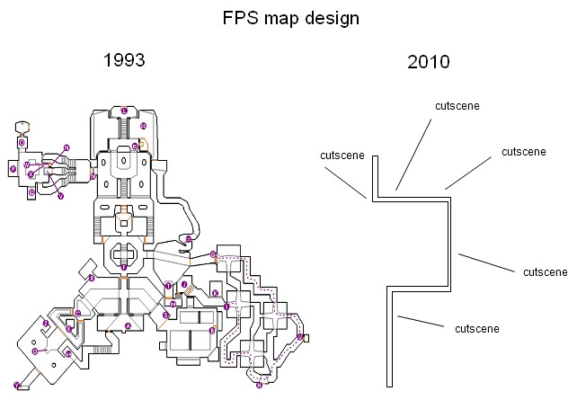 What’s the worst trend in gaming?

I don’t know. But the most inexplicable trend is the game that doesn’t want you to play it.

You are led by the nose down a path, having scripted experiences. Every choice has been made for you in advance. Stray from the path and you’re corralled back in by invisible walls or flashing “RETURN TO THE BATTLEFIELD” messages. Cutscenes are immensely long: you spend half the game with your inputs disabled.

…Doesn’t this defeat the whole purpose of a videogame? Being able to explore and interact and express agency? Games lose a lot when they’re reduced to booklike narratives where the player’s “actions” are just fancy ways of turning the page. 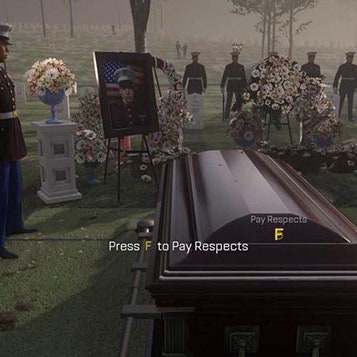 This is not a “games were better in my day!” rant. The worst offenders in this category are actually classic games, particularly the adventure games of the 80s and 90s.

Remember adventure games? Like The Secret of Monkey Island and Leisure Suit Larry? Remember how, around 1995-1996, everyone suddenly stopped playing them?

“The death of adventure games” was a popular journalistic brief in the late 90s. Writers filed many a column inch about why adventure titles weren’t selling, and why the old guard of developers (Sierra/LucasArts/Trilobyte) were either shifting focus or filing for bankruptcy.

Always, an outside factor is blamed for killing the genre. Adventure gamers love Lost Cause myths where their beautiful, pure genre were ruined by Myst and Doom and Nintendo and arcades. Nobody wants to admit that the rot started within.

Here’s the truth: most adventure games (aside from a short list of classics) were actually total shit, full of illogical puzzles, mazes, pixel hunts, fetch quests, and arbitrary deaths. Here’s the average puzzle in a text adventure:

That’s not a strawman. Half the games Infocom ever made were exactly like that.

Just because I love you, here’s a real example from Westwood’s critically-acclaimed The Legend of Kyrandia, which sold quarter of a million copies in 1996. 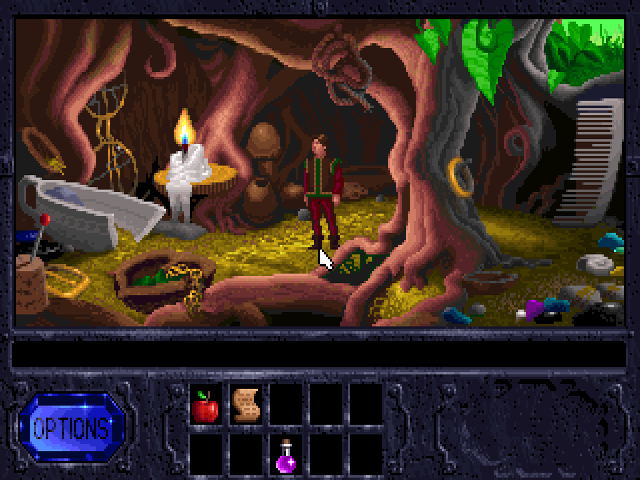 You are standing outside a house, looking down into a lake. You see a pair of eyes in the water. When you approach the water’s edge to get a better look, a huge monster rises from the water, snatches you with its tongue, and reels you into its mouth. Crunch.

Terrible. A whole Full Sail game design course could be taught about how utterly bad this puzzle is, in every conceivable way.

There’s no warning of danger, no possibility of escape, and the outcome for the player is death. There’s no skill involved: you just have to know not to follow the eyes. And since you can’t anticipate the next death trap (which there are a lot of), you end up creeping around Kyrandia like a scared mouse, hoping you don’t step on any Instant Death Pixels(tm).

The Legend of Kyrandia actively penalizes you for playing it. Exploring? Taking risks? That’s not in the plan. Stick to the main path, friendo, and do what the game wants you to do.

This design approach is great from the developer’s point of view. You spend less time designing art assets and playtesting puzzles. Your games ship sooner, and have fewer bugs. Open-world games with a lot of options quickly turn into a garden of forking paths. But in the long run, you get a constrained experience.

It’s interesting that the big genre shifts of the past few years have included open-world exploration games like Minecraft, and battle royales like Fortnite and Apex Legends. These are games where every experience is different. It’s not a surprise, in hindsight. Players, by definition, want to play. They don’t want to be conscripted characters in someone else’s story, and that’s exactly what many major games are.

I’ve long felt that the “are videogames art?” debate elides the obvious point that the “art” of videogames is usually just cinema, at best. Playing a Triple-A game is largely indistinguishable from watching a movie. The strongest claim games can make to being an art form are titles like Cosmology of Kyoto and Rez…