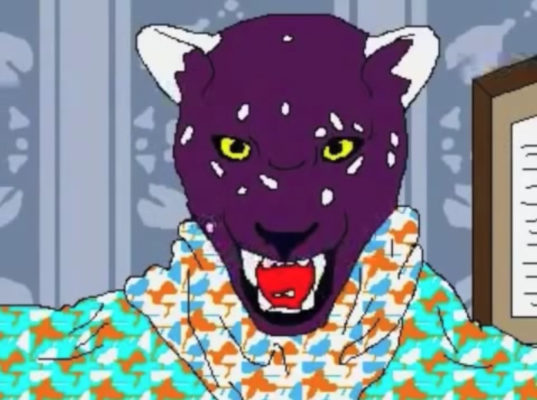 …is an episode of The Simpsons, but also an odd video.

Few have seen it. Those who have might actually understand it less than those who haven’t. Watch it and you’ll see what I mean. It’s a comprehension black hole.

Here’s the thing about the weird internet: words don’t work. The more I describe something the more confusing they become. Light doesn’t illuminate their darkness, it deepens it. Chernobyl has special radiotrophic funguses that resist radiation; the internet has special funguses that resist explanation. There’s stuff that just seems broken, barely existing in reality, and well-meaning “explainers” all seem like mathematical treatises on four-sided triangles.

Goatse.cx is a good example. Although I can tell you what it is – a long-gone website which hosted a photo called hello.jpg, showing a man stretching his anus to the width of a toilet’s outflow pipe – I can’t capture its essence.

I’d have to write reams about the surrounding culture, how it became an easy-bake recipe for trolling and griefing, how some scrub would ask for CS hacks on IRC and you’d link him to goatse.cx and laugh while imagining his face, how it then became the flashpoint for various internet dramas (the scrabble to secure the goatse.cx domain name after the Christmas Island authorities intervened, the search to identify “the goatse dude”, etc), and eventually became a shibboleth for the weird web: something you either “get” or don’t.

For many of us, goatse was a shock, a loss of virginity, the moment the safety rails fell away and we realized just how terrifying the internet was. It’s a humbling reminder that no matter how weird you think you are, you’re probably pretty normal in the grand scheme of things. But I don’t think I’m making much progress at explaining goatse. In the end, it just exists: this awful, inexplicable thing that everyone knows about but nobody talks about, a cancer the internet is slowly dying from. A few days ago, the Toronto Sun put this on their Twitter feed, and everyone went “haha” without even acknowledging what it was. That’s the correct way to experience goatse. Wordlessly.

Bart the General is a similar case. It can’t be done justice. This Youtube comment by “Fudgaboutit” sums it up.

Have you ever been scared by something as a kid because you can’t comprehend what you’re seeing, but you know something is wrong? It is so strange to be feeling that again as an adult.

It’s a deliberately bad animated The Simpsons parody created in 2005 by a UK art collective known as Famicon (most particularly, someone called GHXYK2). Their other “work” is varied: books, music, videos, comics, and homebrew PC games. Bart the General was animated in Multimedia Fusion 2, with sprites apparently drawn in MS Paint. It shares a name and nothing else with the fifth episode of The Simpson’s first season, and I assume GHXYK2 titled it that way to trick people searching for the actual episode. When viewed in a blurry 320×240 thumbnail, Bart the General kinda looks like the Simpsons.

It begins with an ear-bleeding, distorted remix of Danny Elfman’s Simpsons theme. You’ll want to mute your audio. There’s a loudness war, and this is its A-Bomb. Hallucinatory imagery flashes on the screen. Animated gifs loop in corrupt circles, distorted by digital filters. It’s an uncomfortably long introduction, but what follows is beyond uncomfortable.

An Australian convict called Toadfish shows up on the Simpsons’ street. He throws Ned Flanders out of his house, gruesomely murders Scott and Todd, and then enters the Simpson home for reasons unclear. I should note that Homer is “Omarn”, and Bart is “Burton”, but GHXYK2 occasionally refers to these characters by their original names, and so will I. Lisa is mentioned several times but never seen, and Maggie doesn’t seem to exist.

Toadfish out-alphas Homer (“Oi’ll break yorr legs!”), and seduces Marge with his antipodian charm (“thought you were the daughta, ya so fit”). He moves in, and Homer is thrown out of the house and forced to live in a crackhouse with Ned, where he cries incessantly. Even his son Bart begins to persecute him.

This has an odd air of pathos – as though the creator is taking it half-seriously. You feel sad for Homer. Generally, tragedy takes a Shakespearian form (the hero’s downfall occurs because of their mistakes or personality flaws), and a Grecian form, where the downfall is unavoidable, the will of the gods. I’d call Bart the General a Grecian tragedy. Homer hasn’t done anything wrong. Stonefish has just walked off the street into his life and taken everything from him. It’s arbitrary fate, unearned and cruel. But this is merely the polar inversion of the regular Homer Simpson.

It’s often observed (even on the show itself) that Homer makes no sense. How could a man that stupid work as a nuclear safety technician? How could a man that selfish have a loving and loyal wife and family? In its own way, it’s as mind-breakingly wrong as anything in Bart the General. Homer doesn’t deserve to lose everything. But nor does he deserve to have everything. The symmetry is fearful.

The final thirty seconds are incredible. Homer stops bewailing his fate and returns back home. Maybe he thinks that it’s all a bad dream and life can still return to normal.

But as he enters the house, he sees Marge having sex with Toadfish on the iconic brown Simpsons couch, and suffers an emotional collapse. He groans “Marge…you’re breaking my heart!” in such hard-rending gravity that you might think it’s a reference to The Room (which it probably isn’t, that film achieved fame a year after Bart the General), before sitting down and scooting his ass back and forth on the carpet, moaning like a broken vacuum cleaner.

Toadfish, by the way, is a character from the Australian sitcom Neighbours. This meaningless yet oddly specific detail typifies Bart the General. Why is Toadie in the Simpsons? And why is he so different to the original character? Jarrod “Toadfish” Rebecchi was a class clown who was later recast as the show’s voice of wisdom, but he was never a brutal sociopath. It does explain some creative decisions, though. For example, this digitally defaced man is Neighbours actor Ryan Moloney atop a picture of tetractenos glaber, the Australian toadfish. 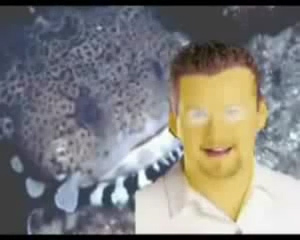 The original video has gone down, but re-uploads exist. Bart the General has a hydralike tenacity. It probably has more fans than the Simpsons episode it stole a name from, which was a tepid and safe effort from a show whose writers were still gaining confidence.

GHXYK2 made three more Bart the Generals. They didn’t recreate the success of the original, and didn’t try to. Instead, they took an already-weird story even further into a landscape of nightmare. 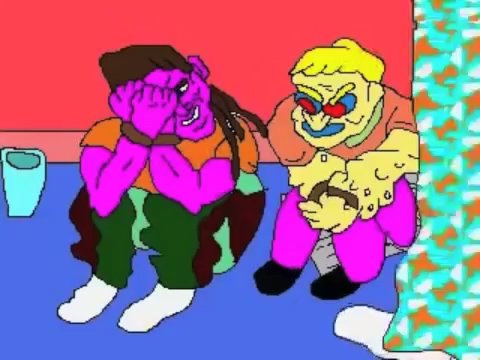 Bart’s voice completely changes. A few Simpsons characters appear (Mr Burns, Otto the busdriver), along with Dr Gregory House and still other characters I cannot identify. There are Lynchian touches – such as the entire fourth episode, which has a reddish tinge suggesting sundown, or a spiritual and perhaps actual apocalypse. Not even the length of the videos makes much sense. There are sophomoric gross-out touches, such as a plane with a shitting anus on one wing-tip.

Homer’s troubles only get worse. Toadfish’s brother Stonefish arrives at the house (“I’m fucking ruining your life from this day on!”), and joins in the bullying of Homer.

Stonefish doesn’t even look like his Neighbours character. He also possesses magical powers. One of Bart the General’s most gruesomely effectly visuals involves Stonefish electrocuting Homer and then literally pouring himself down a phone line (link because it’s possibly seizure inducing, and too annoying to have on the page).

All of it is fairly incidental. Plot threads just begin and end, usually unresolved. But you see the cracked remnants of TV plotting. The terrorists (who kill someone, leave, and are never seen again) are your classic villains-of-the-week, for example. And Stonefish is the “worse bad guy appears after hero defeats the first bad guy” season 2 plot device. The fact that it’s all wrong – Homer hasn’t even defeated the first bad guy, and Stonefish and Toadfish join forces! – make it all the funnier.

It seems different artists created different parts: as they vary a lot in style, quality, and tone. Will there be a Bart the General 5? Time will tell. The fourth installment ends with a big “TBC”. But the fact that it was made thirteen years ago (and nothing since) probably mean this was just trolling on GHXYK2’s part.

Bart the General received hundreds of thousands of views when originally uploaded, although not all of them were organic.

In 2006 Rich “Lowtax” Kyanka (of SomethingAwful fame) took the somewhat gay step of trying to turn it into an internet craze.

So I was wondering if the power of the SA Forums could be used to turn this seemingly unpopular, random video into a meme, into some viral Internet sensation which will immediately become played out and obnoxious. Here’s the general outline of how these things happen:

1) Video is linked ( http://www.youtube.com/watch?v=TezHbHnPXZw )
2) The link is passed around through blogs, emails, and IMs.
3) Photoshops and parodies of catchphrases from the video start popping up.
4) Video collections of the photoshops and parodies pop up.
5) News media outlets catch wind of it and talk about it in their “lighter side” part of the newscast, before “panda gives birth” and after “cute kittens play with yarn”
6) Merchandise cashing in on the original media starts coming out.
7) Everybody associated with the original media expresses their desire to kill themselves for ever being involved.

As he later put it:

“I was curious to see how difficult it would be to artificially manufacture a viral Internet fad. I didn’t really have any target until I saw this video: This is one of those things so completely random and messed up that, I figure, it’d be the LEAST likely to ever turn into a meme or successful viral Internet fad.”

But if you were doing that, you’d pick a video that’s actually boring.

Bart the General isn’t boring, not by half. Nor is it “completely random”. There’s obviously a degree of thought behind it, obviously a desire to entertain. The fact that it works different beats to most mainstream entertainment doesn’t make it meaningless:  9223372036854775808 seems random to the casual eye, while a computer scientist sees the values for a signed 64-bit integer. To those who “get it”, the video is extremely fascinating and rewatchable. Kyanka’s edict to spread this “unpopular, random video” is like a viral campaign to get people to look at porn. The video is great on its own terms, not because of some ironic gesture on Kyanka’s part.

Regardless, the SomethingAwful “goons” followed Kyanka’s instructions and obligingly spammed the video everywhere they could. You can see the remnants of their publicity blitz here, along with idiots ruining the gag by talking about FYAD and whatnot. It saddens me, and cheapens the video, I think. Just like when I see people on Youtube posting banal comments and upvoting each others’ feeble jokes (“still better than ‘Lisa Goes Gaga‘, am I right guys? Hurr hurr.”) It’s like watching chimps handle a Joseon porcelain vase. Bart the General is too good for them, and for Kyanka, and for me.

I’m fascinated by the reactions – or non-reactions – internet commenters have to Bart the General. Some return to it because they’re fascinated by it. A lot of them are burned out, 40 year old goons who remember Lowtax’s campaign.  But they all keep coming back to it. I am just glad to live in a world where it exists.