Beavis and Butthead Do America 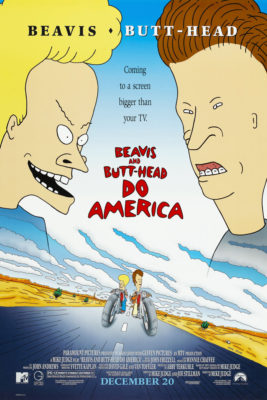 Beavis and Butthead wander around America, being so stupid that they’re almost immortal. The show itself works the same way. It’s one-dimensional to the point of being immune to criticism: everything is right there, on the surface, an inch from your face. There’s nothing to “unpack”. There’s no message, or subtext. Merely by reading the title, you’ve plumbed its deepest depths.

Read contemporary reviews and you’ll see flop-sweating critics trying to find nuance in a show that doesn’t appear to have any. What can you say about Beavis and Butthead? That it’s a show about two idiots? Is that it? Is there anything deeper going on at all?

Maybe. Let me attempt an explanation:

The show is an extreme parody of Generation X nihilism. The 80s became the 90s, the Berlin Wall fell, Nirvana’s Nevermind came out, and millions of young people collectively decided it was uncool to care. Your clothes? Flannel and torn jeans. Your career? Skateboarding, or playing guitar in a local band called Turdsplatt. Your death? Late twenties, overdosing on some fashionable drug (probably heroin.)

Generational contempt hit an all-time high. Parents in the 60s thought their kids were commies, parents in the 80s believed their kids were devil-worshippers, but at least those things require initiative. Now, kids just sat in front of the TV all day, growing dumber and less curious by the second, as the Ozone layer burned and bombs pounded Vukovar. For the first time, the youth weren’t scary, just embarrassing.

Yes, this stereotype was unfair. The most famous Gen X’er, Kurt Cobain, was industrious, introspective, and mentally ill, not an apathetic slacker. But the lack of fairness is sort of the point: Beavis and Butthead are caricatures from baby boomer imaginations, rendered in full ridiculousness. Mike Judge isn’t mocking teenagers, he’s mocking their parents. “Look at this. Is this really what you believe your kids are like?”

But what about the movie?

The story begins with Beavis and Butthead noticing that their TV has been stolen. After pronouncing weighty judgement on the situation (“this blows”), they set out on a journey to find a new one, road-tripping across America and snickering at every sign on the interstate (“heh heh…Weippe…”)

They’re soon wrapped up in a drama involving government agents, a deadly bioweapon, and the President. The specific details are unimportant, since Beavis and Butthead successfully misunderstand or ignore every single thing that happens to them (no mean feat, as one of them is an elbow-deep cavity search). There’s funny jokes, and even some pretty good animation (particularly a peyote-tripping scene created by Rob Zombie).

Roger Ebert enjoyed the film, but noted his difficulty in telling the two central characters apart. I can confirm that they are distinct: Butthead is taller, has dark hair, and is somewhat more intelligent. He wears an AC/DC shirt, which I always thought was a little off (Metallica is fine, but AC/DC was a band your dad listened to). Beavis is an anarchic force of chaos, barely held in check by an occasional “shut up, buttmunch” from his domineering friend.

B&BDA is 25 years old, and many of its cultural references seem dated. In another 25, it will need a Rosetta stone to be understood. It came out in 1996, and although it made money there wasn’t a sequel. The show was cancelled in 1997, and for years it existed in a weird dead zone: too old to be relevant, but not old enough for a nostalgia-fueled comeback. That happened in 2011, although the show will probably never command the level of attention it had before.

B&B don’t really work when you transplant them into modern times. In 2018, it’s old people who sit around watching TV all day, not kids.

But some parts of Beavis and Butthead haven’t aged, and some that did really shouldn’t have. When government agents try to track the duo down, they use a fax machine. Beavis and Butthead are stupid, but there are worse things. There is intelligence paired with malice. They should be glad that they weren’t living in 2018, smartphone addicted rather than TV addicted, with the NSA understanding them far better than they understand themselves.