Beavis and Butthead Do the Universe 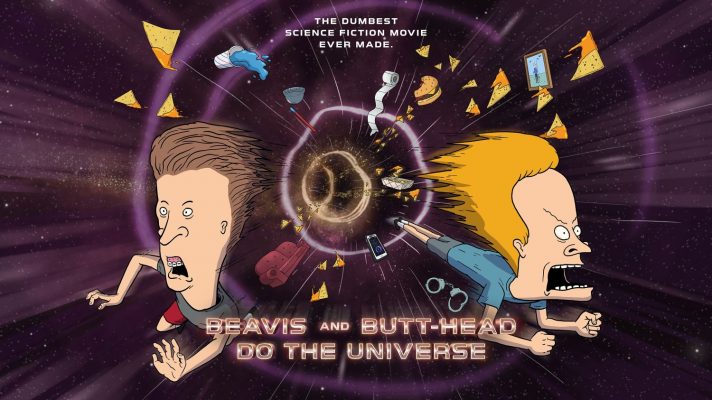 As a kid, I watched Beavis and Butthead with the understanding that they’d prove a fleeting pleasure. “Soon I’ll be too old for this crap and it won’t be funny anymore.”

I am now very, very old, and still waiting for that day to arrive.

Maybe Mike Judge is a genius, or maybe B&B is so simple that it’s impossible to screw up, but the formula continues to work after thirty years. Beavis and Butthead are still two idiots who stumble through life mouth-breathing and misunderstanding everything that happens to them, and that’s all they will need to be. If only life was so simple for the rest of us.

The plot involves Beavis andButthead literally failing upward. After trashing a science fair (“Did we win the science fair?” “Even better, Beavis. We kicked its ass.”), a judge orders them to attend space camp for at-risk youth. An astronaut sees them, believes they are naturally gifted astronauts (a recurring plotline of B&B is the adult who mistakes them for secret geniuses), and takes them into orbit to study a black hole approaching Earth.  In space, they create havoc, fall into the black hole, and emerge in the year 2022.

There’s the obligatory larger plot about government coverups and an incipient apocalypse, but the bulk of the comedy comes from them interacting with this new, strange world. Beavis thinks Siri is an actual woman and sexually harasses her. Later, the duo wander into a college class, are told that they have “white male privilege”, and start using that as carte blanch to do whatever they want. “Step aside please. We have white privilege.”

A 4channer once proposed a movie idea: a generic 90s bully time-travels to a modern high school full of furries and tenderqueers. B&BDTU is almost that movie. Aside from being funny this solves the main problem with the characters: they’re so indelibly a product of the 90s. What’s B&B’s main form of entertainment? To sit on a couch watching TV. Few kids do that anymore. They were further characterized by their love of heavy metal, which hasn’t been a mainstream force in a long time.

The Simpsons never knew how to upgrade its stock 90s setting into the modern age, but Mike Judge draws attention to the cultural gap. His duo is now more oblivious than ever.

There’s lots of bite in Judge’s comedy but no real cruelty. He isn’t mocking anyone except Beavis & Butthead, and even that’s not true mockery. The show was always a parody of boomer paranoia about Generation X (that they’re morally vacuous retards who just want to stare at bouncing boobs on MTV all day). To think Beavis & Butthead exists to ridicule Generation X is as misguided as thinking blaxsploitation exists to ridicule African Americans. And even if they’re figures of fun, so what? Beavis and Butthead are immune to mockery. That’s their power. Deplore their lack of morality, and they’d simply wheeze-laugh. “Heh heh…you said ‘oral’.”

And that brings me to an insight I had about Beavis and Butthead.

In the 17th century, a philosophical debate raged about the nature of mankind. Are humans endowed with an innate moral sense (Shaftesbury), or are we natural savages who must be disciplined by an external force such as civilization (Hobbes)?

In the 20th century, evolutionary theory offered a new answer: we’re both.

Imagine that humans come in two varieties: nice guy and bully. When a nice guy meets an bully, the bully wins. But if bullies become too common, nice guys gain an advantage (because bullies waste time picking pointless fights with each other while nice guys don’t). Over time, an equilibrium of nice guys to bullies is found (attach numbers to this simplistic model and you even calculate the exact ratio). The point is, you wouldn’t say that humans are naturally nice or naturally bully, you’d say that our species is split between two competing strategies. This is the insight of John Maynard Smith’s hawk/dove theory.

It occurs to me that Beavis and Butthead occupy one half of a hawk/dove strategy. The fact that they’re stupid and selfish isn’t a failing, it helps them. David Van Driessen is moral and empathetic, but this gets him exploited by Beavis & Butthead at every turn. Tom Anderson is conservative and proud to be an American, even after his country literally rapes him in the ass. Likewise, the social justice warriors have an elaborate set of shame-based social theories that Beavis & Butthead promptly weaponize against them without even knowing they’re doing so. It’s like intelligence and all its fruits (morality, empathy, time preference) is actually a harmful virus, and only Beavis & Butthead are immune.

I’m probably overthinking things myself. B&B is a fictional show. Whenever the idiots win, it’s because a writer made it so. But I still think B&B is pointing toward a real thing: intelligence is a virtue, but not a universal virtue. In a universe of rippling chaos, sometimes it’s the stupid who win.

Invest wisely and your portfolio will grow 9.89% YOY. Meanwhile, an 80 IQ truck driver just bought a lottery ticket and made a 133,333x return in five minutes. In the long term, intelligence wins out, but in the short term, the winners are usually stupid. And sometimes, the short term is all that matters.

Christopher Columbus’s voyage to the Indies was only somewhat less moronic than Beavis and Butthead going to space to get laid. But it led to the Columbian Exchange, the historical event of the millennium. Who knows, maybe the world really will be saved by a man with a T-shirt pulled up over his head, screeching about TP for his bunghole.