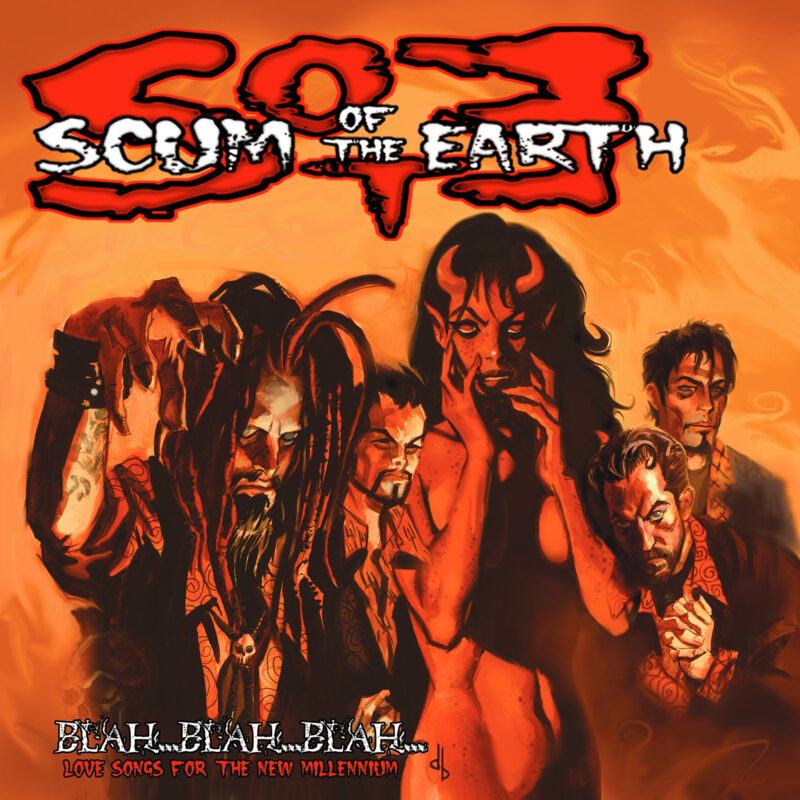 In 2004, Rob Zombie fired his guitarist. This guitarist – who had performed on the multi-platinum Hellbilly Deluxe and had clearly done a lot of the songwriting – immediately formed a new band, Scum of the Earth, along with White Zombie’s Ivan DePrume, and Powerman 5000’s Mike Tempesta.

This kind of “double band” thing is traditionally a way to settle scores and prove who mattered and who didn’t. Would Rob Zombie fail without Mike Riggs? Would Scum of the Earth become the new hotness? Would Bush be re-elected and, if so, would he succeed in “making the pie higher”? These were the questions we asked in 2004.

It deserved better. At least, it didn’t deserve to be totally forgotten. The album is fun. A little cheap sounding, but do you care if liquor comes in a cardboard box if your goal is to get wrecked on it?

Blah…Blah…Blah…Love Songs for the New Millennium demonstrates one thing: the Hellbilly Deluxe sound was indeed Riggs’. You hear it everywhere: the slamming, grooving riffing style, the electronic rhythms, the stop-start dynamics. This is unmistakably the brain (and picking hand) that created “Dragula”. Sometimes the songwriting is uncannily close, such as on album highlight “Murder Song”. When Blah…Blah…Blah… is good (and it is on about half its songs) it sounds far more like Rob Zombie than Rob Zombie’s post-Riggs music, which could be described as “70s nostalgia with about two heavy songs to make the fans happy”.

So what went wrong? Why did the album flop?

Well, larger-than-life shock rock needs a larger-than-life frontman, and Riggs had little charisma or showmanship. Back in the Ozzfest/Family Values days he seemed like a gruesome sideman to Rob, with a hollow acrylic Fernandez guitar that he could fill with blood or rotten meat. But once he had to front his own band he came across as a shy, reticient guy without much to say.

Riggs anti-promoted Blah…Blah…Blah… with truly incredible interviews, such as this one. What makes this project different from any of your previous musical endeavors? “I don’t know…Different people.” What does Rob Zombie think of the band? “I don’t know.” What will you be doing for Halloween this year? “Playing a show somewhere, can’t remember.” He promises to make a second album, and says that it will be “Hopefully, better than the first.”. In a genre where megalomania is virtually a job requirement, this man was hell-bent on discouraging you from listening to his music.

This indifference carries over to the album’s lyrics. Rob Zombie isn’t the greatest lyricist, but he can always be relied on for Burroughs-style lines that send your mind down interesting places. Riggs’ writing is seriously uninspired. Once he’s murdered some sluts and worshipped the devil a few times, he seems to run out of material.

And he cannot sing at all.

He doesn’t have a good voice. That’s the big problem here, particularly as the music is so vocally-driven. He seems to have known it, too: I recall him asking his label to allow him to work with a different singer. They refused, because of some stupid reason that I’ve forgotten and presumably only makes sense to record labels. He should have walked right then. It’s so obvious that this band needed a better singer.

He yelps, slurs, and barks, in a thin and high-sounding voice that’s about three notes deep. The various production tricks (like the way his vox track is slimed up with heavy chorusing) just draw attention to his vocal deficiencies like a blinking engine light.

It gets worse. “Little Spider” and “Give Up Your Ghost” feature acoustic guitars and clean singing. I am proud so say that I have never listened to either song all the way through and I never will.

The production is all over the place. Indie albums often have a fractured, piecemeal quality – they get recorded in various places, when dribbles of money become available – and that’s very apparent here. No two songs are mixed or recorded the same way. The kicks on “Murder Song” are are a healthy +6dB louder than the ones on “Get Your Dead On”. The guitars on “Nothing Girl” have a scooped out Tim Skold/KMFDM character (to the point where they might as well be synths), while “I Am the Scum” sounds like nu metal. The snare drum on “Pornstar Champion” is a digital sample, but the rest of the drums are live.

It’s a bit of a mess. And since Riggs lacks Rob’s major label Rolodex, he can’t paper over his weak spots with guests like Ozzy Osbourne and Tommy Lee and Iggy Pop. A random groupie sings on “Bloodsuckinfreakshow”, along with Riggs’ own son. Apparently the kid agreed to “perform” in exchange for two thousand dollars, terms which Riggs agreed to, on the condition that that the label had to pay him first. They apparently never did, so for all I know, Riggs’ son is still waiting for his two thousand dollars!

So the two big draws of Rob Zombie (the massive production and massive voice) aren’t here. What’s left is Riggs’ musicianship and guitar playing, which carries a lot of these songs. But by the time you get to nothing songs like “Nothing Girl”, you’re just listening to filler. This is a thirty-six minute album that actually runs for about fifteen. It could and perhaps should have been an EP.

I was a big Rob Zombie/Powerman 5000 fan at the time I discovered this – an early version of this site was called The Australian Nightmare, after Rob’s Howard Stern theme song. But this triggered a tyranny of small differences thing in me. There’s nothing worse than a thing you love done just a little bit wrong, and Blah…Blah…Blah… is a lot wrong.

Now that my obsession with Rob Zombie has faded, I can actually appreciate it. It’s forgotten and obscure, but it has its moments, and being dead is no hardship at all for a zombie.