Butchershop in the Sky by James Havoc 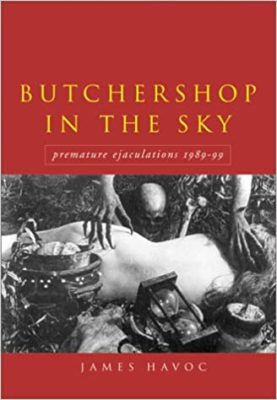 “Cult writer” is an obnoxious term: often the “cult” consists of one person (the writer himself) and sometimes even he doesn’t like his work. Nonexistent UK author “James Havoc” is a good example of one, though, in that he exerts strong appeal to a very niche audience.  95% of readers will be repulsed, offended, weirded out, bored, or otherwise unengaged by what’s on offer here, but the remaining 5%…

Butchershop in the Sky is a compilation of the Havoc’s astonishing writing, which consists of two novellas (Raism, White Skull), a short story collection (Satanskin), some unpublished material, and some unwritten (!) material that exists in synopsis form. There’s also a foreword from Creation founder James Williamson, describing how James Havoc went missing in Japan after an epic drinking binge, and is now feared to be dead. Although from what I hear, he’s crashing at Richard Bachman and Jesus Ignacio Aldapuerta’s apartment.

Straight off the blocks we get Raism, one of the least readable things ever published. It isn’t written in English, it’s written in “James”, an arcane pseudolanguage constructed by setting Ed Gein, an 18th century Jesuit monk, and the Marquis de Sade loose in a bar fight and writing down their shrieks. “Skin pins decant pyhorrhea from cumulus cunts, derisive quarsars blind supplicants; all lovers suffused with cancers by a petulant olive bruise.” The entire novella is written like that.

Satanskin is more restrained: a series of short vignettes that often contain actual plots. It’s hard to call anything in this collection mainstream, but stuff like “Shadow Sickness” wouldn’t have seemed too out of place in Clive Barker’s Books of Blood, for example. Havoc’s prose is extravagantly purple, and his imagination takes him to interesting places (“White Meat Fever” is about a man who steals vaginas from women and implants them on his body somehow). Tonight, we have no sense of crime.

White Skull is James’ last and best work: a rollicking pirate novel that destroys all in its path. Tales of the Black Freighter, innit, except there’s no pictures.

The rest of the book is a mishmash of a drunken writer’s bottom drawer. There’s two of Havoc’s stories adapted into comics – I didn’t like Mike Philbin’s art. “In and Out of Flesh” is about people literally trying to have sex with bolts of lightning, and manages to be disgusting and compelling. “Zipper Fox” is the tale of a lesbian biker gang, James Havoc guest featuring Russ Meyer if you prefer, and it exists only in outline form.

The most surreal moment comes in “Gingerworld”, an aborted attempt at writing a children’s book. The ginger king of a ginger kingdom has a series of bizarre confrontations with his nemesis, Hag Helly. In one story, Helly literally steals his face while he’s sleeping. Not to fear, though – his manservant is able to construct a replacement face from skin flakes from his bathtub.

As far as I can work out, “James Havoc” is not dead but is merely the pseudonym of publisher James Williamson. He’s found himself in a bit of trouble over these past few months (according to some Creation Books writers, his business model is to publish your book, not pay you royalties, and perhaps threaten you with violence) and if any of that’s true, I do feel guilty for financially supporting him. But what the hell. If you read Butchershop in the Sky, you should feel guilty anyway.