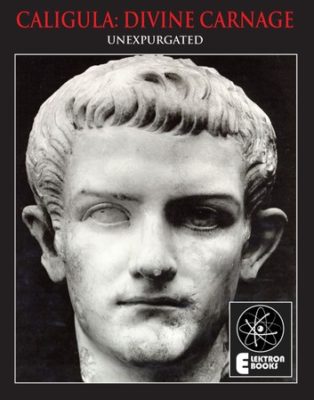 Did you buy this book expecting to learn about the Roman Empire? You’re in for a treat – there’s stuff in here that not even historians know.

For example, that Caligula’s sister died at age twenty three due to a “surfeit of buggery” with her brother and “seven outrageously well-endowed studs” (p34), and how when Caligula travelled he “amused himself by taking potshots at the dull-witted peasants in the roadside fields, wielding a sort of projectile-shooting bazooka” (p38), or how, in the arenas, skilled gladiators could decapitate a man and then direct the pumping jets of blood to spell “Caligula” on the sand, with the falling head forming the dot on the letter i. (p74).

But it wasn’t all fun and games. The most prized animal in the arenas was the “Libyan lion…eleven feet in length, with enormous paws armed with razorsharp (sic) claws of sabre-size dimensions, even their engorged testicles were as large as a man’s head”. Scary. The only way the Romans could subdue the Libyan lion and its engorged testicles was for a “particularly handsome slave to present his shapely, exposed anus to the lion’s mighty sexual apparatus; then, once the act of copulation (which invariably proved terminal for the unfortunate slave, due to unsustainable blood loss) reached its critical point and the lion was momentarily distracted, a gang of a hundred or more whooping slaves would wrestle the lion to the ground and throw a net over it”. (p83)

Divine Carnage is hilarious; one of the funniest books I’ve read in recent memory. I’m fighting (and losing) a battle just to fill this review with my favorite parts. Nearly every page of this book has entertainment value: which is good, because it’s a bit light on history. And literacy.

What’s this book supposed to be? A hoax? A work of surrealist metafiction? A parody of the “edgy history” trend? One of Creation Books’ typical scams?

Also, the book was written by time travellers: James Havoc’s foreword is copyrighted 1999, but it mentions the “recent” Russell Crowe movie Gladiator, which came out in 2000.

Much of Divine Carnage was clearly composed while drunk – you can see the author’s mind wander down an alley and start free-associating while staring at an empty glass. For example, we’re told about the Imperial “thumbs up for life, thumbs down for death” custom, with an aside that the emperor’s thumb was actually penetrating a slave’s rectum. (But then you wouldn’t be able to see in which direction it’s pointing…)

Never mind that, though. Who are the authors of this masterpiece?

Jeremy Reed is a “Jersey-born poet, novelist, biographer and literary critic”. Stephen Barber is a longtime Creation Books hack-for-hire who has written a dozen titles along the lines of “transformative future sex death semiotics in the films of Uwe Boll”. Neither is a historian, but they attack the project with gusto. Jeremy Reed heroically cites four books as “…an invaluable sources of reference (sic)”, though his final sentence is candid: “There is no definitive life of Heliogabalus, and I have attempted to resassemble (sic) aspects of his character most likely to resonate in the current times.” Stephen Barber cites no books at all, just the “newly-excavated” Butrinte Caligula, which must be newly excavated indeed, considering that Google offers no corroboration that it exists.

Divine Carnage is the first in the Blood History series that marked Creation Books’s twilight years as an actual publisher. The second book was Flesh Inferno by Simon Whitechapel, and the third was The Bloody Countess, which is a reprint of a 1960s title by surrealist poet Valentine Penrose (whether Creation Books obtained the necessary rights from Penrose’s estate is an open question). The fourth book, sadly, exists only in our imaginations.

It’s likely that Divine Carnage was meant as a continuation of Tinto Brass’s Caligula, which shares its extemporized take on history and lack of good taste (James Havoc mentions this film in the foreword). Surely there’s a kid somewhere who relied on Divine Carnage as research materials for his O-levels. Hopefully that kid did alright.

I’d be remiss not to quote my favorite line from the book, on p96. “Commodus was certainly the first post-modern Roman emperor”. When I read that, it made my entire day. Creation Books ripped off a lot of people, but they did not rip off me. Not here.