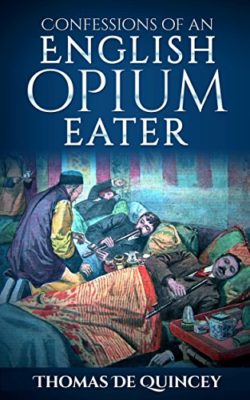 This 1821 book introduces one of the most famous and well-loved heroes in fiction. It stars in Junky by William Seward Burroughs, Trainspotting by Irving Welsh, Fear and Loathing in Las Vegas by Hunter S Thompson, and Requiem for a Dream by Hubert Selby, and countless others besides.

You’ll find the book’s hero in a green pod behind the amaranthine petals of a Papaver somniferum poppy plant. The resin inside the pod is called opium, and it contains the analgesic alkaloid known as morphine. When this alkaloid is ingested, injected, or snorted, it attaches itself to receptors in nerve cells, inhibiting neurotransmitter release, and giving you a pretty good weekend in Vegas.

“Among the remedies which has pleased the Almighty God to give to man to relieve his sufferings, none is so universal and so efficacious as opium” – Physician Thomas Sydenham (1624-89)

Opium (whether smoked or consumed in the liquid form of laudanum) was the cat’s pajamas in Romance-Era Britain. It was an effective painkiller in a world with a lot of pain. Additionally, it was fashionable: Romantic writers tended to view it as a gateway to a mystical oriental experience that only a cultured and wordly mind could appreciate.

But many opium users were clearly addicts. Confessions of an English Opium Eater is a rare bird: a Romantic account written by an ex-addict with the self awareness to know it.

It’s not packed with outrageous sin and depravity. Nor is full of incoherent drooling about the divine fractal oneness of the cosmos (etc etc). It’s a conventional narrative, and some of the most fascinating parts don’t involve drugs at all. You’ll learn a lot about how things were in England at the time, or at least I did.

The beginning section describes the author’s early life and matriculation, followed by his descent into poverty and homelessness that’s basically self-inflicted (he picks a fight with a bishop who he believes has insulted him, and loses his lodgings). He subsists at the margins of society, eating berries and earning money by writing love letters for illiterate young people. Apparently you could make a living doing that at one point.

De Quincey writes affectingly of the conditions affecting London’s lower classes, particularly orphans and prostitutes. A lot of the book could be viewed as proto-Dickensian. There’s a terrifying sense of atomization to this dark gaslit world that has no modern parallel – once De Quincey loses track of a person, he can usually never find them again. Friends just disappear, like they were never there. These people have no fixed address, no way of receiving mail, and sometimes not even a surname. But they’re loyal to each other – often De Quincey gets out of trouble with the police because a helpful urchin or streetwalker vouches on his behalf.

His fortunes improve at the intercession of some moneylending Jews, and while trying to establish a trade, he winds up on Oxford Street, buying opium to help the pain of a toothache (ironically, he becomes an addict perfectly legally, and only after he escapes the underground). He describes his first dose like this:

I took it—and in an hour—oh, heavens! what a revulsion! what an upheaving, from its lowest depths, of inner spirit! what an apocalypse of the world within me!  That my pains had vanished was now a trifle in my eyes: this negative effect was swallowed up in the immensity of those positive effects which had opened before me—in the abyss of divine enjoyment thus suddenly revealed.

“Abyss of divine enjoyment” is both paradoxical and religious in tone. But drugs are paradoxes, combining the holy and profane. They midwife beautiful literature, midwife insanity and necrotizing fasciitis. And the religious connotations aren’t strange: religious ecstasy and drug trips look very similar to the outsider, and perhaps the psychological effects are similar.

Across the Atlantic, the Civil War was brewing, where countless tons of opium would be used to treat battlefield injuries. It would be called “God’s Own Medicine”. Later doctors would refer to opium’s primary alkaloid as morphine, after Morpheus, Ovid’s God of sleep and dreams. The last and most devastating of opium’s children is heroin, derived from hero, who were traditionally men with divine ancestry. Drugs are debased spirituality inside a dirty needle.

De Quincey’s tail leads us on in familiar directions. Higher dosages. Higher thrills. He takes 1,000 drops of laudanum a day! He reads Kant, and actually understands him! There’s some great writing about his drug-created hallucinations. These have potential to drag, but they’re kept brief enough that they don’t. If the first section is proto-Dickens, the second is proto-Timothy Leary.

The waters now changed their character—from translucent lakes shining like mirrors they now became seas and oceans.  And now came a tremendous change, which, unfolding itself slowly like a scroll through many months, promised an abiding torment; and in fact it never left me until the winding up of my case.  Hitherto the human face had mixed often in my dreams, but not despotically nor with any special power of tormenting.  But now that which I have called the tyranny of the human face began to unfold itself.  Perhaps some part of my London life might be answerable for this.  Be that as it may, now it was that upon the rocking waters of the ocean the human face began to appear; the sea appeared paved with innumerable faces upturned to the heavens—faces imploring, wrathful, despairing, surged upwards by thousands, by myriads, by generations, by centuries: my agitation was infinite; my mind tossed and surged with the ocean.

De Quincey might have actually killed a man in this period. While on an opium trip, a Malaysian gentleman knocks upon his door. Neither of them can talk to each other, but as a show of brotherhood, De Quincey hands him a large slab of opium.

I was struck with some little consternation when I saw him suddenly raise his hand to his mouth, and, to use the schoolboy phrase, bolt the whole, divided into three pieces, at one mouthful. The quantity was enough to kill three dragoons and their horses, and I felt some alarm for the poor creature; but what could be done? I had given him the opium in compassion for his solitary life, on recollecting that if he had travelled on foot from London it must be nearly three weeks since he could have exchanged a thought with any human being. I could not think of violating the laws of hospitality by having him seized and drenched with an emetic, and thus frightening him into a notion that we were going to sacrifice him to some English idol. No: there was clearly no help for it. He took his leave, and for some days I felt anxious, but as I never heard of any Malay being found dead, I became convinced that he was used to opium; and that I must have done him the service I designed by giving him one night of respite from the pains of wandering.

Was the Malaysian man really “used to opium”? Or was this a self-serving fiction to ease a guilty conscience? Whatever happened to the Malaysian man, he returns to haunt De Quincey’s nightmares, along with a host of other spectres.

The inevitable part where he hits rock-bottom is dealt with only briefly. That’s my main issue: the tale feels lopsided and front-heavy, giving too much weight to his lodging disputes while neglecting the story’s main thrust of addiction. In a later edition, he expands his experiences, but apparently the earlier version is the better one. More words doesn’t always equal more meaning, as any reader of Stephen King can tell you.

So, an interesting read, and an educational one, but perhaps not always a truthful one. I’ve always wondered how much of a drug experience comes from the user, instead of the drug. Thanks to the placebo effect, drugs can be a self-fulfilling prophecy. Haven’t we all seen someone at a party drink one beer and suddenly start slurring his speech and groping girls’ asses? He’s not drunk. He just thinks he’s drunk. He’s granting himself permission to let go. The beer could have been tablewater – all it really did was act as an emotional go sign.

De Quincey didn’t know of the placebo effect, but he was aware that drug experiences are idiosyncratic toward the user.

If a man “whose talk is of oxen” should become an opium-eater, the probability is that (if he is not too dull to dream at all) he will dream about oxen; whereas, in the case before him, the reader will find that the Opium-eater boasteth himself to be a philosopher; and accordingly, that the phantasmagoria of his dreams (waking or sleeping, day-dreams or night-dreams) is suitable to one who in that character.

Roland Fisher famously described Aldous Huxley’s 1954 drug book The Doors of Perception as “99 percent Aldous Huxley and only one half gram mescaline”. The same might be true for De Quincey’s adventures, over a hundred years earlier. The fault, in the end, lies not in our doors, but in ourselves.

The God, uneasy ’till he slept again,
Resolv’d at once to rid himself of pain;
And, tho’ against his custom, call’d aloud,
Exciting Morpheus from the sleepy crowd:
Morpheus, of all his numerous train, express’d
The shape of man, and imitated best;
The walk, the words, the gesture could supply,
The habit mimick, and the mein bely;
Plays well, but all his action is confin’d,
Extending not beyond our human kind.
Another, birds, and beasts, and dragons apes,
And dreadful images, and monster shapes:
This demon, Icelos, in Heav’n’s high hall
The Gods have nam’d; but men Phobetor call.
A third is Phantasus, whose actions roul
On meaner thoughts, and things devoid of soul;
Earth, fruits, and flow’rs he represents in dreams,
And solid rocks unmov’d, and running streams.
These three to kings, and chiefs their scenes display,
The rest before th’ ignoble commons play.
Of these the chosen Morpheus is dispatch’d;
Which done, the lazy monarch, over-watch’d,
Down from his propping elbow drops his head,
Dissolv’d in sleep, and shrinks within his bed.
The Metamorphosis, Book the Eleventh 11:891 Ovid