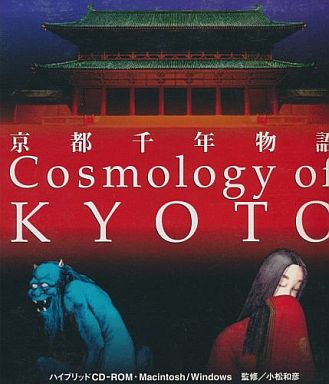 Released in 1993, it was sold as a game and is more accurately described as an interactive work of art. It’s moody, confusing, dark, and stylized. You could put it in a class with Dark Seed, Bad Mojo, and Haruhiko Shono’s collective work; games that aren’t remembered with much love but are still remembered.

How did it achieve rapid (if fleeting) fame? Via a technique I call “through the Mac-door”. By 1993, The Macintosh was losing favor as a platform for gaming. A dwindling market share and Apple’s apathy towards gaming had turned it into a dumping ground for “edutainment” dribble and ports of obsolete PC titles, and the occasional original Mac game (even if was a “””game””” wrapped in numerous air quotes) would make waves just because there wasn’t much to choose from.

Without fail, some marketing genius would notice the hype and wrongly conclude that the game was amazing and needed to be rushed to DOS, Windows 3.1, Windows 95, Amiga, and your kitchen toaster right goddamn now, usually with tragic results. If shitty games were AIDS, the Macintosh was a HIV infected needle in DOS’s perineum. But odd games entered the DOS ecosystem through the Mac, too. Games seemingly made in a fever dream or on drugs. This is one of them.

Cosmology of Kyoto takes you on a morbid journey through the Japanese middle ages. Heian-era Japan is now mostly associated with court writers like Murasaki Shikibu and Sei Shonagon, but Cosmology has little time for the courts: it’s focus is the streets and gutters, and the plight of the common folk. Supernatural monsters pose an omnipresent threat.

You create a character before you can play, choosing between “Single” or “Married” and between “Male” or “Female” (you can already tell we’re not in modern Japan because there’s no “Trap” or “Catgirl”). You can also change your facial features, although I didn’t have much luck in not making myself look like a dyspeptic Vladimir Putin. You’re also naked, but fear not: just like in real life you’ll soon find a rotting corpse whose clothes you can steal.

You wander the land, interacting with stuff using a classic “hotspot” based point-and-click interface. You talk to Buddhist monks, samurai, common folk, children, and demons. I died pretty fast: a pissed-off samurai cut off my head, and my soul went to hell.

Cosmology charts a third path: you can die, but if you play your cards right you can escape hell and be reincarnated back into the main game. Which you’ll want to, because hell’s pretty bad. The game’s art style has a strong ero-guro influence, with lots of graphic and grotesque imagery. Many Mac titles are for kids. This one isn’t.

I’ve seen people claim that the game has no point, or cannot be finished. Neither is true. You win Cosmology of Kyoto by discovering the source of the demon infestation (I think at the Imperial Palace), and gaining enough karma to break the cycle of death and rebirth. Kind acts like donating money to beggars increase your karma. Swordfighting and stealing decreases it. If you have too much negative karma, you’re reincarnated as a dog when you escape hell.

This emulation of Buddhist spirituality makes it comparable with western RPGs such as Ultima IV, although there’s also a dark, sinister “Tachikawa-ryu” aura of sex and death that’s classically Japanese, and completely missing from Richard Garriott’s famed series.

If esoteric spirituality isn’t your thing, there’s a wealth of historical depth to Cosmology. The game comes with a full encyclopedia of Japanese history and folklore, and the map is a near perfect recreation of Heian-kyo. I guess Cosmology is a kind of backdoor “edutainment” title, fulfilling the Macware stereotype. Maybe this is another reason for its surprising (if short lived) popularity: it’s a cultural experience. A tech support experience, too. As with many classic adventure games, the hardest puzzle in 2020 was getting it to install and run.

Is it worth playing? I don’t know. I think these sorts of weird-ass games are more fun to be aware of than to actually dive into. I don’t need to go to hell: knowing it exists is enough.