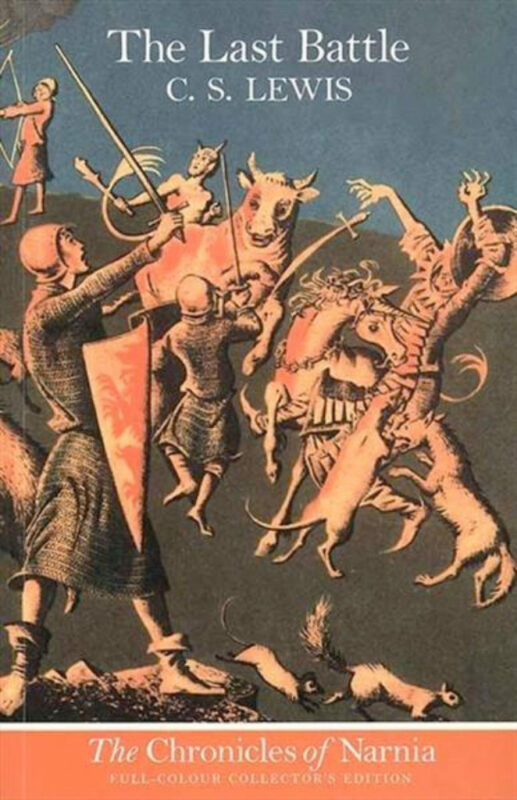 “Remember that all worlds draw to an end and that a noble death is a treasure which no one is too poor to buy.”

The beginning of the end: the ape Shift finds a lion skin. Sensing an opportunity, he dresses his donkey friend Puzzle in the skin and has him pretend to be the great lion Aslan.

The crude hoax works, and Shift (who appoints himself as “Aslan’s” spokesperson) is soon Narnia’s de-facto ruler. He fells the forests, enslaves the gullible populace, and throws open the gates to an enemy nation in the south. Worse is coming. In our world the apocalypse will be heralded by four horseman. Narnia gets one, and he rides a donkey.

Where The Magician’s Nephew was the Book of Genesis for Narnia, The Last Battle is patterned upon Revelations. Its plot points – the false prophets, the signs and omens, even the sybaritic decadence of the ape – are drawn beat-for-beat from Revelations and often you can identify the exact chapter and verse. But Lewis does something that John of Patmos doesn’t: he writes affectingly about the psychological devastation caused by the final days.

The book’s best passages describe the confusion and heartsickness of the Narnians under the fake Aslan’s rule. The Great Lion has returned at last…and he’s doing this? Previous Narnian villains (Jadis, Miraz, and Rabadash) were clearly usurpers and outsiders, but now the tyrant is Aslan himself.

The King and the Unicorn stared at one another and both looked more frightened than they had ever been in any battle.

“Aslan,” said the King at last, in a very low voice. “Aslan. Could it be true? Could he be felling the holy trees and murdering the Dryads?”

Suddenly the King leaned hard on his friend’s neck and bowed his head.

“Jewel,” he said, “What lies before us? Horrible thoughts arise in my heart. If we had died before to-day we should have been happy.”

“Yes,” said Jewel. “We have lived too long. The worst thing in the world has come upon us.”

“You will go to your death, then,” said Jewel.

“Do you think I care if Aslan dooms me to death?” said the King. “That would be nothing, nothing at all. Would it not be better to be dead than to have this horrible fear that Aslan has come and is not like the Aslan we have believed in and longed for? It is as if the sun rose one day and were a black sun.”

“I know,” said Jewel. “Or as if you drank water and it were dry water. You are in the right, Sire. This is the end of all things.”

The book also has the best villains of any Narnia book, or at least the most villains: Puzzle, Shift, Ginger, Rishda, Tash, and Griffle. Lewis deserves credit for keeping them separate, with their own personalities and motives. Puzzle’s a goodnatured dimwit who redeems himself by the book’s end. Shift’s motives are silly: he’s a glutton who takes over Narnia because he wants more fruit.

“But think of the good we could do!” said Shift. “You’d have me to advise you, you know. I’d think of sensible orders for you to give. And everyone would have to obey us, even the King himself. We would set everything right in Narnia.”

“What!” cried Shift. “Everything right?—when there are no oranges or bananas?”

“Well, you know,” said Puzzle, “there aren’t many people—in fact, I don’t think there’s anyone but yourself—who wants those sort of things.”

Shift and Puzzle soon end up over their heads and become pawns of the Talleyrandian tomcat Ginger and the foreign warlord Rishda. These two are cynical unbelievers who use the idea of gods to manipulate the Narnians and Calormenes alike. They would have agreed with Seneca that “Religion is regarded by the common people as true, by the wise as false, and by the rulers as useful.”

But Ginger and Rishda are too wise for their own good, because they accidentally summon the Calormene god Tash to Narnia. He’s depicted as a nightmarish bird-headed demon with four arms, evil incarnate. But the book’s most interesting antagonists are Griffle’s band of dwarves, who learn that Shift has been fooling them and resolve never to believe in talking lions again…with the result that they deny the true Aslan when they meet him.

The book could be read as racist and often has been been. Its plot (a white country being overrun by brown-skinned invaders) evokes Jean Raspail’s Camp of the Saints as much as anything, and it was written contemporaneously with the Windrush. It’s possible Lewis intended some sort of political point about immigration.

But it’s not particularly likely, either. The Calormens are a careless blur of vaguely Oriental tropes, their motives are the economic exploitation of Narnia rather than a racial Great Replacement, and their religion (which is polytheistic and involves human sacrifice) seems more like the Aztec one that Islam. Lewis doesn’t really care about them: they’re a McGuffin to support his eschatological metaphor. There are many bad Narnians, as well as a good Calormene soldier. Also, in the post-Narnian afterlife “…Lucy looked this way and that and soon found that a new and beautiful thing had happened to her. Whatever she looked at, however far away it might be, once she had fixed her eyes steadily on it, became quite clear and close as if she were looking through a telescope. She could see the whole southern desert and beyond it the great city of Tashbaan.” So it seems there are Calormenes in heaven, though I doubt they still worship Tash.

The only possibly racist passage comes after Tirian, Eustace, and Jill brown their faces to impersonate Calormenes.

Then they took off their Calormene armour and went down to the stream. The nasty mixture made a lather just like soft soap: it was a pleasant, homely sight to see Tirian and the two children kneeling beside the water and scrubbing the backs of their necks or puffing and blowing as they splashed the lather off. Then they went back to the Tower with red, shiny faces, looking like people who have been given an extra-specially good wash before a party. They re-armed themselves in true Narnian style with straight swords and three-cornered shields. “Body of me,” said Tirian. “That is better. I feel a true man again.”

…But I think the contrast intended by “I feel like a true man again” isn’t Narnian vs Calormen but disguised vs undisguised. Tirian is himself again, instead of pretending to be someone else. Even if it’s not, these words come from a fictional character whose opinions are not necessarily Lewis’s.

The book does provides a window into Lewis’s opinions on various topics. Susan, famously, is not present at the end.

“My sister Susan,” answered Peter shortly and gravely, “is no longer a friend of Narnia.”

“Yes,” said Eustace, “and whenever you’ve tried to get her to come and talk about Narnia or do anything about Narnia, she says ‘What wonderful memories you have! Fancy your still thinking about all those funny games we used to play when we were children.'”

“Oh Susan!” said Jill, “she’s interested in nothing now-a-days except nylons and lipstick and invitations. She always was a jolly sight too keen on being grown-up.”

“Grown-up, indeed,” said the Lady Polly. “I wish she would grow up. She wasted all her school time wanting to be the age she is now, and she’ll waste all the rest of her life trying to stay that age. Her whole idea is to race on to the silliest time of one’s life as quick as she can and then stop there as long as she can.”

Again, take from that what you will. But I co-sign Lewis’s sentiments: your teenage years are the silliest of one’s life and if you have fondness for them I pity you.

We learn about Lewis’s feelings on socialism, which were complicated. Like Orwell, he didn’t see communism and capitalism as necessarily opposed, but two different whips that power can wield. Some of Shift’s tirades could have come straight out of Animal Farm.

“And now here’s another thing,” the Ape went on, fitting a fresh nut into its cheek, “I hear some of the horses are saying, Let’s hurry up and get this job of carting timber over as quickly as we can, and then we’ll be free again. Well, you can get that idea out of your heads at once. And not only the Horses either. Everybody who can work is going to be made to work in the future. Aslan has it all settled with the King of Calormen—The Tisroc, as our dark-faced friends, the Calormenes, call him. All you horses and bulls and donkeys are to be sent down into Calormen to work for your living—pulling and carrying the way horses and such do in other countries. And all you digging animals like moles and rabbits and Dwarfs are going down to work in the Tisroc’s mines. And——”

“No, no, no,” howled the Beasts. “It can’t be true. Aslan would never sell us into slavery to the King of Calormen.”

“None of that! Hold your noise!” said the Ape with a snarl. “Who said anything about slavery? You won’t be slaves. You’ll be paid—very good wages too. That is to say, your pay will be paid in to Aslan’s treasury and he will use it all for everybody’s good.” Then he glanced, and almost winked, at the chief Calormene. The Calormene bowed and replied, in the pompous Calormene way:

“Most sapient Mouthpiece of Aslan, the Tisroc (may he live forever) is wholly of one mind with your lordship in this judicious plan.”

“There! You see!” said the Ape. “It’s all arranged. And all for your own good. We’ll be able, with the money you earn, to make Narnia a country worth living in. There’ll be oranges and bananas pouring in—and roads and big cities and schools and offices and whips and muzzles and saddles and cages and kennels and prisons—Oh, everything.”

“But we don’t want all those things,” said an old Bear. “We want to be free. And we want to hear Aslan speak himself.”

“H-n-n-h,” grunted the Bear and scratched its head; it found this sort of thing hard to understand.

The Last Battle seems like almost nothing in summary. Narnia is taken over by the rival state of Calormen, then things get so bad that Aslan ends creation and starts a new one. But the book is hard hitting and emotionally moving, and takes in the Narnia series in directions that are unusual for it, although not unusual for the author.

Lewis actually wrote a fair amount of dystopian fiction. The Great Divorce and The Screwtape Letters contain striking portrayals of hell (the original dystopia), depicting it first as a rainy joyless town and then an absurd bureaucracy. That Hideous Strength is a dry run for George Orwell’s 1984 that depicts Great Britain falling under the spell of rampant NICEness. And in 1956, he swung a wrecking ball through Narnia. It’s a grim end to the series – the plot could be summed up as “everyone dies, plus some asterisks and footnotes” – but it’s an emotionally powerful one. Lewis could have turned Narnia into a production-line franchise like the Famous Five or the Hardy Boys – an infinite-money crank, with Lewis spinning the handle until the magic disappeared. Always Christmas and never winter. But he realized that good things must come to an end. If they don’t, they cease to be good.