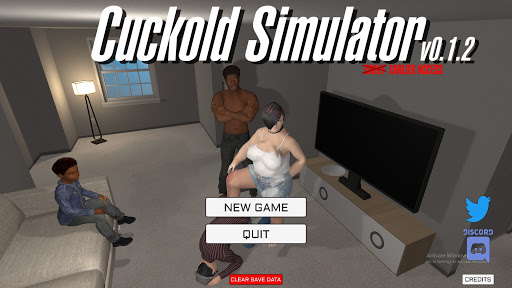 I get out of my car after a long, hard, and black day at work. I can’t wait to turn over my paycheck to my wife. We divide household duties 50-50: I earn the money and she spends it. It gives me pride to be a provider figure. The more money I give her, the more she’ll respect me.

My sedan is a mid-grade Asian import. I’ve put a strategic Biden/Harris bumper sticker on it to reflect my political stance. Frankly, if you’re not outraged by what’s happening, you’re not paying attention.

I approach my house. Like the car, it’s tasteful, if understated. Don’t be fooled, though. Inside this house, passion runs like a raging river. Believe me, I’d know – sometimes my wife lets me watch.

I open my front door. Bizarrely, it swings outward, hitting me in the face. It’s like the door isn’t even aware that I’m there. This is the nature of my existence. My family relies on me, I am the only gainfully employed person in the building, and yet often I’m treated like I’m invisible. That’s fine. I don’t need a medal. In any clock, the most important gears are hidden from view.

I enter, and find my infant son Tyrone Jr crawling around on the floor. That won’t do. He might crawl out of doors and get run over by a car or eaten by a dog. The neighbours whisper about TJ, but I don’t listen. Yes, he has a darker skin color than me, and yes, he has less of my genetic material than you’d expect from the terms “my” and “son” but a true family overcomes obstacles like that. When you think about it, being willing to raise another man’s baby makes me even more of a dad.

Honestly, there’s a lot resting on my narrow, sloped, scoliosis-afflicted back. I’m the breadwinner. I cook and I clean. I sometimes feel unappreciated by my family, but I know it’s mostly in my head. I’m important and respected. Truly. Why else would they allow me to live with them?

In mirrors throughout the house, I catch glimpses of myself. I am making the “soyface“, an open-mouthed expression of childlike delight commonly seen among emasculated men as they mindlessly consume media such as Star Wars and Marvel movies. Did you see The Rise of Skywalker? I did. Barely. It was hard to see the screen past my permanently clapping hands.

Outside my house, I hear a schoolbus shifting gears. My other son DeShawn must have come home from school. He’s twelve, and aspires to be a rapper. Once, I told him he’s not a rapper. He said that I’m not his daddy. That stung, but I just smiled. With a quick wit like that maybe he’ll accomplish his dream. I just wish he’d stop stealing my Funko Pops. They’ll be worth a lot of money someday. They’re collector’s items. I know this because the company selling them said they’re collector’s items.

I go upstairs, and find my wife alone with TJ and DeShawn’s biological father, Tyrone Senior. He is a large, muscular black man with an active arrest warrant in his name. I am outraged to find them alone. How dare they? …Won’t they at least allow me to prep the bull?

Apparently that’s not going to happen today. Tyrone tells me to hand over my paycheck and then leave. I ask him how much he wants. He says “all of it”. I guess I haven’t acquired enough good boy points with my wife. I hesitate, Tyrone asks if we have a problem, and I quickly say no. I’d never fight him. He might hurt his knuckles on my face. Anyway, it takes the bigger man to walk away from a confrontation.