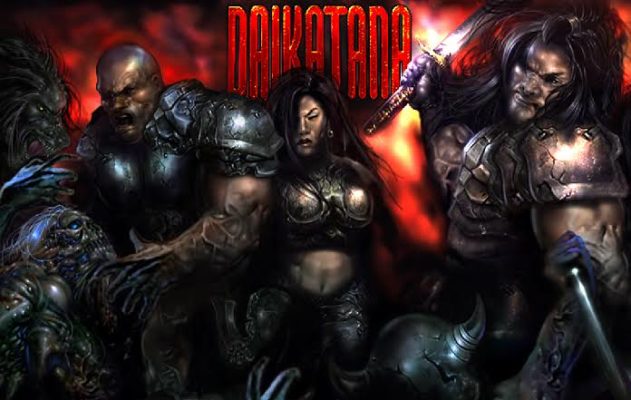 Radio personality Ron Bennington described stand-up comedy as a game of “tell a joke, or become the joke”. Your audience has invested time into you, and they want it repaid. If you bomb and your jokes fall flat, be afraid. Your audience came here to laugh, and they’re going to do it, one way or another.

Id software co-founder John Romero was an extremely hot property in 1996. Heavily promoted as gaming’s bad boy, he’d just left id software and had launched a new company, Ion Storm, under the mantra “design is law”. Ion Storm promoted their debut game Daikatana with an ad campaign suggesting that FPS games had become lame and boring, and now long-haired John Romero was going to crash the party on a skateboard and kick everyone’s ass. Radical, dude!

Daikatana was supposed to be the next big thing. Instead, it became a joke. It missed its 1997 ship date, and then perhaps half a dozen ship dates after that. It finally came out in 2000 in a plague field of negative publicity, having gone through two engine upgrades, a full dev team, and thirty million dollars in funding.

What went wrong? It’s a long and fascinating story (told here by Gamespot’s Geoff Keighley) which, along with Duke Nukem Forever, has become an industry cautionary tale on hubris and perfectionism. Daikatana essentially ended Romero’s career as a Triple-A game dev, and he’s spent twenty years bouncing from company to company, leaving a shallow strew of indie and mobile shovelware.

Assuming you’re immune to the charms of Gunman Taco Truck and Pettington Park, Daikatana will likely remain Romero’s last hurrah as a game dev. Was it any good?

That depends on what you want. If you’re eager to play four badly designed half-a-games at once, with a graphical engine years out of date, it’s quite good.

It’s a first person shooter featuring “RPG” “elements” (LEVEL UP flashes on the screen occasionally, and this apparently does something.) Unlike Doom the game attempts to tell a story and establish a rich universe filled with lore, although it isn’t successful on either count.

We start off with a cutscene: an old man who is dying of polygon deficiency explains the plot to you. It goes on for quite a while. The developers must have realised they were boring the player, because they have ninjas jump out of the shadows, beat the shit out of the old man, and run away…after which he continues explaining the plot to you. A mood is created. I don’t think it’s the mood the developers intended.

The story is confusing, and the game as a whole lacks thematic direction. What’s the vibe here? Berserk? Bill and Ted’s Excellent Adventure? Doom? It’s neither funny nor dramatic. It reminds me of a ten year old boy play-acting Spiderman fighting Sonic the Hedgehog while he smashes action figures together.  There’s time travel, ancient Greece, a black sidekick called Superfly (note the spelling) and an Asian female sidekick who’s into martial arts, a giant sword…

But that wouldn’t have mattered if the game was fun. Fun has an excellent track record of elevating games above their own conceptual stupidity. Not so here.

The game technically has “depth”, but so does the Marianas Trench. Eleven thousand meters of water and squid-shit isn’t interesting, and nor are Daikatana‘s huge stack of poorly-integrated, half-tested features.

Why shove an RPG-lite stats system into the game when it has no visible impact on gameplay? Why is there an XP system? What does it do, and why do I care? Why design unique enemies for every level when they all feel like variants of either “annoying fast flying enemy” or “annoying slow-moving bullet-sponge”?

None of the weapons obey logic. There’s a double-barrelled shotgun that fires six shots at once (???), a rocket launcher that shoots two twisty rockets that hit everything except the enemy you aimed them at, etc. This is MC Escher with a gun catalog. The titular weapon, the Daikatana, proves to be a gigantic sword that blocks a large portion of your screen when you have it equipped. It murders everything it touches, including your peripheral vision!

But the game’s absolute nadir is the sidekicks.

They have the worst AI I have ever seen. They run in front of your gun. They get stuck on corners. They get crushed by elevators. They ignore weapons on the ground and charge heavily-armed enemies using their fists. When they die you lose, and they exist at all times in a state of permanent about-to-die. They are comprehensively broken.

Here’s what you should do instead: download the community-made 1.3 patch, which deletes the fucking sidekicks from the game, thus rehabbing it to “barely playable”. You’re welcome.

The graphics are visually interesting at times (how often do you see the colour purple in FPS titles?), but are mostly dull and ugly. There’s no vibrancy. Why did they upgrade from the Quake engine when the colour scheme recreates most of Quake’s excesses?

What else was happening in 2000? What did the market look like? System Shock 2, Perfect Dark, Deus Ex, Half Life, Unreal Tournament, NOLF, and two Quake games. Next to these titles, Daikatana looks like a game from 1997, with inferior playability. It isn’t as bad as people say: it’s worse.