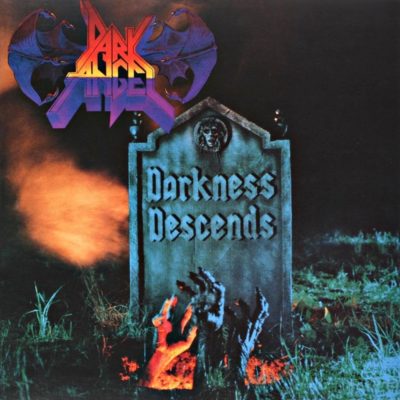 1986’s Darkness Descends was one of the most extreme metal albums of its age. I don’t mean the 80s. I mean the age of recorded music. Even in 2021 it’s a shock and affront, a pile of little limbs, a terrifying journey that no combination of programmed drums and Protooled guitar tracks can replicate. Darkness Descends is the Tsar Bomba of metal: decades old, technologically obsolete, but still (in some ways) unsurpassed. It’s less an album than a signpost: mankind went this far into hell and no further.

It’s a good example of pre-death metal (dying metal?). Although it’s still thrash – the vocals are barked but not growled, the guitars are just a semitone down, and the drums lack the intimate, in-the-room quality of early death metal – you can still see that by 1986 we were ready to leave thrash behind.

The riffs are a speed-picked blur, the sound of a guitar sawing through metal. The drumming is intense and technical. And although the seven tracks are still songs, they’re also less than songs. They barely hold together, and constantly seem on the verge of exploding like tempered glass. Dark Angel weren’t the first to point in that direction and they never played death metal themselves (their career ended on a different milestone, the tech-thrash Time Does Not Heal), but once you get here, Scream Bloody Gore, Morbid Angel and Cannibal Corpse become inevitable.

There’s also a surprising Metallica influence. “Black Prophecies” is the band’s attempt at a Master of Puppets style epic, and there’s Hetfieldian touches throughout – like how the title track has that descending-power-chord-over-choppy-riff trick straight out of “Disposable Heroes”. Jim Durkin was a big NWOBHM fan, and “Merciless Death” opens with a tribute to Iron Maiden’s Steve Harris.

Slayer is an even more immediate touchstone. Although Darkness Descends edges out Reign in Blood in quality and heaviness, Gene Hoglan would often mourn the fact that the label couldn’t get Darkness Descends out sooner than November 1986, by which time they were derided as “Slayer babies”.

Like Reign in Blood, Darkness Descends is very, very, very fast. The most excessive tracks are “Darkness Descends”, “The Burning of Sodom”, and “Perish in Flames” which are around 250 beats per minute. Unbelievably, these songs were actually performed faster live. Drummer Gene Hoglan was famous for slamming No-Doz before a show and just beating his kit into scrap metal. It’s a miracle he still has a heartbeat, and maybe he doesn’t.

Fast metal is boring, and these songs are Darkness Descend’s least exciting moments. The snare registers as a weightless popping sound. The guitars lose any semblance of musical notes and become an angle-grinder. Don Doty’s vocals are just a rapid-fire “jabba-jabba-jabba” like an TV informercial salesman rushing through all the terms and conditions. I don’t always skip these songs, but I don’t feel too bad when I do.

When the album slows down, it wrecks all in its path. “Black Prophecies” is among the greatest metal songs ever recorded. If it had any more atmosphere, it’d be the surface of Venus. Tom rolls detonate like thunder. Sections develop in a dark, nauseating churn, each seeming to collapse into the next, while riffs bite like the endless teeth in a shark’s mouth. It’s an incredible song that I appreciate more each time I hear it.

It’s a lesson in how to do much with little. When I play the song back in my head, I hear all things that aren’t there: tolling bells, marching armies, and nagging violin ostinatos. But actually, the “bells” are Rob Yahn plucking high notes on his bass, the “marching armies” are Gene Hoglan playing a sycopated snare rhythm, the “violins” are Durkin and Meyer picking notes close to the bridge. These guys take generic thrash ensemble and bring a whole orchestra to life, which is amazing.

The lyrics in general are interesting, catching Dark Angel at a transitional point. Their first album We Have Arrived tended towards the”we’re a thrash band and we’ll kill you all! BEER! PIZZA! PARTY!!!” school of lyricism. Exodus, while later albums read like an aberrant psychology journal. Here, the lyrics are dark and fantastical, suggesting a world of myth and shadow.

The man singing them proves a mixed bag. Don Doty’s goblin-like barks sound diabolic and menacing, but often he lapses into a kind of talky whisper that’s pushed a bit high in the mix. Part of the problem might be the extreme speed of the songs. Another might be the fact that all the lyrics were written by the band’s drummer – Doty often seems to be struggling to enunciate troublesome syllable clusters that just aren’t natural or easy to sing (“thecityisguilty! the crimeislife! thesentenceisdeath! DARKNESSDESCENDS!!!”) It’s not for no reason that singers usually write their own lyrics, although maybe that’s another way Dark Angel anticipated death metal. It doesn’t matter who writes the lyrics of the average death metal band – the vocals are so incomprehensible and distorted that it’s impossible to tell what they’re saying. For some modern bands I’m almost sure the lyrics sheet is written after the vocal tracks are laid down.

Darkness Descends is an unusual record, and not only for its brutality. Thrash metal is characterized by formal minimalism, with all sorts of disasters resulting from pretension or overdeveloped ideas (Metallica hits that point for some people.) But Dark Angel’s more elaborate moments are the album highlights, while their attempts at ripping your face off are often a little lacking.