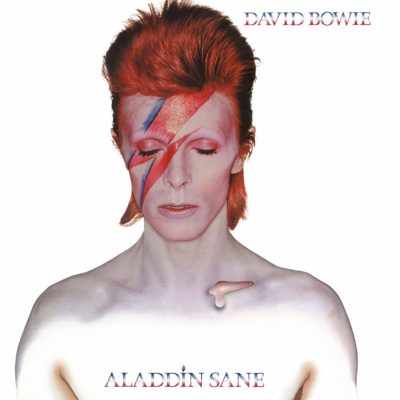 He was right to muse on it, because transition is interesting. Not medical transition (though that must have intrigued him also), but philosophical transition. Ship of Theseus. Lumpers vs splitters. Much of philosophy is based around the question “when does a thing become something else?”

Is transition a continuum, like day becoming night? Or can it be quantified into discrete steps? Historians have spent countless hours wargaming World War II, trying to isolate the point where Hitler definitely lost. Was it 1940, when the Luftwaffe was crushed in the Battle of Britain? 1941, when the United States entered the war on the Allied side? 1942, when Stalingrad held? When was the final moment that Germany could have won World War II, and after which, they absolutely couldn’t? And how thinly can we slice the bratwurst? A month? A day? A single second?

Aladdin Sane is an exposition of transition. We see Bowie at a cracking point, where fame was becoming overwhelming, a burden. He invented a new character, a guy with worms filling his brain and white-ants eating his bones, but his confusion was no fiction. Over the next year his backing band would either leave or get fired, unable to handle his egomania and drug abuse. The paranoid Berlin years have their genesis here.

Musically, it’s fierce and punishing: along with The Man Who Sold the World, this is the heaviest thing Bowie ever recorded. But it has an experimental side that, again, seems like a preview trailer for Berlin. Transitions. Beginnings and ends.

We see both sides of the album, right out of the gate. “Watch That Man” is a loud party song – Bowie (perhaps in character, probably not) is at a party, noticing scenes of glitz and glamour and pronouncing them merely “so-so”. Maybe it’s not even that. Maybe it’s about to become a nightmare.

“Aladdin Sane (1913-1938-197?)” is the end stage of that party. The song is dominated by a 45-bar avant-garde jazz solo by pianist Mike Garson. Surely Bowie’s brilliance was becoming impossible to deny by now. Damned well nobody else was doing stuff like this in 1973. What’s the meaning of the dates in the titles? 1913 was the year before World War I. 1938 was the year before World War II. Does this mean that Bowie thought that the third World War would happen in the 70s? And did it?

“Cracked Actor”, “Jean Genie,” and “Let’s Spend the Night Together” are homages to or parodies of the Rolling Stones. The guitars crush and maul, and his vocals sound both inspired and exhausted. “Time” sees a new influence popping up: Jacques Brel, who he discovered via Scott Walker. “The Prettiest Star” is a lovely song: it was originally his failed second single, here remade with Ronson’s guitars and some added backup vocals.

The album overflows with great music, but two songs overshadow the others.

The first is “Panic in Detroit”, anarchic and violent, a track which burns with the guttering energy of a trash fire. The female backing vocals pull its genre way from rock, making it sound as indeterminate as any riot. The second is “Lady Grinning Soul”, a delusive opium dream made music. I like it every bit as much as “The Bewlay Brothers”, which means Bowie scarcely ever wrote a better song.

Aladdin Sane is far tighter (and a good bit better) than Ziggy Stardust. The Mick Jagger meets Jiminy Cricket character of Ziggy Stardust evolved into Aladdin Sane, a manic guy caught between two transition points and being torn apart by fame. The trip is finishing, and the come-down has begun. This is 3am insomnia, the album: paranoid, anxious, and still unable to sleep.