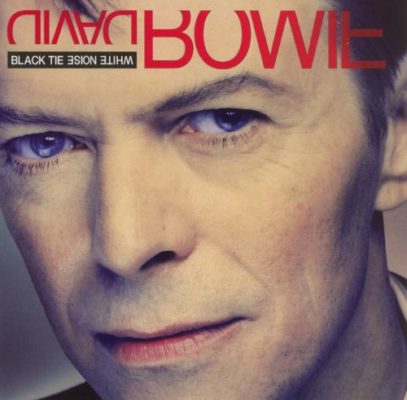 Black Tie, White Noise is legendary, and not just for having a punchable album cover. When it came out in 1993, it marked Bowie’s return from the wilderness – his first solo album in six years. Just try holding your breath for six years – I bet you can’t do it. You probably won’t even make it halfway.

Bowie spared no effort in trying to tank it. He re-united with Let’s Dance producer Nile Rogers, who recounts baffling self-sabotage inside the studio. A potential smash hit (the Madonna-ripping “Lucy Can’t Dance”) was demoted to a mere bonus track. The final tracklist seems to emphasize the artistic and non-commercial songs, particularly a piece composed for David’s wedding to Somali fashion model Iman.

BTWN is a cold, funky dance record. They pulled 70s disco out of cryogenic suspension, partly thawed it, and added some 90s production elements. The album contains the snappy, bright Cheiron Studios sound that was all over the charts at the time, along with sampled beats and grafts from jazz and swing. At first the album’s sonics impress (as Let’s Dance‘s did), but soon you want to hear distorted guitars, and roughness, and humanity. BTWN is too clean. Actually, it’s germophobic.

A couple of the songs connect with me. “They Say Jump” delves into societal pressure through the metaphor of Bowie’s half-brother Terry, who had committed suicide some years before. It’s the closing parenthesis to “The Bewlay Brothers”. “Nite Flights” is a cover of a Scott Walker song, adding lots of air to what was already a large and generous-sounding arrangement. And “Pallas Athena” is a furious and crushing dance track, woven out of thudding drums and stentorian vocal samples.

The title track is a self-conscious aping of “Fame” from Young Americans. Carlos Alomar’s riff is replaced by a funky slap-bass part, the descending “fame”s at the end replaced by ascending “yow-yow-yows” at the beginning, John Lennon replaced by someone called Al B Sure! (whose career spiraled the drain after doing this collaboration). The half-rapped ostinato (“Black! Tie! White! Noise!”) is quite good, although I could do without the “crankin’ out the white noy-oy-oise” chorus.

The lyrics are McCartney’s “Ebony and Ivory”: a guilty white guy talking about how mankind is a beautiful rainbow, with a black musician dutifully playing Br’er Rastus in his minstrel show. I always dislike these types of songs, mostly they’re never as brave as they think they are. “I’m a face, not just a race!” Bold words in 1993. The lyrics reference the Rodney King riots, but still end with all the usual cliches of black and white man holding hands and becoming one. You know what I’d like to hear? A song that’s about how different we are. That maybe black and white aren’t the same, and we need to come to terms with that in whatever way we can. It would be career suicide, but at least it would be a fresh take on things.

The rest of the album is unmemorable. What artistry it has overwhelmed by a driving sleet of digital breakbeats and pad synths. Bowie’s vocal melodies are slender things, unable to support the weight of the arrangements. To be blunt, I don’t need to listen to Bowie for 56 minutes straight, nor do I need to hear about his wedding. The tacky “modern” elements just emphasise how little of the old Bowie is present on the album.

Comparisons can be drawn to another album, twenty years earlier, when Bowie was also newly married. But where The Man Who Sold the World became a classic, Black Tie, White Noise is sadly the first of many inconsistent and often uninteresting 90s efforts.