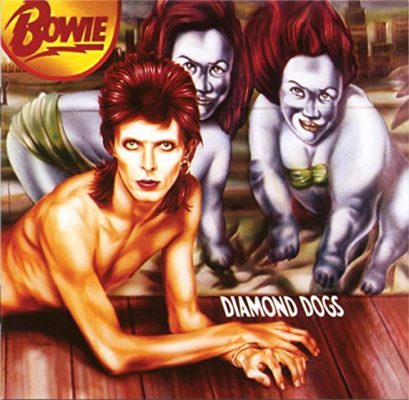 David had a remarkable talent for throwing fragments down at random and having them form a complete picture. Diamond Dogs is a fractured album with mismatching halves (the first a concept about a post-apocalyptic gang that rides around on rollerskates, the second an abortive attempt at a stage musical version of Orwell’s 1984) but it ends up being one of his most complete-sounding records.

The halves feed each other, and bleed onto each other. The post-apocalyptic tracks form an optimistic beachhead, which the 1984 side effectively quashes. First the fire, then the flood. I’m reminded of Harlan Ellison’s A Boy and His Dog: gaudy adventures in the wreck of the Earth, with a grim final page.

The title track is probably the worst song: it sets the tone, but doesn’t get out of the way when it should. Why is it six minutes long? It’s the most blatant homage to the Rolling Stones Bowie ever wrote, and one of the last. Sometimes I skip it.

“Sweet Thing/Candidate/Sweet Thing Reprise” is a genius-touched epic, farmed from William S Burrough’s technique of cutting up lines and reassembling them (again with the happy accidents). Bowie’s singing is wonderful, and the mood established by the scrambled lyrics are delirious scissored photographs of urban decay. The three tracks are curiously interchangeable, they all seem to work fine on their own, or in any order. Maybe their positioning is itself a cut-up.

Then “Rebel Rebel” opens with its scorching signature guitar riff, played by Bowie himself. This was his first studio release without Mick Ronson, and he seemed eager to upstage his former axeman. There’s interesting production elements going on in “Rebel Rebel”. Rock guitarists typically lay down two guitar tracks side by side (one panned left, the other right.) Bowie, it appears, only recorded one, panned dead center. This gives his tone a sharper, more brittle sound (compare “Rebel Rebel” with “Watch that Man” or “Hang Onto Yourself”), it cuts rather than bludgeons. It’s a great riff, however it was recorded. There’s a legendary story about how tennis legend John McEnroe (fresh off of Wimbledon), attempted to play it in his hotel suite, and botched it so badly that Bowie himself overheard from the room below, and banged on the door to correct him.

As with “Diamond Dogs”, “Rebel Rebel” feels gaseous. There’s a perfect ending point at 3:30 that Bowie blows right past, continuing for another minute. Rock DJs soon got into the habit of dropping the axe at three and a half minutes, and soon Bowie was doing the same (as you can hear yourself from the version on Reality, for example). Some of David’s songs (eg “Breaking Glass”) grew longer with time: this one grew shorter.

Then the 1984 half of the album begins, which is the stronger side. The songs work marvelously, whether alone or together, and there’s no pacing issues evident.

“Rock ‘n Roll With Me” is the last dance before the war begins. “We are the Dead” is a descending vamp through parlous gray madness, with none of “Rebel Rebel’s” optimism. The tinkling organ sounds aggressively and effectively fake – the sort of musical instrument they’d have in Oceania.

“1984” is a fascinating funk rock experiment, quite similar to the music on Young Americans. Then the album’s greatest track arrives, the astonishing “Big Brother”. “Chant Of The Ever Circling Skeletal Family” ends the album in primitive violence. The sudden, jarring end (in the middle of “Brother”) is particularly effective.

There’s still another story to Diamond Dogs which has nothing to do with apocalypses or Orwell: David succesfully staying in the game as an artist. At the time, the glam genre he’d hung his hat on was falling to pieces. For the first time, T-Rex’s new album was not a top 10 hit, and they never had another one. Mott the Hoople had failed to follow up “All the Young Dudes”. Was Bowie next? Would he join the rest of the glam rockers in obscurity, paved over by uncaring history?

Happily, Diamond Dogs was the album that achieved escape velocity, breaking free from Planet Glam. He left his old style behind, revealing that it had needed him more than he neededit. This is more than an album. It’s the sound of David fighting for his life and winning.