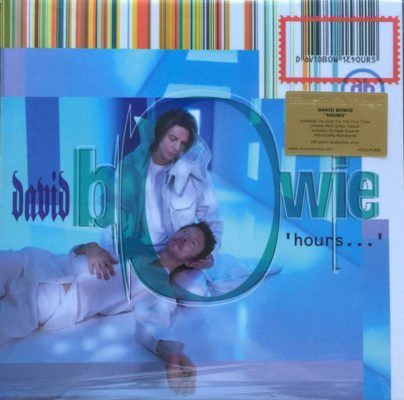 Every culture has a beloved national dish that amounts to “take all the leftovers and put it in a pot”. Hours is David Bowie’s version of that, an unfocused collection of tracks from a videogame, an unfinished Reeves Gabrels solo album, plus some other crap, with a production job so lame it ruptured time and space.

Look at the cover. You already know how it sounds. Tepid, breezy, housewife-hooking AOR pop rock with no edge or bite. Bowie tried to get TLC to guest on “Thursday’s Child”. I don’t know what’s sadder: that he seriously had that idea or that it probably would have worked.

“Thursday’s Child” is the first single. It features a lame R&B-inspired backbeat, gratuitous female backing vocals, and greasy, syrupy synths. Someone once said that synths are to American musicians what firewater was to the Native Americans. I agree, and wish they were what smallpox blankets were for the Indians.

“Something in the Air” is six minutes of boredom and glitchy sound effects. I don’t know what Reeves Gabrels is playing on guitar. It doesn’t relate to the music in any way. It’s like they recorded him noodling at soundcheck time and put it on the record. This was Gabrels’ final studio release with Bowie, quitting while he was behind.

“Seven” is an acoustic song with very loud slide guitar parts. Not bad, but anyone could have written it.

“What’s Really Crappening” is Bowie’s infamous “cyber-song”, meaning its recording was broadcast via livestream. There were probably people who racked up a $40 phone bill over their 56ks listening to Bowie make this – they should have watched the video of the dancing baby instead. The lyrics were partially written by a fan, Alex Grant, who won a contest on Bowie’s website. Nobody can find any trace of Grant now. He may have entered the witness protection program.

You get the idea. I dislike hours greatly, there’s something cold and dead about it that I don’t hear in any of the other “bad” Bowie albums. Even Never Let Me Down and Tin Machine I have odd charm that renders them lovable from a certain perspective, but this has none (and no artistry either). This is a strong contender for the worst thing Bowie ever recorded on a major label.