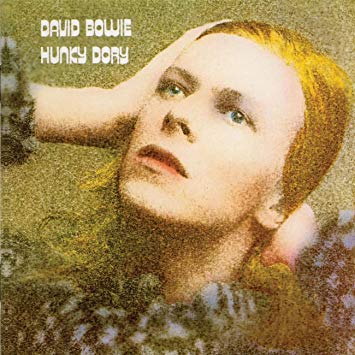 (Note from management: review is terrible. We estimate that it will be demolished and a better one built by no later than 2039, allowing for cost overruns.)

Hunky Dory is a lovely collection of music, a classic among classics. Pick a Bowie fan, and ask for their ten favorite songs. I guarantee that at least two and probably three songs mentioned will be from Hunky Dory. (For the sake of sample purity, ignore any female whose answers contains “Magic Dance”.) “Changes”, “Oh! You Pretty Things”, “Life on Mars?”…they just keep on coming, to the point of embarrassment. Damn it, David, you’re supposed give the rubes one good song, and then unload the filler. You’re not supposed to pile up like, four or five classics on each side!

Books could and have been written about why these songs remain listenable and timeless in the face of (ch-ch-)change, bur some of Hunky Dory’s finest moments occur in the the deep cuts. “Andy Warhol” is a song nobody talks about much, and it didn’t place at all in Chris O’Leary’s 2015 Bowie song poll. Yet it contains Mick Ronson’s greatest riff, a jagging, colorful flamenco line that was later borrowed by Metallica for the bridge to “Master of Puppets”. Bowie performed the song personally to Warhol at the Factory in September 1971 – apparently, Warhol completely ignored the song he’d just heard, and commented on Bowie’s shoes!

“Queen Bitch” rips off Velvet Underground and takes them to a new level of violence, pounding the listener into a bloody pulp. But the greatest moment arrives at the very end of the album, with “The Bewlay Brothers”. The song is part acoustic folk, part studio experiment, with a mysterious set of lyrics that fans have spent five decades trying to tease apart.

Bowie would trash the song as portentous nonsense in interviews. But there’s something obviously personal about “Bewlay Brothers”, as if there’s real feelings underneath the fanciful patina of dwarves and rituals. For example, “My brother lays upon the rocks/he could be dead, he could be not” could only refer to Bowie’s schizophrenic half-brother Terry Burns, whose seizures would cause him to collapse in public. Bowie’s disavowals seem like an attempt to cordon off the song, and stop people from looking at it. As a man who traded in identities as much as any spy, did he slip up on this one, and reveal the truth?

Hunky Dory‘s weakness might be the production and presentation. Tony’s Visconti’s absence behind the mixing desk is a pretty big deficit: the instrumentation sounds thin. And although the pacing plays some fun tricks (the unresolved tension at the end of “Oh! You Pretty Things” gets cleared up straight away by the F in “Eight Line Poem”) overall the album seems misweighted, with a foppish, baroque first half and a hard rocking second half.

Although it’s only my fourth favorite Bowie album (behind Low, Station to Station, and Aladdin Sane…or damn it, maybe Diamond Dogs?), it’s the one with the catchiest songs. Bowie ruled the 70s like the Beatles ruled the 60s, but if you were to shave his career to the very finest point, it would start with “I still don’t know what I was waiting for” and end with “…malio”.