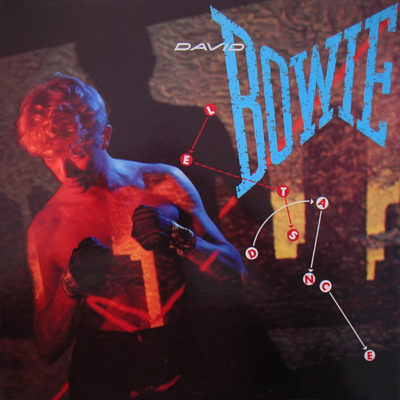 “Great” is a landmine in the English lexicon. It means “eminent or important”, but has picked up a secondary meaning of “qualitatively favorable”. Hitler was a great man, and Hitler wasn’t a great man. Both of these statements are true; sometimes important things are not good and vice versa.

Let’s Dance is great. The album broke Bowie in the United States, and it’s clearly one of the most important things he ever did. Soon Bowie would be on the run from its shadow, trying to recreate it and failing (Tonight), then unsuccessfully circling back to what he had before (Tin Machine). But time has diminished Let’s Dance, and made its weaknesses more apparent. You might say it’s dancing on feet of clay.

The songwriting is very smart (absolutely to a fault). The title track opens with harmonised vocals stepping upwards in thirds, a postmodern reference to the Beatles’ “Twist and Shout”. “China Girl” contains a pentatonic major melody that suggests the famous Oriental Riff. Everything’s allusions and callbacks, Bowie trying to fill dance-floors while remaining palatable to theater types.

The production glitters like diamonds. Cubic zirconium, maybe, but for a few minutes you’re having too much fun to notice. Nile Rodgers’ mix is all edge and cut, meant to decapitate dancers through a club PA. A careful listen reveals that the mid-range frequencies are scooped away, turning the album into a flashy but hollow facade. It’s all highs and lows, and lacks substance. There’s little guitar (why pay Stevie Ray Vaughan for his time and then not use him?), and when it appears it sounds thin and weak.

Side A contains all the hits, plus the forgettable “Without You”. Side B is the more uncertain and interesting one. “Richochet” puts its snare on the 1 and 3, giving it a staggered rhythm that sounds “off” even though it’s perfectly on. The lyrics are portentous enough for the drums to sound like bomb blasts, with Bowie’s vocals a robotic call to take shelter. Not a great track, but you finally see some struggle from Bowie, which is a relief on an album as mercilessly polished as an Apple tech demo.

“Cat People” is a remake, “Criminal World” a cover, but both come off fairly well in Nile Rodgers’ hands (although “Cat People” loses its mystery and rushes to the climax too early). “Shake It” is a disposable dance song that pads out the minutes, and then the album’s over. It’s shocking how fast the Let’s Dance ends, and how little music you’ve heard.

There was nowhere to go after Let’s Dance. It annexes itself with sheer power, the way nuclear warfare ends the need to its existence. Let’s Dance is exterior and nothing else: an amazing exterior, nothing really has depth or stays with you. Low grows stronger every time I listen to it, and Let’s Dance grows weaker.

The album is like its production job – a big but empty musical souffle. It was a monster that Bowie never needed to fear: he was better than it, always. Let’s Dance is great album, but I cannot say that it’s a good one.