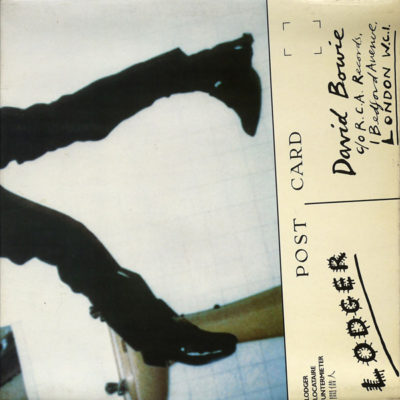 Despite being heralded as the last of “the Berlin Trilogy”, the sequence of albums Bowie while in tax exile, it sounds nothing like Low or “Heroes”. Whereas those were singular canvasses full of sound, this is just a collection of songs – some from Bowie’s top shelf, some from the bottom, and one from the wastebasket beneath it.

There’s a odd disunity within Lodger, it’s if nobody was quite sure of what they were doing. Maybe they weren’t. It’s no secret that the creative partnership of David Bowie and Brian Eno was falling apart by this point: Eno’s “compose in 17/8 while standing on your head and gargling noodles” tricks were growing irritating, and weren’t producing usable material. One stunt involved the backing band switching instruments. Another involved Eno drawing eight random chords on a blackboard and then having the band play whatever one he pointed at. Entire days were wasted in this fashion, producing nothing but countless hours of garbage. After Lodger landed on the charts with a desultory thud, Bowie chose not to work with Eno for his next release.

Which isn’t to say Lodger doesn’t have moments of greatness, which it does. But for the first time since Bowie landed in continental Europe, it has failures. Not lots of them, but they’re hard to ignore, particularly when one of them is up there with the most awful songs he ever wrote.

But let’s start with the best part: the three leading songs. “Fantastic Voyage” is a flamboyant, sashaying piece that reaches back to his Station to Station sound. Its lyrics connect mental illness and cold war paranoia. It’s a simple matter: we all have bad days (the Thin White Duke could attest to this), but national leaders have bad days, too…and they have the ability to destroy the world. This is the flaw in the doctrine of Mutually Assured Destruction – it relies on everyone in the world being rational and sane. What happens when nuclear weapons end up in the hands of a lunatic? The line “learning to live with someone’s depression” is darkly mocking. When the bombs start to fly, we might not need to learn.

“African Night Flight” is a paranoid freakout. It sounds a bit like a 33 RPM record of “Aladdin Sane (1913-1938-197?)” played at 45 RPM by mistake. Panicky, compelling stuff. “Move On” takes chords from “All of the Dudes” (a potential megahit that Bowie foolishly gave away in 1974 to nearly-forgotten glam act Mott the Hoople), and reverses them, turning a pop song into fascinating avant garde pop. As with “Heroes”, the lyrics seem laid on with a trowel, as if he’s parodying what a typical songwriter would write.

“Yassassin” is four minutes of drizzling shit. I can’t find words for much I hate it. It’s like middle school, when your teacher decides you need a dose of capital-c Culture and you get dragged off to see a kabuki show or something. Fuck off. I don’t want culture. I don’t want to broaden my horizons. Throw this song in the bin.

Side two begins with the musically average and lyrically excellent “DJ”. Bowie is at his cruelest and most sardonic here, he’s an egocentric disk jockey who thinks he’s king of the dance floor (“I got believers!” he crows). But as with Rupert Pupkin in The King of Comedy, we soon realise there’s something very wrong with him. DJs tend to be a bit “off”: they’re all performance, all illusion; no matter how full or how sweaty the dance floor gets, other people wrote the songs they’re playing. The crowd is grinding to Lady Gaga and Beyonce, not the guy behind the stacks, but many DJs lose sight of that. It’s a trade that attracts delusional narcissists.

“DJ” paints a picture of a man dangerously lost to fantasy, the real world slipping past his fingers like a shiny black record. He’s “(at) home, lost my job”, but that’s okay. It’s “realism”. Getting fired builds street cred, and he wouldn’t have it any other way. He says “I’ve got a girl out there, I suppose”…why are the last two words there? A repeated line in the chorus is “can’t turn around, can’t turn around”. Why can’t he turn around? Perhaps if he does, he’ll see that he doesn’t have quite so many “believers” as he thought. Perhaps he has no believers at all. Maybe it’s all an illusion, and he’s just a pathetic failure with no job and no girlfriend, spinning discs to an audience of nobody in his apartment. The song ends with the word “believers” skipping on its final two syllables. “Leave us…leave us…leave us…”

“Look Back in Anger” is a good track, inspiring Oasis and rendering them irrelevent in three minutes and eight seconds. Soon after, Lodger starts running into engine problems again. “Boys Keep Swinging” is fun and bouncy, but doesn’t stay with you. Nudge-nudge, wink-wink gaybaiting in the age of Jerry Falwell and Save Our Children doesn’t seem shocking, just hack. Then we get the ham-fisted “Repetition”, an unpleasant song about a man punching his wife around.

Album closer “Red Money” is a decent reworked track from The Idiot, although it sounded better with Iggy Pop singing it. More to the point, it’s now the second piece of old rope on a ten track LP (third, once you realise that “Boys Keep Swinging” has the same chords as “Fantastic Voyage”). Remember how Low and “Heroes” needed to make weight with covers and cast-offs? Oh, wait. They didn’t.

One can be too hard on Lodger. It’s another strong album, with lots of classic Bowie moments. But it was promoted wrong by RCA Records, and continues to be promoted wrong by fans to this day. It is not of a company with the two albums before it. The real Berlin Trilogy (according to to Bowie-ologist Chris O’Leary) is The Idiot (an Iggy Pop album hijacked at gunpoint by Bowie, and if you disagree you’re deaf), Low, and “Heroes”, with Lodger being a couple of footnotes. I agree, except “Yassassin” is a turd smear.