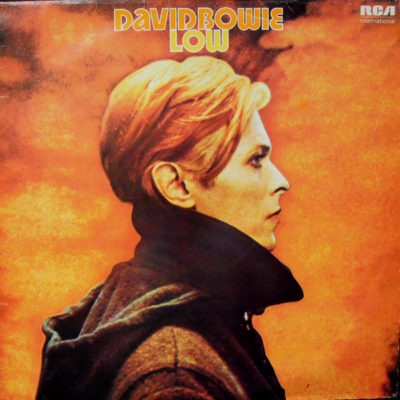 Keeping up with the Jones. After an artistically creative and personally devastating period in LA (full-cream milk, red peppers, and cocaine are a balanced diet, right?), Bowie went into hiding in Europe. Low is meant to meant to suggest “keeping a low profile”. He failed. Keeping a low profile would necessitate a bad album, and Low is simply unforgettable.

They “There’s old wave, there’s new wave, and there’s David Bowie” In a record store, they might say “there’s David Bowie, then there’s Low”. Nomimally the first of the so-caled “Berlin Trilogy” (despite parts of it being recorded in France), Low doesn’t quite sound like anything else he’s done.

Side A has songs, bending punk rock, art rock, . Bowie has seldom written better songs, and Eno’s technical wizardry makes the music seem otherwordly. This is most noticeable on “Speed of Life”, which has varispeeded delay that sounds like strobing flashes of light hitting the Hubble telescope from a distant cosmic object.

The songwriting is sparse and free. Entire songs are threaded together with simple ingredients: a single hook, or rhythm, or texture, but are all the more impactful for it. Lead single “Sound and Vision” has no words until the halfway point, and they’re just minimalistic automatism. No references to the Kabbalah or homosexuality. Just Bowie looking at blue light through his window, waiting for ideas.

“Be My Wife” surprises with familiarity, jarring you with a conventional verse/chorus pop song. Bowie was so good at being fake that there’s often a creepy, uncomfortable sense that he’s dropping the mask and momentarily sharing real feelings, knowing that nobody would ever know. The harmonica-driven instrumental “A New Career in a New Town” spins away the remaining grooves much as “Speed of Life” began them: in adventurous fashion.

Side A is an amazing achievement for Bowie, for Eno, and for rock. It is also Low’s worst side.

Side B deeply, profoundly well-realised, a haunting exploration of sound. It’s ambient music made jagged and broken, like a priceless Qianlong Vase smashed on the floor, allowing the viewer to find whatever beauty they may in the fragments.

People often refer to it as “the instrumental side”, which isn’t right, as only “Art Decade” lacks lyrics and vocals. But they’re brilliant, unforgettable pieces of music, and showcases just how much atmosphere Brian Eno could evoke with tape loops and a one-finger melody.

The dominant ambient piece is “Warszawa”, evoking a city of rust and memories, ancient fumes pouring from its skin. Futuristic Minimoog lines counterpoint church bells and religious chanting in a strange, brutal language from another world. It’s six minutes long: hermetic, cthonic, and almost impenetrable upon first listen. You have to peel it back like a palimpsest, and I’m still not sure I fully get it. David Bowie used to play this live. As a set opener, no less.

“Warszawa” was written by a four year old. Well, the first three notes, anyway. David needed to attend court to square away some matters from the Los Angeles fiasco, leaving Brian Eno to try and come up with something. Tony Visconti’s four year old son wandered into the studio, discovered the piano, and plonked out three notes – an A, a B, and a C. Suddenly inspired, Brian Eno dashed to the boy’s side and completed the melody. I don’t see Visconti’s son credited in the album booklet. The tyke should sue.

The album’s remaining pieces gently come down from this crescendo. “Art Decade” is chilly and still, its melodic ideas frozen like images under glass. “Weeping Wall” has very busy instrumentation, its elements sometimes clashing and other times working in harmony. “Subterraneans” is deep, slow, and forbidding. If the album was a day, this would be the deepest watch of the night.

There’s bonus tracks, too, if you get the right version of the album. “Some Are” seems like a marriage of the two halves of the album, while “All Saints” is extremely harsh – industrial ambient rock as corrosive as drain cleaner. I’ve heard rumors that “All Saints” was recorded a long time after Low, and indeed, it sounds very different in its production approach. You get a remixed version of “Sound and Vision”, which belongs in a bin.