David Bowie – Never Let You Down 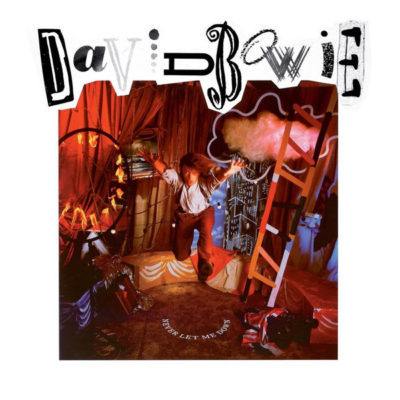 David Bowie (it is known) often used characters, such as Ziggy Stardust, The Thin White Duke, and The Other One.

Here, in 1987, we see the debut of his shortest lived and most controversial character: Suck Man.

Suck Man’s origins are shrouded in mystery. He appeared once on this album, and then never again. David himself never spoke about him, and some Bowie historians claim he never existed at all. But by carefully listening to this album (from another room, wearing a HAZMAT suit) I can now reveal his full, tragic story.

Who is Suck Man? Essentially, he is the sad remains of a once successful rockstar, haunted by his glory days. He has no grasp at all on what his fans want or what might sell, so he’s trying to do everything at once. French horns? Here you go! Rapping? Yeah, he can do that too! Guitar solos? You bet! How about french horns, rapping, and guitar solos all at once, thrown together in a way that doesn’t make sense?! Imagine a whole album like that?! W…Wouldn’t that be wonderful?

Suck Man is not a malicious figure. He’s sad, and pitiable. He clings to your ankles, begging for your acceptance. He’ll do anything. He just wants to be loved. If only he could be a hero again, if just for one day.

Never Let You Down is extremely bad, but at least it’s not bad in a boring way, like Tonight, or in an insufferable way, like Tin Machine I. It has entertainment value. There are songs I’ve listened to more than legit good Bowie tracks, and that’s saying something. The most obvious things wrong: the ridiculous production and arrangements. These aren’t songs, they’re crime scenes. The gated snare drum is obnoxiously loud. The backing singers are hideously overbearing. Bowie’s vocals vacillate between R&B and proto-Britpop. The album really does sound like 2 or 3 Michael Jackson tracks playing over the top of each other, all out of step.

It actually contains a little bit of good music – maybe more than Tonight did. “Time Will Crawl” has a cool, slinky saxophone line and a set of strong musical ideas. The Iggy Pop cover “Bang Bang” cooks nicely and ends the album well. Both these songs have twenty things shoved into them that don’t work and which I outright hate, but I see the skeletons of good music inside the layers of cancerous blubber.

Midway through the burnout of this musical Hindenburg, we get “Glass Spider”, which is not the worst song, but certainly the most embarrassing. Baby spiders have lost their mommy. Suck Man practically gift-wrapped this track for you. Not only is this track on the album, he actually titled the accompanying toured, and it was the second track. For God’s sake, at least Paul McCartney had the decency not to subject us to a “Wonderful Christmas Time” tour!

Suck Man also likes socially conscious lyrics. This was the era of Live Aid and Hear ‘n’ Aid, where every rockstar wanted to make a difference. Don’t ever play this to a former African child soldier. The gated snare will trigger PTSD flashbacks to AK-47s in the trenches of Sudan.

The rest of the album is ghastly. You listen in morbid fascination. Believe it or not, there’s an even worse track (“Too Dizzy”) that Bowie took off the record out of shame. Imagine being too bad for Never Let You Down – it’s like playing Mike Tyson’s Punch-Out and getting KO’d by Glass Joe.