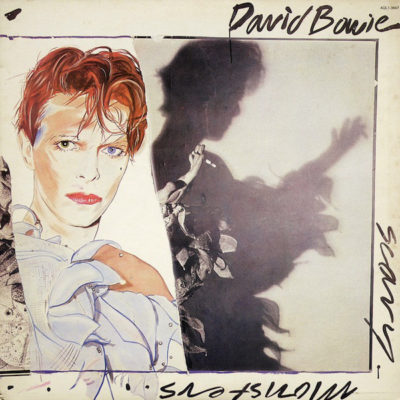 It’s also often spoken about in the same sentence as “scary” and “monsters”. Though that’s less surprising, since that’s the name of the album. It would be strange to talk about the album without mentioning its name, although it would be a fun challenge to do so (and also without identifying it another way, such as “the Bowie album from 1980”). Kafka led a man to the executioner’s block without ever mentioning his crime. Could you arrange words in such a fashion that a reader understands the music, without ever actually being made aware that the album exists?

Scary Monsters is about decay. Not decomposition, not morbidity, just…things falling apart, in a general sense. It’s an album about the crack in your ceiling, and the verdigris embroidering your bathroom floor. All the things you’ve been meaning to fix, even as they advance to an event horizon where it’s not worth the bother.

Bowie assembled some of the finest guitarists to ever set plectrum to string, and made them play sloppily. Vocals are deliberately flat, or mangled oddly in the mixing room (the heavy tremolo rattling the chorus of the title track both disturbs and fascinates). The lyrics discuss fashion and aging, yet they all seem to be about the House of Usher. The building is tumbling down, we’re caught inside it, and we can never leave. Bowie sings about disillusionment and weariness, his voice cracked and broken. None of his albums – not even Aladdin Sane or Outside – evoke this kind of genteel neglect.

“It’s No Game, Pt 1” opens the album in thuggish fashion. Someone took the song, punched it around, and gave it a black eye. Fripp’s guitar part swirls like stagnant water, the drums kick out at you, and it’s interrupted by outbursts of Japanese female vocals, as though someone spliced in the hourly Harajuku traffic report. Although this is the closest solo Bowie ever went to punk rock, it’s cerebral and calculated beneath the blood: more like Public Image Ltd than the Sex Pistols.

Other tracks document various vanishing trends in Bowie’s music. One of the last great Bowie epics (“Teenage Wildlife”) can be found here, as can shorter but equally memorable cuts like “Up the Hill Backwards”. Be sure to get the version with the bonus track, “Crystal Japan”, which was written to score a TV ad for a sake company (of all things) but dredges up strong memories from the Brian Eno years.

“It’s No Game, Pt 2” is a slower and less enthusiastic reprise of the first part. There’s an old Hollywood joke: at eight in the morning you’re shooting Citizen Kane, at eight in the evening you’ll settle for Plan 9 From Outer Space. This song captures that kind of exhaustion and weariness, freezing it under glass.

This album has a reputation as a Bowie threw away most of his artistic pretensions and went fishing for hits. Happily, he caught one (“Ashes to Ashes”). Even more happily, the reputation is wrong: he didn’t throw his artistry very far after all. There’s louche experimental moments all over Scary Monsters. This is the rarest thing: an artistically successful commodity. It’s also one of his most consistent and listenable works. Clearly, the future was bright. He would not put a foot wrong in the 1980s.