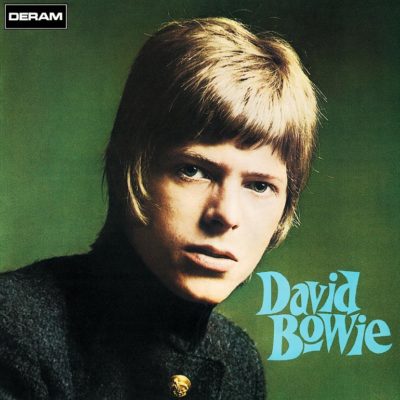 Well, it depends. What do you consider a beginning? Metallica’s first album is Kill ‘Em All, but that’s just a Diamond Head imitation. Their signature sound emerged on Ride the Lightning. That’s their beginning. The first Mad Max movie came out in 1979, but it’s just a violent exploitation film: the series truly starts with Mad Max 2. Stephen King’s The Dark Tower series begins with hallucinatory fragment The Gunslinger: but the story only truly takes shape with book 2, the Drawing of the Three.

First efforts are usually flawed efforts, contaminated by inexperience, self-doubt, and outside interference. They’re not “real” starts, any more than Michelangelo’s first cast-off lump of clay was his first sculpture. David Bowie probably existed by 1969, and certainly by 1970. But in 1967, the cards were still falling. Whoever this is, it isn’t him. Not yet.

David Bowie is musically bizarre in light of his later albums: fourteen show-tunes for shows that never existed. It never misses a chance to be quirky, chirpy, and naff, the songs are bedecked with organ and keyboard parts, and Bowie (who had just turned twenty) does a fine job of sounding like an elderly sex pest.

It draws aesthetics from music hall, a venerable tradition that was fading in the 1960s, and is now utterly unendurable to modern listeners. I have never met a person who likes music hall. Have you? Do they exist? I’ve met people who claim they’ve seen aliens, but the elusive music hall fan still avoids me.

Music hall featured (and relied upon) stage shows and live performances: it may have been the the 19th century’s equivalent to the music video. The album suffers for its lack of a visual element, and feels a bit flat. No doubt Bowie had planned out short films and mime performances and dancing bears for each one, but then the album flopped. The songs are like colorful little parrots, their plumage covered by a dropcloth. We can hear them well enough, but they’re less charming without their bright feathers.

The music is mostly in good order. Even at twenty, Bowie knew how to put a song together. “Love You ‘Till Tuesday” strides into its chorus with a ritardando that made me say “nice” out loud in the middle of an empty room, which was embarrassing. “Sell Me A Coat” is a catchy ohrwurm, hand-tailored for the single release it never received.

The lyrics are a high point, although they’re definitely more interesting than good. Music hall was “low” entertainment, attracting people gate-checked out of polite society, and it played music to match. Bowie takes full advantage of this and just lets it all hang out, writing anything that will scan, no matter how stupid or awful or anti-social.

“We Are Hungry Men” is a humorous science fiction dystopia about a dictator’s solution to overpopulation. I laughed at the line about people being allotted a cubic foot of air to breath, although the part about China someday having “a thousand million” people didn’t age well.

“She’s Got Medals” is Bowie’s first song to deal with transvestism (“Passed the medical! Don’t ask me how it’s done!”), and “Little Bombardier” takes a nasty turn into pedophilia. The closing track is a spoken-word piece called “Please, Mr Gravedigger”, which tightrope-walks between being ludicrous and genuinely horrific.

There’s a lot of filler and half-songs (and quarter-songs), and I won’t pretend I want to hear things like “Come and Buy My Toys” ever again, but the songs are so diverse it hardly matters. They’re presents under a tree: if you don’t like one, you try your luck with another.

Bowie did the same thing – you can see many possible futures for him, refracted in the facets this strange, strange album. A mime? An actor? A vaudeville hoofer? A hippy? The genius who wrote Hunky Dory? I’m glad he chose the future he did, because it easily could have gone another way. In June 1967, an album came out that would change the face of pop forever. This, however, is not a review of The Beatles Sgt Pepper’s Lonely Hearts Club Band, but the first David Bowie album.