David Bowie – The Buddha of Suburbia 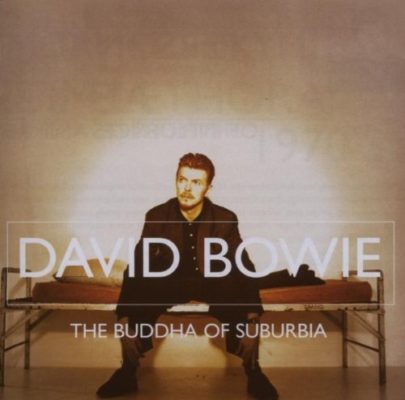 On my first listen, I hated the first song so much that I didn’t listen to the rest for a long time. This was a mistake: “The Buddha of Suburbia” might be adult contemporary glurge, but everything after it is fascinating, and much of it is good.

It’s Bowie’s scrapbook circa 1993, filled with doodles. It’s his most disjointed studio album if you consider it one, the hyped-up penny arcade chiptune of “Dead Against It” is followed by the adventurous world music of “Untitled, No. 1”, which is followed by about six minutes of gentle fuzz and crackling sounds. Some tracks are reworks of the TV show’s music, while others are new. A proper soundtrack to The Buddha of Suburbia still hasn’t surfaced, and likely never will.

The book, from what I remember, was about being a mixed-race Britain, separated from both white and Indian. The songs all exist alone, and can’t be discussed in relation to each other.

“Sex and the Church” is a house track that prefigures Black Tie White Noise. It makes its point – my main problem is that it’s incredibly overlong, and only has about two ideas.

“The Mysteries” is Bowie’s first ambient track since 1981. It sounds similar to Brian Eno’s Ambient 1: Music for Airports, which was created to be both “interesting and ignorable”. An organ builds ominously, like a cloud that never causes rain. Again, it’s very long, but it’s an intriguing experiment.

“Ian Fish, UK Heir” is an anagram of “Hanif Kureishi”, and it’s an even stranger ambient piece that evokes peaceful unlistenability. Sometimes hints of melodies appear in the suffocating carpet of fuzz.

“Untitled, No. 1” is loaded with exotic instrumentation, and Bowie sings in another made-up language. Why no title? Scott Walker released an album in 1984 called Climate of Hunter where most of the songs had no names, they were just “Track Three” and such. This was intentional, he felt that titles would overbalance the songs like poorly-weighted boats – the listener would focus overmuch on the title instead of the lyrics. There might be a similar logic here, as “Untitled” certainly seems too broad-reaching to be pinned down the way “Warszawa” et al can. Chris O’Leary thinks it’s supposed sound like a painting, which is another credible interpretation.

The standout is “Strangers When We Meet”, although you’d never know if you only heard the Buddha version, where the fluffy production robs it of its power. It appears in a much stronger form on 1. Outside, and I still consider it a track from that album.

The final song is “The Buddha of Suburbia” again with Lenny Kravitz on guitar or something. It continues to suck.