David Bowie – The Man Who Sold the World 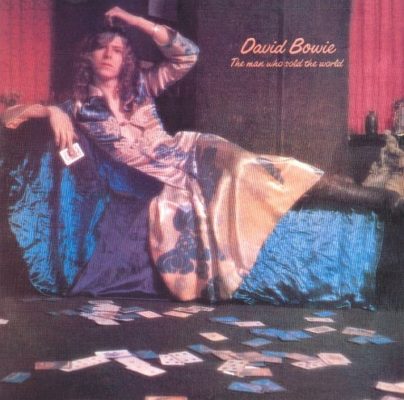 Oscar Wilde espoused an idea called kaloprosopia, creating oneself as a beautiful character. “Life has been your art. You have set yourself to music. Your days are your sonnets.”

Discussions of who you really were irrelevant to Wilde (and still are, I guess, as he’s dead). People misunderstand everything anyway, so why not be misunderstood as something interesting? Turn yourself into the Taj Mahal, which has so much paint and white marble that nobody can believe there’s plain sandstone underneath.

I don’t know to what extent Bowie liked Wilde. All I know is that he appears on this album’s cover in a dress, and in two more years he’d declare himself gay in the pages of Melody Maker, and twenty years after that he’d declare in Rolling Stone that he was never gay and it was all a publicity stunt, and thirty years after that his former wife Angie would allege to a biographer that she’d caught him in bed with Mick Jagger. Reality? Truth? What’s that?

By 1970, Bowie’s career hadn’t amounted to much. A minor hit with “Space Oddity”, and a follow-up called “The Prettiest Star” which sold 800 copies. Commercial rejection caused him to throw caution to the wind and write some of his most bold and startling material. The Man Who Sold the World is a heavy metal album, recorded several months before Black Sabbath’s Paranoid, an album it nearly matches in riffs and intensity.

Unlike Space Oddity, he had a tight band around him now (an early version of the Spiders, lacking only Trevor Bolder on bass): particularly Mick Ronson, who nearly dominates the album with his guitar work. Tony Visconti was learning a trade at a rapid pace, and his production work almost becomes another instrument.

“Running Gun Blues” was a track Bowie never seemed to keen on performing live after he got famous, for whatever reason (“I’ll slash them cold, I’ll kill them dead! I’ll break them gooks, I’ll crack their heads!”) but it rocks hard and has some strong vocal work. Terrible lyrics aside, it’s a notably early entry in the “crazy Vietnam vet” genre; the album was recorded only a few months after word of the Mai Lai massacre arrived in the United States.

The album doesn’t have one closing song, it somehow has two. “The Man Who Sold the World” is the record’s catchiest cut. “The Supermen” is apocalyptic and Wagnerian, with Bowie shrilling out his lines like an Etonian robot Hitler. Either song would work as an album closer, and it seems only a trick of fate put “The Supermen” last.

But the tracks are like planets orbiting the sun that is “Width of a Circle”, an eight minute epic that predates Ronson’s entrance to the band, although I cannot imagine anyone else playing it. The song is driven by massive riffs, and lead breaks that burn like excoriating fire. Apparently, this became Bowie’s “costume change” song in the Ziggy Stardust era. He’d leave the stage entirely, allowing Ronson to solo over “Width of a Circle” for up to ten minutes!

The lyrics are pretty interesting, fusing the Rolling Stones’ sales pitch for Satanism with homosexual innuendo. I don’t know if the “circle” in the title is a reference to Dante or a something even more nefandous, and that way it will stay. As usual Bowie’s a little cleverer than the Spinal Tappery would suggest: “prayers were small and yellow”…why “yellow”? Cowardice? Or a reference to the yellow book that corrupts Dorian Gray (another Oscar Wilde connection)?

The Man Who Sold the World is full of amazing moments, and it’s a worthy start to a legendary run of albums. Ironically, Bowie himself wasn’t totally on board for it. He’d just gotten married (so the story goes), and beyond a few songs that predated the marriage, his partners in glam had some trouble getting him to write and record. The marriage ended in 1980, but The Man Who Sold the World has lasted and lasted. It’s an enduring classic, and still only his beginning.