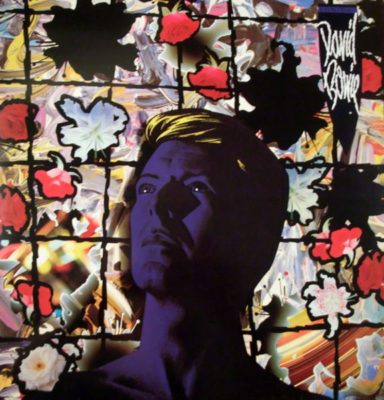 It puts its best foot forward with “Loving the Alien”, which aspires to be next David Bowie Classic. Yes, move over “Heroes” and “Rebel Rebel”, it’s time for “Loving the Alien”. Does it live up to its ambitions? What do you think? Of course it fucking doesn’t! The production is smothering, the arrangement uninspired, the melodies rancid. The pre-chorus tries to build, but there’s nothing to build from, nowhere to build to. Guitars and glockenspiels and xylophones lurch upwards in awkward quintuplets…then the chorus arrives, at which point everything goes crash on the floor.

The lyrics attempt a grand statement about peace and unity but come off as another white millionaire wondering why all those brown people in the desert don’t try not killing each other. Seven minutes later, the song ends. It’s self-conscious, tries too hard, and just isn’t good.

He phones it in for the rest of the album, and the line’s engaged. “Blue Jean” is catchy and comes off well, although the xylophonist deserves a beating. The rest of the songs just suck, unless you like Phil Collins. The only saving grace is that Bowie is barely on it.

Let’s get that out of the way, too. He plays no instruments, the tracks are propped up with backing vocals and guest performers, and only two tracks are solely credited to him. Five covers on a nine track album, if you please, padding it out to a whopping thirty five minutes. This is the second shortest Bowie album ever released (after Lodger). You could put the entire thing on a 33RPM record, and have enough space a quarter of Aladdin Sane, or “Station to Station” in its entirety. Is Tonight a serious release? It feels more like a posthumous album. It’s as if Bowie died in 1983, and his label went fishing through his rubbish bin for tapes.

I have no more words to say. It’s like reviewing a box of empty air. Call me crazy, but I actually expect David Bowie albums to have David Bowie on them.