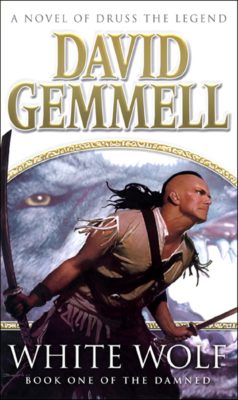 One of the final books in Gemmell’s Drenai setting, White Wolf introduces a new hero called Skilgannon the Damned.

It’s all here: the fast pace, the brutal fight scenes (Gemmell knows sixty adjectives for an axe splitting a skull), the terse and efficient characterization, the unabashed heroism, and the tension between ideals of good and evil and the complexities of reality. I truly believe that nobody ever did it better.

But “it’s all here” doesn’t feel like an unalloyed compliment, not after twenty five books of mostly the same stuff. Gemmell was an excellent but limited author, and here he paints within the lines, offering up mostly familiar pleasures. The result is a book that, while fun, doesn’t particularly need to exist.

All the usual baddies make an appearance – the Nadir, werebeast “Joinings”, assassins, shamans – as do the typical Gemmell action setpieces (here we get three fights in a tavern as opposed to the usual one or two). Once again, a character renounces their violent ways and tries to become a monk, with predictably disastrous results. And the final encounter, while exciting, couldn’t be more of a videogame boss battle if “One Winged Angel” was playing in the background.

The protagonist Skilgannon poses a particular problem: he’s just a jumble of traits from past Gemmell heroes and never emerges as a compelling and unique character. He has Waylander’s dark past, Druss’s demon-possessed weapon (the actual Druss appears in this novel, muddling things still further), Jon Shannow’s sense of having outlived his time, Tenaka’s sense of being ill-used by someone he trusted, etc. He’s supposed to be an antihero, but he only commits evil acts because of a pair of mind-controlling swords, a bit of thematic oddness that Gemmell never addresses.

Gemmell doesn’t do anything new here, but he does turn up the emotional intensity in a few places. The scenes depicting Skilgannon’s youth were fascinating, linking past Gemmell figures such as Gorben and Michanek and adding a host of new ones. Druss the Legend steals the show every time he appears, to the point where I wished the entire book was about him. And the title’s full meaning is actually pretty interesting, particularly in light of the sequel, The Swords of Night and Day.

I enjoyed White Wolf, both when I read it here and when I read its various bits and pieces in earlier books like Waylander et al. It was probably for the best that Gemmell spent his final years writing quasi-historical fiction (re-telling the Iliad). It forced him outside of his comfort zone. Gemmell incapable of writing anything but a Gemmell novel, but many of his best stories happened when he at least tried.