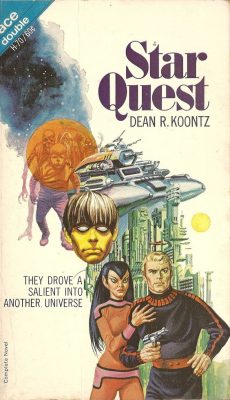 Star Quest is his first book, if it can even be called that. It’s a 25,000 word novelette that was packaged as part of an “Ace Double”, along with Doom of the Green Planet by Emil Petaja. Ace Books told Dean that his side of the split was too short, and asked if he would accept $1250 so Petaja could get $1750. Years later, Petaja revealed that Ace Books had run the same line on him – he would get $1250 and Koontz $1750!

The story’s a military SF yarn. A sentient tank called Jumbo Ten (lol) is fighting a war for the despotic Romaghins against the invading Setessins when he suddenly he realises that he’s not a machine at all, and that his brain is from a human called Tohm (gross). This realization causes him to go AWOL mid-battle and begin searching for his missing past. Interesting, there’s a piece of Stephen King juvenilia (“I’ve Got to Get Away!”) with nearly the same basic plot.

Laser cannon erupted like acid-stomached giants, belching forth corrosive froth that even the alloy hulls could not withstand for any appreciable length of time.

Why are the “laser cannon” belching “corrosive acid”? Many books fuck up their continuity, but usually not in the same sentence.

Koontz loves flowery literary passages, so our novel about a sentient tank called Jumbo Ten also has stuff like this:

But the Fates, those fickle ladies, will often change their minds and lend a hand to those they have so callously crushed before. His web of life had been spun by Clotho who immediately washed her hands of it and moved on to another loom. Lachesis, who measured the length of his strand, decided to fray it down slowly to whittle it to near nothingness. But now, just as Atropos was coming forth with her golden shears to snip it completely, Clotho had a change of heart. Perhaps, she was unemployed and restless that day, looking for something, anything to do. In any event, she stopped Atropos with a kind word and a cold stare, and began spinning again more thread…

Was “those fickle ladies” really the right phrase? Myself, I would have gone with “those goddamn broads.”

Ace Books did not use their stolen $500 to pay for copyediting, and the book contains even more spelling errors than this review. Jumbo Ten, we learn, is made of “alloyed steal”. I will allow that “He opened his corn-system” is probably an OCR error in the digital copy I found.

The story is fast paced and somewhat exciting. And it does have ideas, like a sci-fi invocation of the “multiverse” theory well before Heinlein wrote The Number of the Beast.

But Tohm/Jumbo Ten’s motivations are too stock to be interesting: he wants to go home, find his girlfriend, etc. These universal impulses are supposed to make him sympathetic, but they’re too universal: he loses his identity in a sea of other sci fi heroes who are characterised in exactly the same way. He might be convinced he’s a living person, but he does not convince the reader.

In 1968, it would have been the literary version of fast food: made cheaply and consumed quickly. But now, it’s something more: an interesting curio from a very famous writer’s past. Authors only get one first novel, and it’s fascinating that this was Koontz’s. Themes of individualism are the only thing bridging his work from then to now. Otherwise, this is a totally different writer, and a reminder that (despite arguments otherwise), we fundamentally aren’t the person we were yesterday, and also not the person we will be tomorrow.