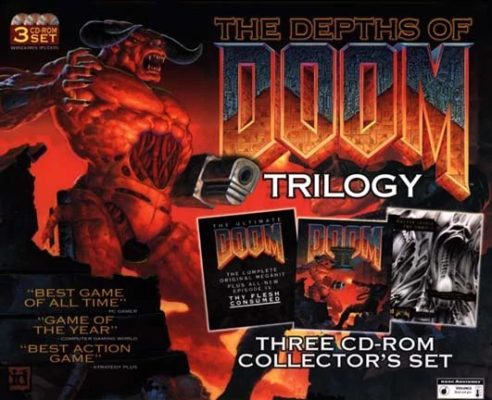 Doom didn’t receive a proper retail release for a long time. For years, the correct way to get the game was to log on to ftp.uwp.edu and stay up all night downloading it on your 14.4k modem. This wedded the game to early internet culture: the idea of buying Doom in a store seems strange, like viewing a Pre-Raphaelite work of art on an iPhone.

Regardless, Doom mission packs of varying quality/legality appeared on shelves and many included a DOOM.EXE, thus making them a handy way to get the game if you weren’t on Al Gore’s information superhighway.

1997’s Depths of Doom was one of the last. It contains the original games (Doom + Thy Flesh Consumed + Doom II), plus DWANGO, plus Windows executables (playing at 640×480 was cool back in the day, although obsolete in an era of GZDoom). It also has Master Levels, a 21-level set that are generally superior to the originals in quality (aside from the shit joke level with fifty Cyberdemons shooting at you).

The second disc contains Maximum Doom, which was ~1800 fan-made levels downloaded from the internet. Shovelware. There’s no quality control: some levels crash, most suck, some are actually for different games like Heretic and Hexen, and some are graphical and audio mods containing content from the Simpsons or Monty Python, making the entire release is technically illegal.

Some of them invite you into their lives in small but touching ways: designing levels based on their house or their mall or their school (that one didn’t age well). I’m fascinated by how many of these uploaders include text files telling you how to contact them…including their real names, and phone numbers, and street addresses.

Was the internet less nasty in 1993? Or were kids stupider?