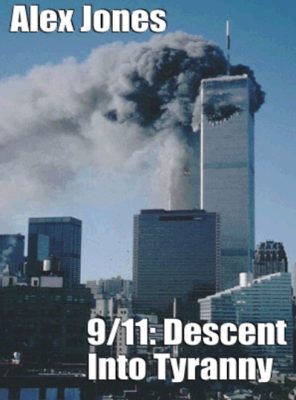 A book of 155 pages (printed in the largest type I’ve ever seen in a book not for children or blind people) and one argument: everyone is conspiring against you. Your government, your church, your neighbors, your friends, your favorite sitcom star, and your cat. The conspiracy goes right to the top, and the bottom, and the sides. Trust nobody.

But when you point at everything you’re really pointing at nothing. Jones’ omni-conspiracy makes no sense, and his book doesn’t provide a coherent picture of anything except one man’s untreated mental health problems.

I wonder how Jones got Descent Into Tyranny published in the face of a globe-spanning totalitarian dictatorship. If the One World Government exists and includes the Bush family, Gorbachev, Kissinger, Mao, “Adolph” Hitler, Stalin, Reagan, Osama bin Laden, and every billionaire and member of royalty worldwide, anyone writing a book exposing them would disappear into a black van.

Alex Jones’ worldview has no space in it for Alex Jones: he either doesn’t realize this or doesn’t care. He’s like a man claiming that evil fairies will kill you if you speak of their existence: an obvious liar with every breath he draws. Jones is impossible to take seriously and his closing request that you wire him money – “The Republic is in great danger of being completely overthrown” – provokes the response “you just told me that every President since Eisenhower meets annually at Bohemian Grove to perform human sacrifice. What’s left to overthrow?”

But logical consistency isn’t important to Jones or his audience. A 2012 study found that conspiracy theories form a positive correlation matrix. Belief in one predicts belief in a second (and a third, etc). This remains true even when the theories contradict each other. In other words, if you answer “yes” to the statement “Princess Diana faked her own death”, you are more likely to answer “yes” to the statement “Princess Diana was murdered.”

Sane people want to make sense of the world: they might be wrong about everything, but at least they will be wrong in an internally sensible wrongness. Conspiracy theorists, however, are driven by narcissism of the intellect: they alone know the truth, and everyone else is a sheep. They binge-watch Youtube videos and doomscroll Twitter because this validates them as people: they’re Neo, taking the red pill, committing an unthinkable act of bravery just by sitting in front of their laptop, ingesting nonsense. Theories are like dollars: the more of them you have, the richer you are. The fact that their fortune is in fools gold, counterfeit notes, and rubber checks doesn’t matter to them.

I found Descent into Tyranny to be a slog. Jones has the loud, bullying style of a radio host who’s used to stomping on guests and callers, and reading his book makes me feel like I’m being yelled at. I pity whoever has Jones over for Thanksgiving dinner; you couldn’t hold a reasonable conversation with this person about anything.

Mostly it just plunges the book even deeper into its own epistemic quicksand. On page 101, he writes “For years, we warned people about FEMA (Federal Emergency Management Agency). The federal documents have been around for decades and include round-up plans and concentration camps.” End of section. Begin new section. This handwaving would be acceptable on a radio show, but this is a book. Can we see excerpts from these “federal documents”, or would that bloat Descent into Tyranny‘s length to an unpublishable 156 pages?

Descent Into Tyranny was written in 2002. I was curious to see how Jones’ political outlook evolved over time, as I remember Infowars being a left-libertarian website at the start. The book certainly has time for conspiracies beloved of the left: IMF, the World Bank, David Koresh as a harmless hippie victimized by The Man(tm), etc. It was published by a small outlet called Progressive Press, whose other excellent titles can be viewed online. (Excerpt: “The “Arab Spring” is revealed as part of the scheme to extend the Anglo-Zionist empire and its neo-liberal regime of plunder over the entire planet.”).

Jones was less fond of “Vladymir Putin” (sic) in 2002. In the section entitled “Putin Uses Terror”, he reveals that Putin destroyed an apartment complex using explosive plastique, killing 350 people. Fifteen years later Jones would be on Twitter writing stuff like “Looking forward to Putin giving me the new hashtags to use against Hillary and the dems… “ In fairness, Putin killed 350 people a long time ago. You have to let stuff slide eventually.

Jones runs out of material by the end, so he pads out the book with the Declaration of Independence, the Bill of Rights, and the Communist Manifesto (which was written by “global banking cartels”.) It’s gratuitous and farcical. He should have thrown in Huckleberry Finn and Of Mice and Men, then the book could have been a middle schooler’s summer reading list. Infowars’ slogan is “there’s a war on for your mind!” Alex Jones’ personal solution is to not have one.