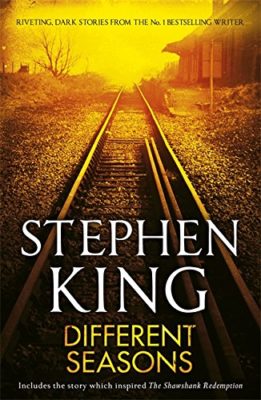 In 1982, Viking Press published four novellas by Stephen King, themed loosely (and probably ex-post-facto) after the four seasons. Someone else did it first, of course, and King seems to be referencing Vivaldi’s sonatas (even presenting the seasons in the order of Spring/Summer/Autumn/Winter). This kind of performative literary touch might indicate an attempt to step outside the horror genre, and the novellas back this up. They’re not King’s usual work.

The first novella, “Rita Hayworth and the Shawshank Redemption”, impresses the heck out of me, every time I read it. I think it’s one of the best things he ever wrote.

It contains the famous line “prison is no fairytale world”. But King’s Shawshank is a fairytale world: and the character of Andy Dufresne is as much a folk figure as Robin Hood or Paul Bunyan. The plot is very famous thanks to a Frank Darabont movie: it’s about a wrongfully convicted man (but everyone behind bars is wrongfully convicted, the worldly narrator explains), and the ingenious use he finds for a poster of a Golden Age Hollywood actress.

But a straight telling of the plot doesn’t do justice to how rich an experience “Rita Hayworth” is. Its pages seem to bleed colour and sound. Literally everything about it is fascinating, from the desperate thrust of the main story to the little asides and sketches about incarcerated life. King always shines when writing about guys in prison, probably because they “contain” the action and actors in one place (subverting the questions about “why doesn’t [insert bozo] run away?”), as well as allowing time to move as fast or as slow as he chooses.

The ending is genuinely moving, even if you know what’s going to happen. Early in the story we get a vignette about a con who owned a pet pigeon. The day after he gets paroled, the pigeon is found “dead as a turd”. That’s life. The pigeon dies. “Rita Hayworth” is a legend where the pigeon gets to live, winging away into the blue silent sky.

“Apt Pupil” is a portrait of a young sociopath. Thirteen-year-old Todd Bowden accosts an elderly German immigrant and threatens to expose his secret: he’s a former Nazi commandant called Kurt Dussander, who ran an extermination camp. Bowden doesn’t want money, he wants knowledge. He’s is obsessed with the Holocaust. Obsessed with mass graves and incinerators. He wants to hear about the Holocaust from someone who actually perpetuated it. He wants to become Dussander’s pupil.

This character is totally believable – thanks to the internet, you can encounter Todd Bowden online any time you want to. The world is full of Holocaust fetishists – let’s face it, there’s something chic and sexy about the Final Solution that other historical tragedies lack: it’s the Rolls Royce of genocides. The Bowdens of the world aren’t overtly pro-Nazi – far from it, in fact. Even notorious Nazisploitation flick Ilsa, She-Wolf of the SS dutifully informs the viewer that it’s only staging depictions of the Holocaust “with the hope that these heinous crimes will never occur again”. Whether or not you believe these cover stories, the disconcerting reality is that people still pay money to watch Judenfleisch get brutalized.

The story takes unpredictable turns, and avoids several obvious cliches. Although the relationship between Bowden and Dussander is initially one of extortion, soon they’re both in over their heads and reliant on the other to survive. Dussander doesn’t want his identity revealed. Bowden doesn’t want his all-American parents to discover his Nazi fetish. A game theoretician could teach a class based on “Apt Pupil”: Dussander and Bowden each have the ability to destroy each other, and this gives them perfect trust, as any betrayal will be punished by the other. In real life the strongest teams aren’t the Justice League, they’re La Cosa Nostra: bad guys with guns held to each other’s heads. Nevertheless, the mental (and soon physical) violence soon increases, to the point where the story explodes. A nice little tale about rattling skeletons and having them rattle you back.

“The Body” sees King going for an easy score. Plucky children, 1950s Maine, dark secret: how can you go wrong? It has plenty of connective tissue to other King stories (the character of Ace Merrill appears in a few other tales, and even Joe Camber’s mad dog Cujo gets a shout-out), but the strongest link might be to King’s own childhood.

The actual plot (four young boys go into the woods because they’ve heard there’s a dead body) is slender and almost irrelevant. The focus is on their characters, and the idealism of childhood interacting with the complexities of a world where trains and dogs and guns can kill you. It shouldn’t be news to anyone that the white picket fences of the 1950s often concealed scenes of unpleasantness, even horror, and a lot of King’s work consists of vivisecting America’s Leave It To Beaver era for the modern reader’s education. I like “The Body”, but compared to “Rita Hayworth” and “Apt Pupil” it seems conservative and safe: King colouring well between the lines.

The final novella is the least like the others. “The Breathing Method” is quite brief, almost a short story, contains overt supernatural and horror elements, and is detached from its central character in a way the others aren’t. It still has a stately literary air that separates it from his “I Was a Teenage Grave-Robber” stuff, but next to the first three it’s as insubstantial as breath on a winter’s day.

It’s about a woman way up shit creek. She’s pregnant, and the father has booked it out of town. She approaches a doctor, although not for the reasons you might expect. She wants to keep the baby, and she needs the doctor’s help.

King has made no bones about his difficulties in writing female characters, and here he avoids that difficulty by telling the story from the perspective of the male doctor. This is probably for the best, but it creates a lot of distance between us and the main character. It’s like trying to feel empathy for a person you can only glimpse through a periscope. But, importantly, it also casts the tale’s supernatural (or magical realist) elements under a shadow. Is this the truth? Or only what the narrator believes or wishes was the truth?

Hard though it might be to believe, in the 1980s the question existed as to whether King could escape the horror ghetto. These days the question is settled, and the new one is should he write outside that ghetto. Whatever you might think his neverending quest to write the Great American novel, this was an early, profitable attempt at broadening his portfolio. I just wish the final story was longer. If these are seasons, Stephen King Metro is built on the Equatorial line, where winter only lasts for a few days.