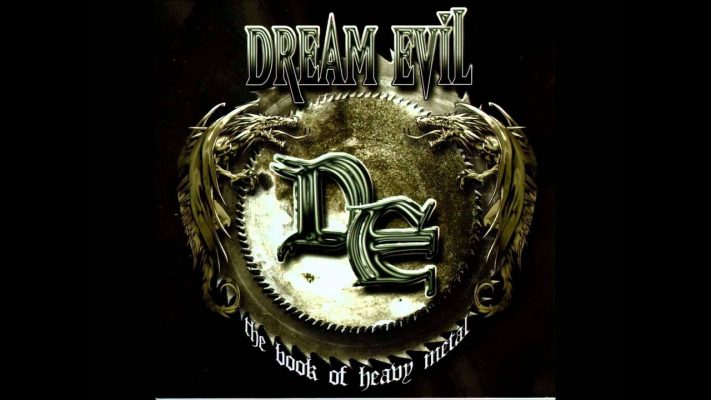 The Book of Heavy Metal was my least favorite trad power metal album once, but that was ten years ago. Now it’s nostalgic, because the genre has become unimaginably worse. Like reminiscing about a decade-old case of cancer on your skin now that you have it in your nutsack.

Dream Evil were/are a band combining several noxious trends. They’re a Band Named After A Famous Song Or Album. I won’t name names. Let’s just say that once you go past the Rollilng Stones and Judas Priest those drop off in quality. Second, they’re a Band Fronted By A Producer. Those tend to be glossy, polished turds where 90% of the effort was expended on getting the cardioid mic angled perfectly on the speaker cab and 10% writing songs. Third, they’re a Fake Supergroup. Dream Evil was founded in 1999 by Fredrik Nordström on rhythm guitar and Snowy Shaw on drums. Those are your stars. Rounding out the lineup is Peter “who?” Stålfors on bass, Niklas “seriously, who?” Isfeldt on vocals, and Gus “doesn’t count, Firewind wasn’t famous yet” G on lead guitar. They’re all good musicians, but if you have as many Swedish letters in your lineup as you do celebrities, you are probably not a supergroup.

Fourth, and most annoyingly, they’re a Funny Metal Band. You know what I mean. Songs about fighting dragons and drinking beer. They probably have stage costumes that are cute bunny rabbits or something. Wouldn’t that be ironic? Hopefully the four guys in the pit at warmup o’clock get a kick out of it. Everyone else is taking a piss and waiting for the real headliner to take the stage.

Their first album, DragonSlayer, was a solid bit of Hammerfall worship (the one-sentence verdict on Dream Evil is that they worship Hammerfall, but we persist). Their next album had its moments. Now we get to this one, which is a disaster.

When I played the first song, loud noises echoed through my condominion: my own uncontrollable laughter. What a terrible song. The principle riff is the most idiotic I’ve ever heard. The constipated “UHHH! UHHH!” backup vocals in the chorus are just asinine. It’s a quantum anomaly: a four minute song that seems to run for ten. Years ago I tried writing a review, gave up at “I want the Readers Digest version”, and that crap joke is funnier than anything on this disc.

Then we get a good song. “Into the Moonlight.” Actual power metal, with some cool hooks and vocal moments. The band comes together here. Dream Evil always had potential, they just needed  to not self-sabotage.

“The Sledge” returns us to moronic gym bro chugging. The Boys(tm) don’t appear to know what a sledge is: it’s a land-based platform that slides across snow or ice on runners, often pulled by a team of dogs. Lines like “It hit me right between the eyes” are confusing: is this a tiny sledge pulled by ants? Maybe they’re thinking of a sledgehammer, but human eyes are about two inches apart, and the head on every sledgehammer I’ve seen is wider than that. Do the band members have Fetal Alcohol Syndrome? Does Sweden have small sledgehammers? I must resolve this mystery.

“No Way”: forgettable and forgotten, a mildly uptempo song that sounds like WASP at their worst (WASPnt, innit?). “Eeeeet’s only rock and roll!” Out of all the famous, distinctive metal vocalists you could have pastiched, you pick Ozzy Osbourne? By the way, if you were waiting for a fast song, this is it. You just heard it. Good decision from Nordström: everyone hates fast songs on power metal CDs.

“Crusader’s Anthem”. Two good songs one album? Sirs, you spoil us! It has Niklas Isfeldt’s best vocal performance, and some crazed blues-inspired soloing from Gus. Someday I want to cull all the good songs off every Dream Evil record: I think there would be enough to make a 12-14 track CD by now.

We’re now trudging through a wasteland of filler, and my interest is flagging. “Let’s Make Rock.” Let’s not. “Tired” does not stick in the memory at all. “Chosen Twice” is a callback to the big song off DragonSlayer, “The Chosen One”. Don’t worry, they changed it by removing the catchy parts. “They calleth us Anti-Christ”. Doth they verily? “M.O.M.” Whatever they’re trying here, nobody cares, least of all me. “The Mirror” is unreviewable, I just heard it and I can’t think of a thing to say. “Only for the Night” has a good main riff (for once in their careers) and a catchy chorus (likewise), but the rest of the song is just drab and unmemorable. That harmonized lead part just stinks of “quick, just give me something that sounds like Iron Maiden!” “The Unbreakable Chain”. Six minutes of this rubbish? “United we are strong / but weak on our own / No one can break this chain.” No, you’re thinking of bundles of sticks. A single chain link is the strongest chain possible. Each new link of a chain makes it weaker, because the chain now has to pull the load plus the weight of the additional chain links. This detour is pointless, like this album.