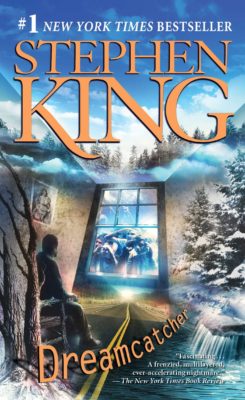 The author of Naked Lunch is heroin, with William S Burroughs a kind of scribe. Stephen King is a similar case: an amanuensis taking dictation from whatever substance he’s on. His 80s coke-written novels and tend to be manic, fast, and insane. Dreamcatcher was written in 2001 under the influence of opioids (in the aftermath of a severe car accident) and it’s slow and laboured. Reading Dreamcatcher is like walking in the dark, looking for a bus station in a part of town that might not have a bus station.

It was one of my first King books. It fairly represents his work: most of his themes and hobbyhorses are here. Big secret in a small town. Childhood innocence contrasted with adult disillusionment. Monsters. Aliens. Government spooks. Etc.

It’s set in the fictitious town of Derry, and there’s a loud reference to It along with a quieter one to Rita Hayworth and the Shawshank Redemption. It harkens back to his old work in many ways – like a reprise of a famous old song, played in half-time. I think King mostly wrote it to prove to himself that he still had it.

Four young boys rescue a retarded boy from a gang of bullies, an act so selflessly heroic they’re all but owed a supernatural reward. They grow up sharing a telepathic gift – they know things they shouldn’t know, can detect emotional states, and immediately know when someone in their group is in physical danger. Adulthood pulls them apart, but every year they gather in northern Maine for some hunting.

One year, a man shows up at their snowbound cabin. He’s lost, doesn’t know where he is, doesn’t know what day he is, and can’t cogently explain what happened to him. The reader will immediately think alien abduction, but the four main characters are slower on the uptake. The stranger soon undergoes a gruesome transformation. The four men are still on a hunting trip, but not the one they signed up for.

There’s lots of flatulence, and toilet non-humor. This is the most Cronenbergian thing King wrote; he really explores how physically disgusting it might be to have an alien incubating inside you. The subtitle might as well be “two digestive tracts, one body”.

Beaver turned his somber, beard—speckled face to Jonesy’s. ‘Do you smell it?’

Jonesy did, in spite of the cold fresh air coming in through the door. Ether or ethyl alcohol, yes, there was still that, but now it was mixed with other stuff. Feces for sure. Something that could have been blood. And something else, something like mine-gas trapped a million years and finally let free. Not the kind of fart-smells kids giggled over on camping trips, in other words. This was something richer and far more awful. You could only compare it to farts because there was nothing else even close. At bottom, Jonesy thought, it was the smell of something contaminated and dying badly. ‘And look there. ‘

Beaver pointed at the hardwood floor. There was blood on it, a trail of bright droplets running from the open door to the closed one. As if McCarthy had dashed with a nosebleed. Only Jonesy didn’t think it was his nose that had been bleeding.

Much of the book is a riff on the It formula, with adults adrift in a gruesome catastrophe while remembering stuff from their childood. Sweetening alienation (literally, in this case) with nostalgia is one of King’s favorite and most effective tricks, and he puts it to good use here.

Nostalgia is a word formed out of algos, pain. There’s a lot of pain in this book. All of the four (five?) main characters suffer debilitating wounds or worse over the book’s course, and King’s own agony seems psychically imprinted on its every page. Some of the book’s most devastating moments deal with Jonesy’s memories of a car accident. It’s one of the few parts where King surfaces through a paint-by-numbers drug fog and actually seems to be connecting to something that truly matters to him.

The most vivid monster in the book isn’t an alien but a man; a flamboyant and deranged US Army Colonel called Abraham Kurtz, who throws a quarantine zone around the northern Maine woods. He’s a great character – you enjoy the moments he’s on the page, because only then is something guaranteed to happen.

The book’s problems are pretty obvious. It’s simply too slow.

Dreamcatcher is a picture all out of focus, with no idea of what the important bits of story are or how to get to them. It meanders like thorazine hallucination. You want King to get to the point, and instead he starts distractedly twirling a loose thread of narrative tapestry with his finger. We get backstory, dumped right into the middle of an exciting action moment. We get descriptions of Maine scenery just when the plot needs to be moving. The book’s comic-book gross out elements jibe awkwardly with some pop culture pretensions, like calling his lunatic “Kurtz” and then having a character draw attention to it, just in case we missed that it’s a reference to something.

I might recommend Dreamcatcher if you’re on a luxury liner for a very long time and can only take one book. I guess you can say that opioids are not really such an interesting drug to “read”. There’s a reason Scarface focused on uppers rather than downers.