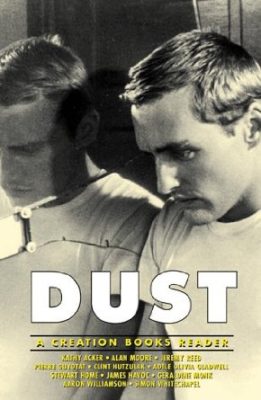 Creation is destruction waiting to happen. It’s also a publishing house. Founded in the late 80s, Creation Books started as a semi-endorsed offshoot of Creation Records and became one of Britain’s foremost underground publishers, releasing bug-eyed normie-baiting stuff of the sort that got David Britton sent to prison a few years previously under the Obscene Publications Act.

As the millennium turned, the company changed focus, and became largely a reissues house for books out of copyright (or books whose authors were incapable of disputing potential violations of such). In 2013, the company closed after 25 years in business. Lest you think this is a case of all good things coming to an end, Creation’s demise may have been accelerated by a wave of accusations of fraud and intellectual property theft against sole proprietor James Williamson. He returned fire online, protesting his innocence. It reminds me of the joke about Bill Cosby, and how it’s yet another case of his word against her word, and her word, and her word, and her word…

Dust is one of several Creation samplers/readers, containing excerpts and selections from Creation’s 1995 stable of authors circa. The publisher’s bailiwick was Gernsback-era pulp horror, French decadence, underground art films, assorted counterculture weirdness, (questionably translated) Japanese manga, and general drunken insanity. Imagine going to see Joseph Merrick at the Grand Guignol at the Bowery in Rhode Island after getting off the train at Akibahara Station: that’s the Creation experience, a kaleidoscopic drug-trip of semi-literary nonsense. If you enjoy that sort of thing, you’ll like Dust.

Kathy Acker shoves her clitdick into historical fiction with “I Become a Murderess”, retelling archetypal stories from the perspective of a rage-filled woman. Not bad. Pierre Guyotat gives us an explosion of words from Eden Eden Eden: brutal language-rending writing that picks up where Octave Mirbeau and Georges Bataille left off. Your eyes will unionise and demand overtime.

Much of the book is underground poetry from writers like Aaron Williamson, Geraldine Monk, and Jeremy Reed. A Williamson’s probably the most talented of the bunch. He’s deaf, which may have refined his aesthetic sense (vide Borges, Goya, etc.)

Alan Moore delivers “Zaman’s Hill” from the collection Yuggoth Cultures (as well as The Starry Wisdom). Good story, but short. Stewart Home contributes some unmemorable sleaze and sin – I found it difficult to tell whether he’s endorsing 90s corporate feminism or mocking it. Simon Whitechapel’s “Xerampeline” was strange but interesting. It’s like a Buñuel film, switching gears between shocking violence and erudite artistry, laving Corinthian columns in blood.

Not everything in it is great, but if you want to quickly experience a large number of Creation authors, I’d recommend Dust ahead of Starry Wisdom if you can find it cheap (although Starry Wisdom is far superior as a work of literature). And if you can’t find it cheap, well, your financial loss is yet another way of getting the Creation Books experience.