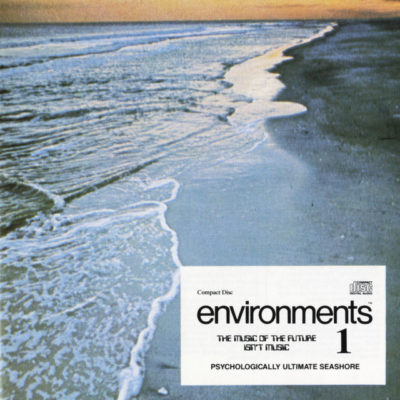 This 1969 LP contains half an hour of beach noises. “This is a joke” would be a reasonable first impression. So would “this was created and should be experienced under the influence of drugs”. After a few minutes, however, the repetitive pounding conjures images: waves curving upwards, rising and then breaking like glass, droplets descending in curtains of diamonds, sand eternally drinking, sea eternally replenishing. The ocean is an breathing lung, and this exact noise has happened over and over for as long as liquid water has existed on the planet. The LP is thirty minutes containing four point four billion years.

Listen long enough, and you start hallucinating. Your Broca and Wernicke’s areas start mistaking the crashing waves for vowels and consonents, as if the sea is speaking as well as breathing. At one point, a low, droning hum (a foghorn?) emerges through the sound of waves. It almost seems to drill through them, like an ice augur. The foghorn tells a story of man appearing and gaining ascendance over nature: but then the foghorn vanishes, and the waves remain.

Environments 1 was the work of a fascinating person from the 60s counterculture: Irving Solomon Teibel. He seems to have been somewhere between a musician, an inventor, and a con artist.

To rip the band-aid off, Environments is not what it appears. This is not the sound of nature. It’s the sound of a computer. It’s not a natural beach. It’s eight minutes of tape hacked up with a razorblade, reassembled in certain patterns, and supplemented with synthetic white noise. It contains an “ocean” to the extent that an Ashlee Simpson album contains “singing.” That it sounds like the real thing is largely because your brain was primed to expect it, and never questions that assumption.

One of Teibel’s interests was psychoacoustics: the impact of audio on humans. Although waves have existed eternally, our perception of them is highly personal, and lives and dies with us. Some people put on a fan to help them sleep, others need to turn a fan off. Stephen King writes to loud rock music, whereas I can’t write to a radio half a block away.

The potential for audio to be used as a tool of relaxation or therapy was a topic of interest in the late 60s, and in that spirit, Teibel decided to record the ocean. Using a Uher portable stereo reel-to-reel tape recorder, he recorded tapes of beaches all across the eastern seaboard of the United States of America, seeking the noises he heard in his head. His attempts failed: for whatever reason, real-life beaches didn’t sound right on tape. The missing link was neuropsychologist called Louis Gerstman, who had access to an IBM 360 at a time when mainframe computers cost around two million dollars. He and Teibel laboriously altered the tapes until they had arrived at a “right” sounding ocean that was, in fact, heavily artificial.

With this knowledge in mind, it’s easy to see where Teibel’s ocean was changed, and why. The “sentence-like” quality of the waves is deliberate: the creator wanted to evoke a language. The way they stay at precisely the same volume throughout is another choice. By the way, I’ve heard rumors that the droning noises aren’t foghorns, but Irv Teibel’s mouth.

“Listen to a computerized beach for an hour” was a rough sell, so Teibel worked over his product with consummate salesmanship. It was sold as a restfulness enhancer, and the cover plastered with exuberant testimonials (“HAVEN’T FELT SO GOOD SINCE MY VACATION”; “cured my insomnia!”; “BETTER THAN A TRANQUILIZER,”; “fantastic for making love!”) that were almost certainly written by Teibel himself.

It worked. The record was picked up for distribution by Atlantic, and it was soon selling thousands of copies. He presaged Brian Eno’s Ambient 1: Music for Airports by a full nine years, but despite this he isn’t remembered as a pioneer of ambient music. Teibel had a similar problem to Delia Derbyshire (who created the electronic Dr Who theme) – you don’t want to invent something too early, or you won’t be part of the seminal “scene” and everyone will forget to credit your innovations.

Psychologically Ultimate Seashore was side A of Environments. The reverse contains Optimum Aviary, which is just a curio. I don’t like the sound of birds, nor the shrill and irritating recording.

And apparently the seashore still wasn’t psychologically optimum enough, because the CD re-release of the 1969 vinyl contains several more changes. It’s doubled in length by (you can hear a clumsy cut where this happens), and has been equalized to take advantage of the flat response digital audio offers. A weird little joke (Teibel recording himself saying “skoosh!” or something) is excised. The LP is a remix of the ocean, the CD is a remix of a remix. Many more Environments were released after this (featuring bells, owls, thunderstorms, and more), but the first is the most famous.

Teibel described his work as “more real than real,” which raises the question: is that a contradiction of terms? Can something be realer than real? If reality isn’t to our liking, can we improve it, or does that mean it’s no longer reality?

As a child, I found a pebble at a beach that was nearly a perfect cube, as if cut with a chisel. It was a naturally-occurring rock (as far as I can tell), but it didn’t look “real” to my eye. I could have changed its shape, smashing off its corners so that it resembled other pebbles…would this have brought it closer to nature, or farther away? It’s an interesting philosophical question.

Another Teibel LP (perhaps his second most famous, after Environments) is The Altered Nixon Speech. It contains Richard Nixon’s August 15, 1973 speech, creatively edited so that he’s confessing to the Watergate break-ins instead of denying them. “My effort throughout has been burglary and bugging of party headquarters, obstructing justice, harassing individuals, and compromising those agencies of government that should be above politics.”

The recording was made in a spirit of fun – Teibel wasn’t trying to hoax anyone – but it’s an interesting “reality improvement”, from Teibel’s perspective. As a NYC-dwelling hippie of Jewish descent, he probably voted Democrat and viewed Nixon as a crook. He probably also saw his “fake” Nixon speech as closer to the truth than the one Nixon actually gave.

Computers are cheaper than they were in 1969, and although Teibel was one of the first digital tinkerers with the truth, he wasn’t the last. Farms of online trolls are forging videos to sway elections. Thousands of rappers are time-aligning and pitch-correcting their voices for Soundcloud likes. Millions of young women use Facetune to make their bodies thinner. In the accelerated evolution of digital media, it’s easy for a new reality to supplant an old one. Not everyone shares Teibel’s essentially prosocial outlook, or his sense of fun. Can we gild the lily? Should we?

Maybe the waves really are speaking. “We are not the sea.“