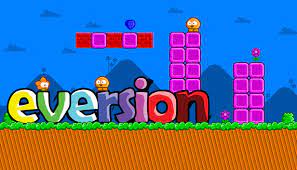 Eversion is a short horror platform game I downloaded in 2010.

That last part – me downloading it – is very important. From a certain reference frame (mine), the game did not exist until I downloaded it. So you could say I created the game by downloading it. No, don’t thank me. It was no trouble.

Eversion is a Mario clone with a unique concept: you transport yourself between variations of the same stage that exist in different realities. Fluffy clouds in Dimension 1 might be weight-supporting platforms in Dimension 2, while a solid roof might be breakable tiles in Dimension 3.

In most games you move a character around a level. In Eversion you move a level around a character. Much of Eversion consists of toggling between various layers of reality, seeking the one that will allow you to advance. New dimensions become available as you progress deeper in the game, and sometimes the game forcibly dimension-shifts you no matter what you do.

It’s like the game exists in 3D space without having 3D graphics: you can traverse the game in four directions, plus go “inward” and “outward” into slightly-different universes. As you might have guessed, the dimensions become increasingly dark; the music scarier, the monsters replaced with nastier versions of themselves, and so on.

Eversion proves a fact that’s already proven to hell and back: less is more with horror. Many of the mid-tier realities are creepy, with their slightly-off color schemes and slightly-cracked music. In the lowest dimension you’re picking up skull items while VERY SCARY horror music shrills in the background, and the result is more comical than frightening.

The production qualities are reasonable for a one-man game originally developed for a contest. The pixel art is okay, the music is really good, and the mechanics feel solid. The game’s not long – after memorizing the puzzles I could run through Eversion in about 30 minutes – and it has two endings, a happy and a sad one (perhaps sad and happy?). The least fun parts are the tiny hotspots that often have you running all over a level, jumping infuriatingly at air, trying to trigger the magic pixel.

Super Mario Bros is such a cliche that even its ripoffs have cliches. You’ve got the super-hard game that sadistically kills you every 2 seconds (and then taunts you with a kill-counter), a’la Syobon Action/Cat Mario. Then you have the parody or subversion, such as Super Hornio Brothers (or arguably Nintendo’s own Wario).

Eversion has elements of the latter, but it’s also that rarest of birds: a SMB copy that conceptually evolves Super Mario Bros in an interesting way, and thus deserves existence. You wouldn’t think improving on a 1985 platform game would be an achievement, but I’ll be damned if 90% of indie games can manage it.

You play as a flower. I never noticed I was a flower until I re-read the game’s description on Steam today – it was a detail I’d totally overlooked despite it being the central part of the game and the one thing I should have seen. I assumed I was a weird furry character. But then, how familiar are you with the details of your own body? Without looking, could you draw (or describe) your toes in such a way that they’re distinguishable from other toes? How much σεαυτόν do we γνῶθι?

Eversion was released for Windows in 2008, and has since been ported to Mac OS, Linux, and real life. Why real life? Because when I watched a Youtube playthrough of it to refresh my memory in 2021, it was nothing like I remembered. It’s possible that the graphics and sound were spruced up in a later version, but I think you’ll agree it’s more likely the world really works like the one in Eversion and I travelled to another dimension without realizing it.