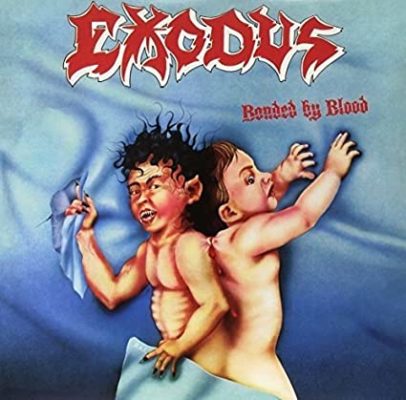 Like many classic metal albums, Bonded by Blood‘s legend is bigger than the album itself. The shadow of Exodus’s debut looms massively down the years, and the modern listener might be surprised – even disappointed – by the smallness of the album that cast it.

Exodus (along with Overkill) is often cited as “true” thrash metal, back from the days when men were men and FUCKIN’ POSERS MAAAAN hadn’t invaded the scene with their mainstream influences and melodies and coherent songwriting et cetera. Thrash metal can be awesome, but it can also be snobbish and insular, and strangely proud of its own smallness. In 1990 Exodus released a cassette entitled “Four Albums And Still No Ballad”. Is that a thing worth bragging about? Particularly when you couldn’t write an interesting ballad if your life depended on it?

Released in 1985, Bonded by Blood was actually recorded in August 1984 under the title A Lesson in Violence. The album was famously delayed for nearly a year through circumstances such as label shenanigans and a totally inappropriate cover designed by a hippie friend of guitarist Gary Holt (although that same guy also designed the Exodus logo, so maybe hippies are more brutal than is commonly believed). While the album languished, the Bay Area was flooded by bootleg recordings of the album. One wonders if Holt ever bragged to Lars Ulrich that he was fighting music piracy before it was cool.

Bonded by Blood is about riffs. It has no time for anything that’s not a riff. It demonstrated Gary Holt’s prowess as a rhythm guitarist, almost to the expense of the rest of the music. It’s the canonical example of thrash metal songwriting, where you get your best guitarist to improvise riffs for an hour, takes the five best ones, and presto, that’s a song. There’s just not a lot of thought given to anything that doesn’t have six strings.

The title track features a bruising yet intricate main riff, reminiscent of THAT part in “Fight Fire with Fire”, where even when you think you understand what’s happening on the fretboard you probably don’t. But chorus is boring and shapeless, with the guitars and drums and vocals all doing three different things. The band themselves seem to think “Bonded by Blood”‘s chorus is underwhelming: when they re-recorded the song with Rob Dukes in 2012 they added a bunch of extra drum fills to try and make it more interesting. The exact same problem occurs over and over.

The band doesn’t really “get” songwriting.  They repeat vocal patterns from song to song (“Bonded by Blood” has the same verse as “Exodus”), Tom Hunting ride the same punk rock d-beat for half the album, and when they hit paydirt with a certified classic like “Strike of the Beast” and “A Lesson in Violence”, it seems almost accidental. The riffs are amazing, but they need to be. They’ll all the album has.

Paul Baloff sings on this album. It was the only studio LP he recorded in his life, and it made him a legend. I wish he lived up to the hype.

He sings like a drunk man pisses, squealing and yelping and cackling and generally flinging his voice all around the place. Maybe he’s not Darkwing Duck, but his voice has a definite cartoon character quality. You know when the villain sings his “I am evil” song? That’s Baloff. He’s hilarious and sounds like he’s having the time of his life, but the album would be much better with an actual performance on it.

So the vocals aren’t so hot, and the recorded-in-the-toilet quality vocals do Baloff no favors. Even the album’s best cuts rely on speed and power to overwhelm their shortcomings, and the bad songs could literally be modern pizza thrash shit if they were 10-15% stupider.

Slayer’s transcendental heaviness on “Chemical Warfare”. Metal Church and Metallica’s sophistication. Bathory and Celtic Frost stepping outside the confines of thrash entirely and forging a new, blackened path. Next to those bands and albums and moments, Bonded by Blood is well-executed but a little stunted: a 40 minute exposition of Gary Holt’s right hand. The Bay Area sound was already burning itself out, and incorporating new sonic influences out of sheer necessity. Baloff was wrong, and the posers were right: thrash metal ultimately had to evolve or die.

I enjoy many parts of Bonded by Blood, but the popular perception of it as a paragon of metalness that we’ve all strayed from seems a little wrong. This is a powerful but limited album in a powerful but limited style. Where do you go from here, now that you’ve stretched Bay Area thrash to its limits? What does Bonded by Blood 2, 3, 4 etc sound like? How many times can you bang your head against the stage?