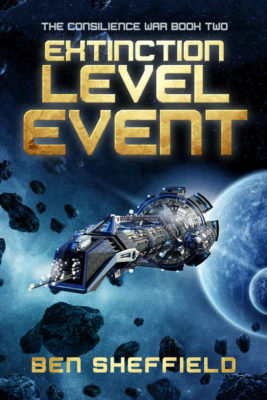 It is the year 2142. The planet Caitanya-9 has vanished from the heavens, along with its promises of doom. Only Sarkoth Amnon knows the full truth. The planet was a superweapon, created by a race of godlike aliens for the very purpose of their own extinction. Its power is now in the hands of a psychopathic madman called Wake, a man who has every reason to hate Amnon and the empire he now controls. Moments before the apocalypse, he disappeared with the planet to regions unknown. He left behind a single promise: he will be back.

Amnon has returned to Terrus, and faces new problems. A doomsday cult that wishes to possess Caitanya-9 for their own ends, and which Amnon has just betrayed. A childhood friend, snatched from the planet, who might be the key to Amnon’s salvation or his ruin. In a world full of uncertainties and falsehoods, of treachery and lies, Sarkoth Amnon knows that only one thing is certain.

Caitanya-9 will return, and the skies will burn from horizon to horizon.